Intoduction of ProbabilityProbability is a very popular topic of the Mathematics syllabus of the IIT JEE. It is not considered to be a very simple topic, but it is important to master the topic in order to remain competitive in IIT JEE. Majority of the students find it difficult to master this topic because their basics are not clear. In this chapter, we shall study the methodologies of computing the probability of an event, be it complex or simple. We shall try to comprehend the tools used for this purpose. In an attempt to make the subject easily comprehensible and clearly understandable a large number of illustrations and problems are selected and solved. Every aspect is fully supported by sufficient number of relevant examples. The students will note that for the understanding of the subject matter of this chapter, the knowledge of permutation and combination is essential.We shall first throw some light on the meaning of probability and then proceed toward the various terms related to it.Examples of Probability

In each of the above sentences there are different degrees of certainty of results.This degree of certainty can be measured with the help of Probability.Hence, Probability in general terms can be described how likely something will happen.A Simple Example of ProbabilityTossing a fair (unbiased) coin. There are 2 possible outcomesHead (H) orTail (T) 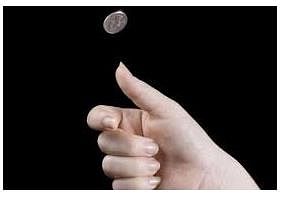 As the coin is unbiased, the possible outcome of ‘head’ and ‘tail’ is equally probable.Since there are no other outcomes possible, the probability is ½ (i.e. 50%) of either “head” or “tail”.In other words, probability that head will occur is 1 out of 2 outcomes and probability of tail is also 1 out of 2 outcomes.Probability is a guide, it never tells us exactly or accurately what will happen, rather just an ideaFor Example: When a coin is tossed 100 times, how many heads will come up?As per our above example, probability that head turns up is ½, so expected is 50 Heads.But when we actually try it, we might get 46 or 45 or 57 heads. But in most cases the number will be around 50.What do you mean by the Term Probability?In simplest possible words, probability is the degree of likeliness of the happening of an event. It is not always possible to predict an event with total certainity. In such circumstances, the concept of probability is used to predict how likely are they to happen or not. It may also be defined as a measure or estimation of likelihood of occurrence of an event. Probabilities are given a value between 0 (0% chance or will not happen) and 1 (100% chance or will happen). The higher the degree of probability, the more likely the event is to happen, or, in a longer series of samples, the greater the number of times such event is expected to happen.We disucss this in detail with the help of following examples:
1. Throwing a dice: When we throw a dice, there can be six possible outcomes. We can get any number among 1 to 6 and hence the total number of possible outcomes is 6. The probability of getting any number from 1 to 6 is therefore 1/6.  But what is the probability of getting a 7 on the throw of a dice?  Since it is not possible to get a 7 on a dice hence, its probability is zero.

It is clear form the above examples that probability of an event just denotes the possibility of its occurence or non-occurence. Hence, we get the following formula:Probability of occurence of event A = P(A) = Number of favourable outcomes/ Total number of outcomesProbability Line 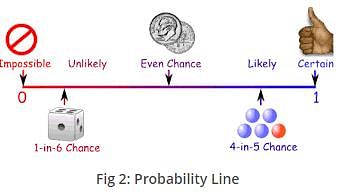 Probability is always between 0 and 1What is Probability and Statistics?Probability and Statistics is a branch of Mathematic s that studies the possible outcomes of events and analysis of random phenomena, interpretation and display of numerical data. The outcome of random event cannot be determined before it occurs, but it may be one of the several possible results or outcomes. The actual outcome is to be determined by chance. Probability has many applications in the field of Statistics, Science and Technology, Economics, etc.Remark: 1. The number of outcomes favourable to A are denoted by n(A) and total number of outcomes in sample space are denoted by n(S). Hence, the above formula becomes P(A) = n(A)/n(S).2. The probability of an event can vary between 0 to 1, i.e. 0 ≤ p ≤ 1.3. Probability can never be negative.4. Probability of occurence of an event = 1 – (Probability that it doesn’t occur).

Illustration 1:
A glass jar contains 5 red, 6 green, 3 blue and 8 yellow coins. If a single coin is chosen at random from the jar, what is the probability of choosing a red coin, a green coin, a blue coin or a yellow one?Solution:The possible outcomes of the experiment are red, green, blue and pink. Using the above mentioned formula, we have 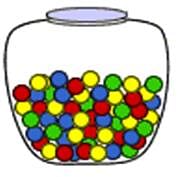 The various topics covered in this chapter are listed below:

All the above topics have been discussed in detail in the coming sections. Here, we shall just give a brief outline of each of them:Experiment or TrialAn experiment or a trial refers to an action whose result is not certain. Some examples of trials include tossing a coin, throwing dice, drawing a card from a deck of cards.Experiment: An operation which can produce some well-defined outcome(s).There are two types of expreriment:

For Example: Experiments which are conducted to verify the laws of science or established laws of other areas 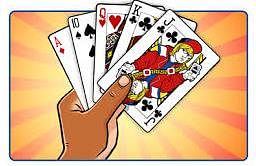 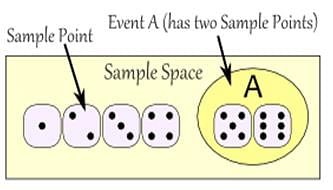 EventA single result of an experiment is called an event. Some examples of events include getting a tail on the toss of a coin is an event.Types of EventsElementary Event: An outcome of a random experiment is known as an elementary event.Example: Consider the random experiment of tossing of a coin. The possible outcomes of this experiment are head (H) or tail (T).Thus,E1 = Getting head (H) on the upper face of the coin,AndE2 = Getting tail (T) on the upper face of the coin.Then E1 and E2 are elementary events associated with the experimentCompound Event: If an event obtained from a random experiment is by combining two or more elementary events associated to the random experiment.Example: In a single throw of a die, the event “Getting an even number” is a compound event obtained by combining elementary events 1, 3 and 5.Certain Event: The event which contains all the sample points of sample space is called a certain event.Example: A random experiment of a card drawn at random from a pack of 52 cards. Let event A: card drawn is either red or black.Therefore, Event A is a certain eventImpossible Event: An event which does not contain any sample point of the sample space S is called as impossible event. Null set Ø represents an impossible event.Example: Let event B: die shows a number greater than 6Therefore, B= {} = ØComplement of an EventLet A be an event of Sample Space S. The set of all outcomes which are in S but not in A is called complement of the event A and is denoted by A’. 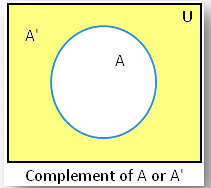 Fig 5: Complement of EventMutually Exclusive Events (Disjoint Events)Let S be the sample space. A and B be two events of S. Events A and B are said to be mutually exclusive if they do not have any sample point in common. 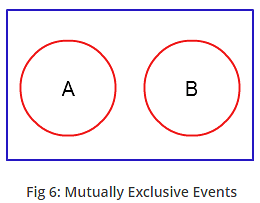 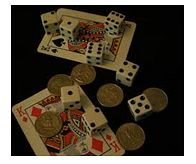 Suppose a coin is flipped 2 times. This statistical experiment can have 4 possible outcomes: HH, HT, TH, and TT. Let variable X represents the number of Heads that result from this experiment. The variable X can take the values 0, 1 or 2. In this example, X is a random variable.A probability distribution is a table or an equation that links each outcome of a statistical experiment with its probability of occurrence. The below table shows each outcome associated with its probability with reference to the above experiment conducted with X as no of heads.

Conditional ProbabilitySometimes the probability of a given event depends on the occurrence or non-occurrence of some other event. 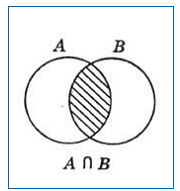 Then the probability of exactly k successes in n trials is given byPk = nCkqn-kpkAssumptions of Binomial Distribution1. The number of observations n is fixed.2. It gives one of the two possible outcomes, say 'success' (when required event take place) and failure (when required event does not take place)3. Each trial has the same probability of success.4. Each trial is mutually exclusive.5. The probability of getting at least k successes is P(x > k) = Σnx=k  nCx px qn-x6. Σnx=k  nCx qn-x px = (q + p)n = 1.7. Mean of binomial distribution is np.8. Variance is npq,9. Standard deviation is given by (npq)1/2, where n,p and q have their meanings as described above.Important assumptions have been depicted below in the form of chart: 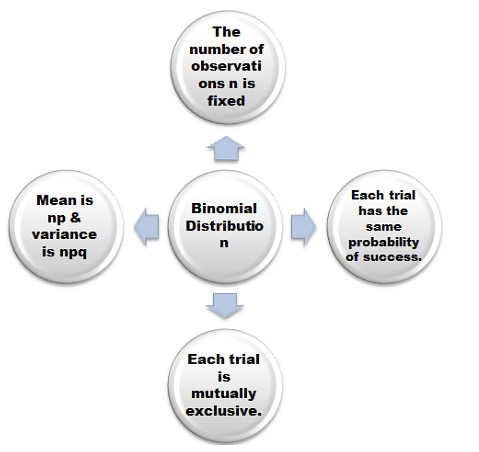