Building Blocks of Life And Their Functions 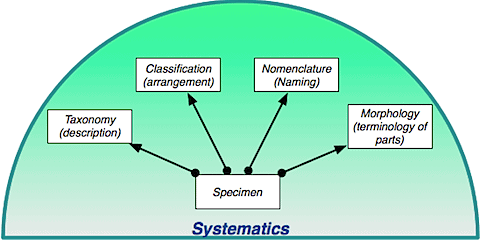 Try yourself:Systematics is the study of
Explanation

Systematics, study of diversity amongst groups of organisms.

Taxonomy is of 6 types: Only morphological characters are used for the identification and classification of plants.

Analysis and synthesis of all information and types of data to develop a classification system based on the phylogenetic relationship.

(iv) Cytotaxonomy: The use of cytological characters of plants in classification or in solving taxonomic problems is called Cytotaxonomy.

(vi) Karyotaxonomy: It is based on the characters of the nucleus and chromosomes. The pattern of chromosome bands (dark bands and light bands) is the most specific character for classification of organisms.

Try yourself:According to binomial nomenclature, every living organism has
Explanation

Every living organism has one scientific name with two components. (ii) Genus: It is an assembly of a group of similar species which involved from a common ancestor and have certain common characters called correlated characters. But it is not mandatory to have many species. Monotypic genera have only one species. Polytypic genera have more than one species.Example: Cat and leopard are put in the genus Panthera.

(iii) Family: It is the collection of similar genera. Families are characterised on the basis of reproductive and vegetative features. For example, the lion and tiger are included in the family Felidae.

(iv) Order: Being a higher category is the assembly of one or more than one similar families. Family Felidae is included in the order Carnivora.

(v) Class: A class is a subdivision within a phylum made of one or more than one order. Class Mammalia includes all mammals which are monkey, gorilla, gibbon and man.

(vi) Phylum: It comprises of a collection of similar classes. Phylum Chordata of animals has class Mammalia along with fishes, reptiles, birds, and amphibians.

(vii) Kingdom: All animals belonging to various phyla are assigned to the topmost taxonomic category called kingdom. Example all animals are included in Kingdom Animalia. All plants are included in kingdom Plantae. The unit that denotes grouping of the organism based on observable features is known as Taxon. 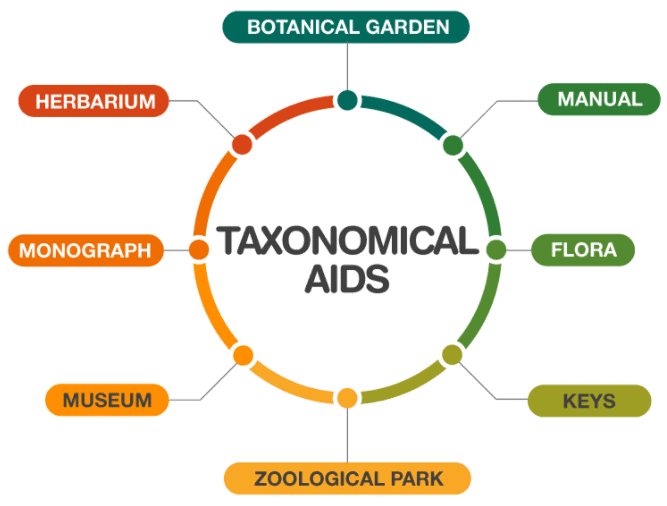 Try yourself:Amongst the given taxonomic aids, how many are associated with preservation of specimens?

Preservation of specimens is done in taxonomic aids