where V is the external potential within which the body moves.

The angular momentum L is the generalized momentum conjugate to the angular coordinates. As usual, we can write

In general the angular momentum is not parallel to the axis of rotation of the body.Since I deﬁnes three independent principal axes,

, one can decompose any vector into a linear sum of components alone each of these axes. So, using the decomposition

In the special case when two of the ωi vanish, i.e., the angular velocity is initially in the direction of one of the principal axes, then L is parallel to the ω.

The equations of motion

In the inertial space frame, the Lagrangian is given by

and another for the rate of change of ω. We have earlier discussed why  θi  do not form the components of a vector, but

where the gradient contains partial derivatives with respect to the components of R. In the absence of external forces, F = 0. The remaining three equations of motion are

where M is the external torque acting on the body.

Representing a rigid body by N particles ﬁxed to each other,

Here the x are taken in an inertial frame. Then,

where f i is the force on the i -th body. The forces of constraint satisfy f ij = −f ji . If there were only forces due to constraints, then

As a result, this would be zero. Therefore, the net torque on the body is due to external forces only. When F = 0, the torque is called a couple. . The direction of L and ω do not coincide in general. Since all directions perpendicular to

are equivalent, we can choose the

directions at some time t so that L and ω are in the 13-plane. Then, since

axis is in the

This is independent of t . So, the axis

; this is called spin. If 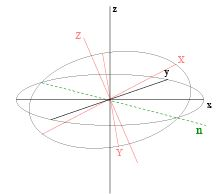 Take the xyz axes to be the inertial space frame. Orient the body frame XYZ along the principal axes. If the spin velocity around

Check that the angular velocity in the space frame, ω, is related to the rate of change of the Euler angles by

Construct the rotational term in the kinetic energy using these expressions. Specialize to the cases of the spherical top and the rigid rotator and check that the correct description of free rotations is obtained in both these cases.

Problem 56: Precession in Euler angles For a symmetric top with I1 = I2 = I3, with the symmetry axis along

, choose one of the principal axes along

Problem 57: Symmetric top with a couple Take a symmetric top with I1 = I2 = I3 subject to the potential V = M cos γ . Write the Lagrangian for this problem and ﬁnd the conserved quantities and the cyclic coordinates. Using these, reduce the problem to one-dimension. Describe the general character of the motion, including nutations.

In the special case when F and M are orthogonal, one can ﬁnd a spatial vector a such that

Now, for any vector a(λ) = a + λF, the above equation is also satisﬁed. Additionally, if one shifts the origin of coordinates to x' = x − a, then the torque becomes M' = M − a × F = 0. So, for any of these choices of coordinate systems, the external torque vanishes if in another system the force and torque are orthogonal.

Problem 58: A linear equation Given vectors F and M, one can ﬁnd a vector a such that M = a × F, because these are three equations in 3 unknowns.Examine the linear equations in the components of a and ﬁnd what is special about them when F and M are orthogonal.

The trivial case is realistic

When the force ﬁeld is uniform, one can write each of the

In the case where the forces are purely gravitational, X = R, and the torque about the center of mass vanishes, as it does along any line in the direction of the force along the center of mass.This is relevant to the problem discussed on September 12, and given in the mid-sem. For a satellite moving in an orbit far larger than the radius of the earth, the tidal forces may be neglected if the satellite is small. In this case the gravitational force on the satellite is exactly as above, and the motion can be analyzed as if there were no torque.

The simplest description of a rotating body is found in the body frame with axial directions chosen along the principal axes of the body. Clearly, for any vector

where the subscript i refers to the change in the inertial system and r to the change in a system rotating with angular velocity Ω.Using this we get Euler’s equations for rigid bodies in the body frame