Look at the bottom of the cover page of your textbook. It says-‘ Textbook for class VI’. This numeral VI is 6 in the Hindu-Arabic system. Likewise, if we look around we can spot various Roman numerals. Many watches have numbers written in Roman numerals. Thus although Hindu-Arabic numerals are most widely used, the Roman numerals often appear in our daily lives.

Some basic Roman numerals are 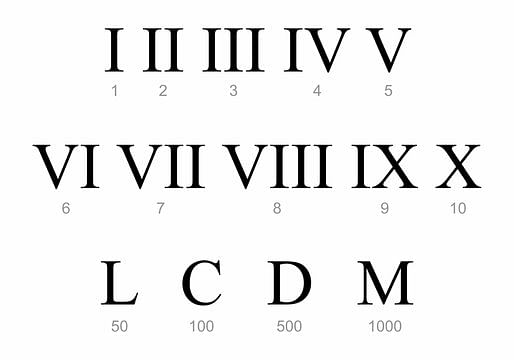 Roman numbers follow certain rules, which helps determine how the number is written. It will also help us in reading or recognizing roman numbers. Let us take a look.

First, we must understand the use of brackets in mathematics. It is a very important part of forming and solving equations. Let us take an example. You went to the store to buy chocolates. You went a little overboard and bought ten chocolates. Two of them cost Rs. 10/- each, seven of them were Rs 5/- each and one was for Rs 30/-. Now how will you represent this mathematically?

However doesn’t the above equation seem very confusing? And if someone was asked to solve it he would be prone to errors and miscalculations. So let us conjure a better way of forming this equation using brackets.

Doesn’t this make much more sense? It is an organized and systematic representation of the scenario. And the person solving the equation will have a better understanding as well. So you can see how the use of brackets is quite essential in mathematics.

Now moving on to the BODMAS rule. In the above equation, we saw that we were performing two operations, namely addition and multiplication. But imagine that in an equation you had to perform more such operations. It would be confusing. And which operation will you perform first? Take for example the following equation. 23 × 7 + 78 ÷ 2 = ? So how do you solve such a problem? This is where the BODMAS rule comes in. It gives us an order in which to perform the mathematical operations in a given problem or equation.It is actually an acronym and goes as follows

This is the order in which you perform the operations to arrive at the correct answer. You first solve the operations within the bracket. This is called “opening the bracket’. Then you move on to division, after which you perform multiplication if the equation requires it from left to right. And finally, you add the numbers and lastly perform the subtraction.The best way to understand the BODMAS rule is through examples. So let us see a few problems and solve them using BODMAS.