As seen, k is varied from 0 to ∞ the root tends to move left side of the s-plane which means gaining more stability. Thus the system is stable for k ϵ [0, ∞). For 0 < k < ∞, the poles are in negative s-plane and move away towards left side. Hence the system is stable.

Number of Lines in Root Locus

Rules of Construction of Root Locus

Now, if we have to construct root locus from a given transfer function, there are some rules that need to be followed

Example: We have a system with open loop gain G(s) =

and feedback H(s) = 1 Sketch the root locus of the system and comment on the stability of the system.  Solution: We have G(s)H(s) = 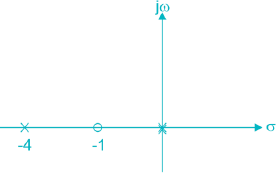 Since the root locus remains in left half, the system will be stable except for when it is marginally stable at origin point.