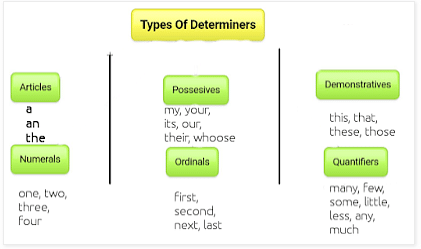 1. A, An, TheA and an are used before countable Singular Nouns. A is used before a word beginning with a consonant sound, while an is used before with a vowel sound ; as,A pen is to write with.An elephant is a huge animal.Our hen laid an egg today.The is a weakened form of that : The is used to particularise a person or a thing ; as,Bring me the book lying on the table.The dish you prepared was very delicious.

2. This, That, These, ThoseThis, that, these and those point to objects denoted by the Nouns that follow them ; as,

This man is a raw villager.That horse runs very fast.These mangoes are very sweet.Those girls must be rewarded.

3. My, Our, Your, His, Her, Its, Their, One'sThese are Possesive forms of Pronouns. They can be used before Singular and PluralNouns ; as,

My father was a famous physician.Our school shows brilliant results every year.Your sister is absent today.Her books lie scattered in the room.Their houses are newly built.One must do one's duty.

4. One, Two, Three... etc.He is blind in one eye.She has two daughters.Only three boys are sitting in the room.

5. Each and EveryEach is used for two or more persons (definite) while every is used for more than two persons or things (indefinite) ; as,Each boy must have his own book.Every man is expected to do his best.

6. No, Any and SomeNo and Any are used in Negative and Interrogative sentences, while Some is generally used in Affirmative sentences ; as,There is no high school in this village.He didn't buy any thing from the market.

(ii) In a question which shows some request or invitation :Will you have some milk?Will you show me some pens?

Study the use of some in Negative Interrogation sentences.Didn't I give you some money yesterday?Won't you give me some more books?

AnyWe can use any with countable or uncountable Nouns both in the Singular and Plural numbers.

(i) In negative sentences:I haven't any spare pen.She did't send me any reply.

(ii) In interrogative sentences:Is there any news?Didn't you lend him any money?

(iii) After 'hardly', 'scarcely' and 'barely' :There is hardly any milk in the milk pot.She had scarcely any body to fall back upon.I had gone hundred yards barely, any one could give me the news.

(iv) After 'if' when there is some doubt :If you have any difficulty in solving the questions, come to me.If there is any danger, blow the whistle.

7. (b) All and WholeThe is used after all but before whole.All the boys played traunt.The whole class was out,

All is used with both countable and uncountable nouns.All my books have been lost.All her milk was sold in no time.

8. Either and NeitherEither means one of the two persons or things.Neither is the opposite of Either.

I can speak on either (neither) side.You may buy either of these two pens.Neither of them could speak on the stage.

9. (a) Many, Much, Few, A Few, Less and Several :Many denotes number, while Much denotes quantity. Few is the opposite of 'Many' and Less is the opposite of Much, Several means Many. There are many flowers in this garden.There is much sugar in stock.We have few holidays in school.A few students came to attend the lecture.You devoted less time to your studies.Several people paid homage to the independent leader.

9. (b) Study the use of many, many a, much, few, a few, the few, little, a little, and the little.(i) Many, many a, much :Many is followed by a plural number while many a by a singular number ; as,Many students were absent yesterday.Many a man has died of cholera.

Much denotes quantity while many denotes number.I have much work to do.

(ii) Few, a few, the few :Few means not many, hardly any ; a few means some ; the few means not many but all of them ; as, I have few friends. He is a man of few words.I shall return this book in a few days.I have read the few books I had. (shows number).