The discharge is measured at a specific point in a river and is typically time variant.

A rainfall defined in time and space that falls on a catchment produces a hydrograph.Given figure defines certain essential elements of the hydrograph resulting from a hyetograph( Rainfall intensity vs. time). 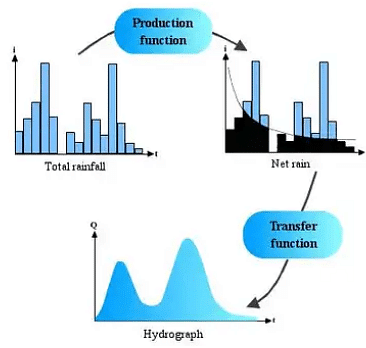 To describe the processes that occur when the rain is transformed into a flow hydrograph (by Horton's postulate), we apply two functions called production function and transfer function. The production function allows determination of the net rain hyetograph starting from the total rain. The transfer function allows determination of the hydrograph resulting from the net rain. The net rain represents the part of total rain that contributes to the flow process.

It can be defined:

Types of hydrograph can include:

This method was first suggested by Sherman in 1932 and has undergone many refinements since then.

A UH is specific to a particular watershed and specific to a particular length of time corresponding to the duration of the effective rainfall. That is, the UH is specified as being the 1-hour, 6-hour, or 24-hour UH, or any other length of time up to the time of concentration of direct runoff at the watershed outlet. Thus, for a given watershed, there can be many unit hydrographs, each one corresponding to a different duration of effective rainfallThe following are essential steps in deriving a unit hydrograph from a single storm:

A unit hydrograph for a particular watershed is developed for a specific duration of effective rainfall. When dealing with a rainfall of different duration a new unit hydrograph must be derived for the new duration. The linearity property implicit in the UH analysis can be used to generate UH’s associated with larger or smaller effective rainfall pulse duration. This procedure is sometimes referred to as the S-curve Hydrograph method. 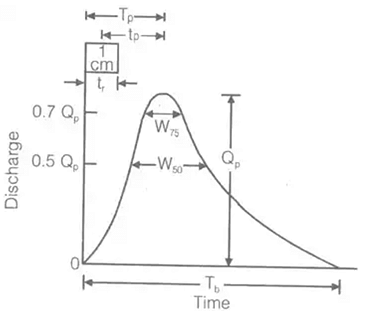 (i) tp = Ct[L . Lca]0.3Where,tp = Time interval between mid-point of unit rainfall excess and peak of unity hydrograph in hourL = Length of main streamLCa = The distance along the main stream from the basin outlet to a point on the stream which is nearest to the centrod of basis (in KM)Ct = Regional constant 0.3 < Ct 0.6

for the small catchment.