The amount of precipitation flowing over the land surface and the evapotranspiration losses from land and water bodies were discussed in Lesson 2.1. This water ultimately is returned to the sea through various routes either overland or below ground. Evaporation from the ocean, which is actually a large water body, contributes to the bulk of water vapour to the atmosphere, driven by the energy of the sun. This process completes the hydrologic cycle (Figure 1), which keeps the water content of the Earth in a continuous dynamic state. 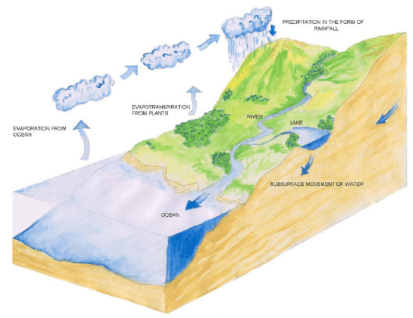 In this lesson, we would study the fate of the raindrops as they fall on the earth and flow down the land surface to meet streams and rivers. Part of the water, as it flows down the land surface, infiltrates into the soil and ultimately contributes to the ground water reserve.

During a precipitation event, some of the rainfall is intercepted by vegetation before it reaches the ground and this phenomenon is known as interception. At places without any vegetation, the rain directly touches the land surface. This water can infiltrate into the soils, form puddles called the depression storage, or flow as a thin sheet of water across the land surface. The water trapped in puddles ultimately evaporates or infiltrates. If the soil is initially quite dry, then most of the water infiltrates into the ground. The amount of rainfall in excess of the infiltrated quantity flows over the ground surface following the land slope. This is the overland flow. The portion that infiltrates moves through an unsaturated portion of the soil in a vertical direction for some depth till it meets the water table, which is the free surface of a fully saturated region with water (the ground water reserve). Part of the water in the unsaturated zone of the soil (also called the vadose zone) moves in a lateral direction, especially if the hydraulic conductivity in the horizontal direction is more than that in vertical direction and emerges at the soil surface at some location away from the point of entry into the soil.  This phenomenon is known as interflow. Figure 2 illustrates the flow components schematically. 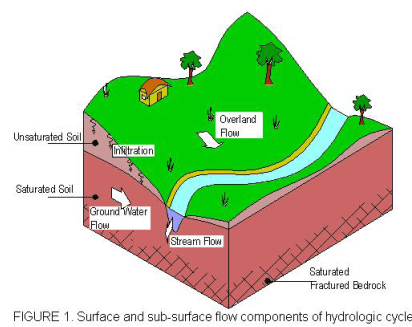 Please note the meaning of the term Hydraulic conductivity:

Hydraulic conductivity is a measure of the ability of a fluid to flow through a porous medium and is determined by the size and shape of the pore spaces in the medium and their degree of interconnection and also by the viscosity of the fluid. Hydraulic conductivity can be expressed as the volume of fluid that will move in unit time under a unit hydraulic gradient through a unit area measured at right angles to the direction of flow.

If the unsaturated zone of the soil is uniformly permeable, most of the infiltrated water percolates vertically. Infiltrated water that reaches the ground water reserve raises the water table. This creates a difference in potential and the inclination of the water table defines the variation of the piezometric head in horizontal direction. This difference in energy drives the ground water from the higher to the lower head and some of it ultimately reaches the stream flowing through the valley. This contribution of the stream flow is known as Base flow, which usually is the source of dry-weather flow in perennial streams.

During a storm event, the overland flow contributes most of the immediate flow of the stream. The total flow of the stream, however, is the sum of overland flow, interflow and base flow. It must be remembered that the rates at which these three components of runoff move varies widely. Stream flow moves fastest, followed by interflow and then ground water flow, which may take months and sometimes even years to reach the stream.

Note that for some streams, the water table lies quite some distance below the bottom of the stream. For these streams, there is a loss of water from the river bed percolating into the ground ultimately reaching the water table.  The reason for a low water table could possibly be due to natural geographic conditions, or a dry climate, or due to heavy pumping of water in a nearby area.

The hydrograph and hyetograph As the name implies, Hydrograph is the plot of the stream flow at a particular location as a function of time.  Although the flow comprises of the contributions from overland flow, interflow and groundwater flow, it is useful to separate only the groundwater flow (the base flow) for hydrograph analysis, which is discussed in Lesson 2.3.

In Lesson 2.1, precipitation was discussed. The hyetograph is the graphical plot of the rainfall plotted against time. Traditionally, the hyetograph is plotted upside down as shown in Figure 3, which also shows a typical hydrograph and its components. Splitting up of a complete stream flow hydrograph into its components requires the knowledge of the geology of the area and of the factors like surface slope, etc. Nevertheless, some of the simpler methods to separate base flow are described subsequently. 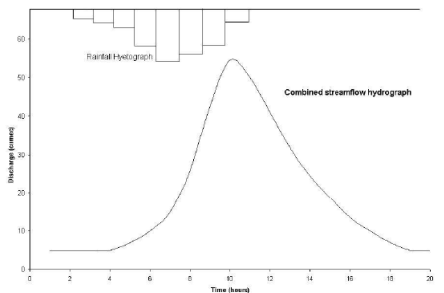 The combined hydrograph can be split up into two parts: The base flow (Figure 4) and the overland flow added to interflow (Figure 5) 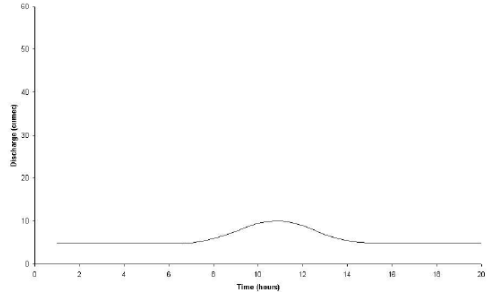 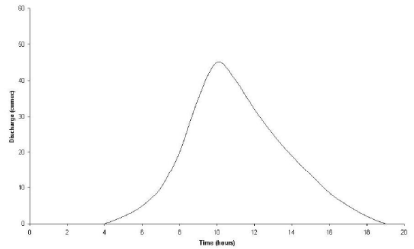