A part of the rainfall reaching the earth’s surface infiltrates into the ground and finally joins the ground water reservoirs or moves laterally as interflow. Of the interflow, only the quick response or prompt interflow contributes to the immediate rise of the stream flow hydrograph. Hence, the rainfall component causing perceptible change in the stream flow is only a portion of the total rainfall recorded over the catchment. This rainfall is called the effective rainfall.

Methods of base flow separation

Consider the total runoff hydrograph shown in Figure 3, for which the corresponding effective rainfall hyetograph over the catchment is known. In this example, the flow in the stream starts rising at about 4 hours, and the peak is seen to reach at about 10.5 hours. The direct runoff is presumed to end at about 19.5 hours. Though we have separately shown the base flow and the direct runoff in Figures 4 and 5, it is only a guess, as what is observed flowing in the stream is the total discharge. A couple of procedures are explained in the following sub-sections to separate the two flows. For this, we consider another hydrograph (Figure 6), where the total flow is seen to be reducing initially, and then a sudden rise takes place, probably due to a sudden burst of rainfall. 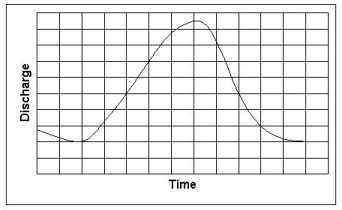 Method 1 One method to separate the base flow from the total runoff hydrograph is to join points X and Z as shown in Figure 7. This method is considered not very accurate, though. Method 2 This method suggests the extension of the base flow graph (Figure 8) along its general trend before the rise of the hydrograph up to a point P directly below the runoff hydrograph peak. From P, a straight line PQ is drawn to meet the hydrograph at point Q, which as separated from P in the time scale by an empirical relation given as:

Where, A is the area of the drainage basin in square kilometers. 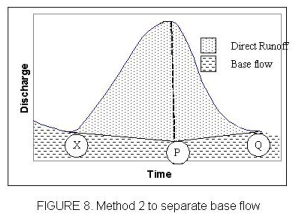 Method 3 The third method makes use of composite base flow recession curve, as shown in Figure 9. The following points are to be kept in mind:

B – Q  follows the trend of the later stage base flow recession curve.

B is chosen to lie below the point of inflection (C) of the hydrograph. 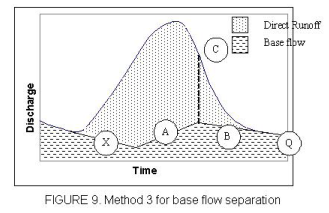 The hydrograph after separating and the base flow results in what is called the Direct Runoff Hydrograph. 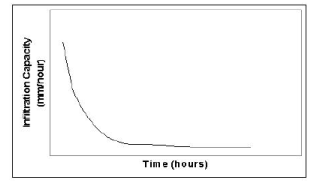 Interestingly, if the supply of continuous water from the surface is cutoff, then the infiltration capacity starts rising from the point of discontinuity as shown in below. 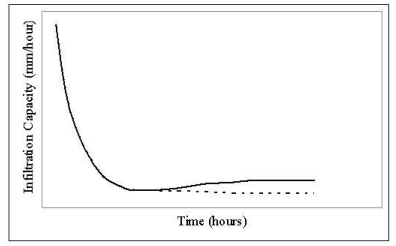 FIGURE 11. Infiltration capacity rising after supply from top is cut off

For consistency in hydrological calculations, a constant value of infiltration rate for the entire storm duration is adopted. The average infiltration rate is called the Infiltration Index and the two types of indices commonly used are explained in the next section.

The two commonly used infiltration indices are the following:

This is defined as the rate of infiltration above which the rainfall volume equals runoff volume, as shown in Figure 12. Thus, W  may be mathematically calculated by dividing the total infiltration (expressed as a depth of water) divided by the time during which the rainfall intensity exceeds the infiltration rate. Total infiltration may be fund out as under:

The W – index can be derived from the observed rainfall and runoff data. It differs from the - index in that it excludes surface storage and retention. The index does not have any real physical significance when computed for a multiple complex watershed. Like the phi-index the - index, too is usually used for large watersheds.