Even though a lot of the concepts here have been discussed earlier, they are repeated for convenience

Broadly memories can be classified into

The following diagram shows the organization of a Memory This memory consists of two address decoders viz. Row and Column decoders to select a particular bit in the memory. If there are M rows and N columns, then the number of bits that can be accessed are

Either a read operation or a writeoperation can be done on any selected bit by the use of control signals.

RAMs are once again classified into two types:

30.2 SRAM And Its Peripherals Figure 30.21 shows a standard 6 transistor SRAM cell. The signal designed as WL is the WORDLINE used to read or write into the cell. BL  and

are the data to be written into the cell. 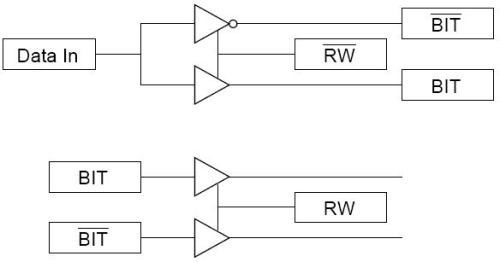 Fig 30.22: Circuit for reading and writing data into cell

The circuits shown in the previous page are used to write and read the data to and from the cell. When a read operation is to be performed, RW  signal is made HIGH and at the same time

is made LOW. As a result the data present on the BIT and

During the write operation, RW, is made LOW and

is made HIGH. Thus the DATA and

will be written onto the BIT and

However the read and write operation on a particular cell takes place only if the cell is enabled by the corresponding row(Word) and column(Digit) lines. It is important to remember that before every read operation, the  BIT and

are precharged to a voltage (usually VDD/2). During read operation, one of the two BIT (

) lines discharges slightly whereas the other line charges to a voltage slightly greater than its precharged value. This difference in these voltages is detected by the sense amplifier to produce and output voltage, which corresponds to te stored value in the cell which is read. Care should be taken in sizing the transistors to ensure that the data stored in the cell does not change its value.

The circuit shown in Figure 30.31 is the sense amplifier used to read data from the cell. As soon as the SE signal goes HIGH the amplifier senses the difference between the Figure 30.31 shows the block diagram of a memory cell with all the peripherals Fig 30.32: Block Diagram Of A Memory Cell With All Its Peripherals

30.4 Another Type of Sensing In the above figure,

is the signal used to precharge the BIT and B lines before every read operation. The transistor labelled EQ is the equalization transistor to ensure equal voltages on BIT long and

lines after precharge. SE is the sense enable signal used to sense the voltage difference between the 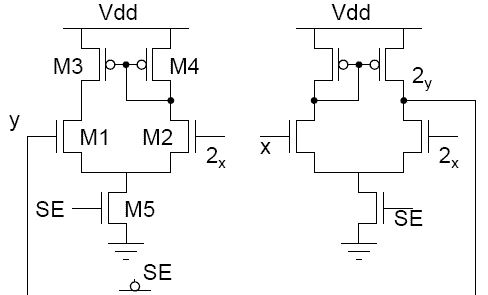 30.5 DRAM And Its Peripherals