The document Sample Paper 1 with Solution - Chemistry, Class 11 NEET Notes | EduRev is a part of the NEET Course Sample Papers for Class 11 Medical and Non-Medical.
All you need of NEET at this link: NEET

Ques 1: Explain why o- nitrophenol has a lower boiling point than p – nitrophenol? [1]ORWhich of the two -O2NCH2CH2O- or  CH3CH2O- is expected to be more stable and why?Ans: This is because o – nitro phenol has intramolecular hydrogen bonding whereas p- nitro phenol has intermolecular hydrogen bonding.ORO2NCH2CH2O- will be more stable because -NO2 group has electron withdrawing inductive effect or – I effect.Ques 2: Out of CO2 and BF3 , which one of them will have a larger bond angle and why? [1]ORWhy N2 is more stable than O2? Explain on the basis of molecular orbital theory.Ans: CO2 has a larger bond angle than BF3 . This is because CO2 has a linear shape and the bond angle is 180o, BF3 on the other hand has a trigonal planar geometry and hence the bond angle is 120o.ORBond order of N2 is greater than that of O2. Higher is the bond order greater is the stability. Therefore N2 is more stable than O2.Ques 3: Is the eclipsed conformation of propane has the same or different energy as the eclipsed conformation of ethane? [1]Ans: The eclipsed conformation of propane is less stable and has more energy than the eclipsed conformation of ethane. This is because in propane there are additional interactions between C-H and C-C bond of methyl group.Ques 4: Due to which compound, ozone depletion is caused in Antarctica? [1]Ans: In Antarctica, ozone depletion is due to the formation of chlorine nitrate.Ques 5: Why are alkali metals used in photoelectric cells? [1]Ans: Alkali metals have low ionization energies. They can lose electrons when light falls on them, and hence are used in photo electric cells.

Ques 6: Which of the following statements related to the modern periodic table is incorrect and why? [2](a) Each block contains a number of columns equal to the number of electrons that can occupy that sub shell. (b) The d - block has 8 columns, because a maximum 8 electrons can occupy all the orbitals in d - sub shell.      Ans: Statement ‘a’ is correct and b is incorrect.Statement ‘b’ is incorrect because d sub shell can have a maximum of 10 electrons. Therefore it has 10 columns and not 8.Ques 7: All transition metals are d-block elements but all d-block elements are not transition metals. Explain. [2]Ans: Elements in which transition of electrons to higher energy d-orbital cannot take place are not transition elements. Thus, elements like Zn, Cd and Hg in which all the d-orbitals are completely filled are not transition elements although they have been grouped with d-block.Ques 8: One of the spectral line of the caesium has a wavelength of 456 nm. Calculate the frequency of this line. [2]Ans: Given:λ =  456 nm= 456 * 10-9 mc = 3 * 108m/sWehave,

Frequency is 6.5×1014 HzQues 9:  PbO and PbO2 react with HCl according to the following reactions: [2]2PbO + 4HCl → 2PbCl2 + 2H2OPbO2 + 4HCl → PbCl2 + Cl2 + 2H2OWhy do these compounds differ in their reactivity?Ans: Oxidation number of Pb in PbO is +2 while in PbO2 it is +4. This causes the compounds to differ in their reactivity. While PbO reacts with HCl to give acid-base reaction, and PbO2 reacts with HCl to give redox reaction.2PbO + 4HCl → 2PbCl2 + 2H2O (acid-base reaction)PbO2 + 4HCl → PbCl2 + Cl2 + 2H2O  (redox reaction)Ques 10: Consider the reaction of water with F2 and suggest, in terms of oxidation and       reduction, which species are oxidized/ reduced. [2]ORComplete the following reactions:

F2 is the oxidizing agent and H2O is reducing agent.H2O is getting oxidized to O2 whereas F2 is getting reduced to F- ion.OR

Ques 11: Why do magnesium and beryllium not impart colour to the flame in the flame test? [2]Ans: The energy required to excite outer electrons in the atoms of Be and Mg does not lie in the visible range of radiation. Therefore, no absorption of radiation takes place and hence no colour is imparted to the flame in the flame test.Ques 12: Calculate the mass percent of different elements in sodium sulphate,(Na2SO4) [2]ORHow much copper can be obtained from 100 g of copper sulphate (CuSO4)? (Atomic mass of Cu – 63.5 amu)Ans: Mass % of an element

So maximum 7 electrons will have same spin.(b) Six electrons are filled in three orbitals of 4p subshell. Ques 14: Explain the hybridisation of SF4 ? [3]OR(a) Although both CO2 and H2O are triatomic molecules, the shape of H2O molecule is bent while that of CO2 is linear. Explain on the basis of dipole moment. (b) Write the significance of dipole moment.Ans: The electronic configuration of S=1s22s22p63s23p4Ground state

Sulphur undergoes sp3d hybridisation.OR(a) In CO2 there are two C=O bond. Each C=O bond is polar bond. The net dipole moment of CO2 molecule is zero. This is possible only if CO2 is a linear molecule (O=C=O). The bond dipoles of two C=O bond cancel with each other.Whereas H2O molecule has a net dipole moment (1.84 D) H2O molecule has a bent structure because here the O-H bonds are oriented at an angle of 104.5° and do not cancel the bond moments of each other.(b) Significance/applications of dipole moment-i) In predicting the nature of the molecules: Molecules with specific dipole moments are polar in nature and those of zero dipole moments are non-polar in nature.ii) In the determination of shapes of molecules.iii) In calculating the percentage ionic character.Ques 15: The drain cleaner contains small bits of aluminium which react with caustic soda to produce dihydrogen gas.  What volume of dihydrogen at 20°C and one bar pressure will be released when 0.15 g of aluminium reacts. [3] Ans:

Volume of dihydrogen is 200.3 mlQues 16: (a) What is spontaneous process? [3](b) Predict in which of the following, entropy increases/decreases.i) A liquid crystallises into a solid.ii) Temperature of crystallise solid is raised from 0 K to 115 K

Ans:  (a) A process is said to be spontaneous if it takes place by itself by own or under some condition.(b) i) After freezing, the molecules attain an ordered state and therefore, entropy decreases.ii) At 0 K the constituent particles are in static form therefore entropy is minimum. If the temperature is raised to 115 K particles begin to move and entropy increases.iii) Reactant NaHCO3 is solid. Thus entropy is less in comparison to product which has high entropy.Ques 17: (a) Write the expression for equilibrium constant for the reaction: [3]

(b) According to Henderson’s equation,

Oxygen and Hydrogen atoms are balanced.OR Ans: (a) 3 – Methylpentanenitrile(b) 3-Chloropropanal(c) 4- Nitroaniline  Ques 21: (a) Arrange the following carbanions in the increasing order of their stability (3)

(b) What is the hybridisation of the negatively charged carbon atom in a carbanion?Ans: (a) Order of stability

This is because -CH3 group has electron releasing inductive effect or +I effect. Due to this, electron density increases on the negatively charged carbon and hence makes it more unstable. As the number of methyl groups increases the instability increases.(c) The negatively charged carbon atom in a carbanion is sp3 hybridized.Ques 22: Explain.[3](a) Alkali metals are prepared by electrolysis of their fused chlorides. (b) Why are lithium salts commonly hydrated and those of other alkali metal ions usually anhydrous?Ans: (a) Because the discharge potential of alkali metals is much higher than that of hydrogen, therefore when aqueous solution of any alkali metal chloride is subjected to electrolysis H2 instead of alkali metal is produced at cathode. Therefore alkali metals are prepared by electrolysis of their fused chlorides.(b) Due to smallest size of Li2+ can polarise water molecules easily than the other alkali metal ions.Ques 23: Calculate the molarity of a solution of ethanol in water in which the mole fraction of ethanol is 0.040. [3]Ans: Given:Mole fraction of C2H5OH = 0.040We know, 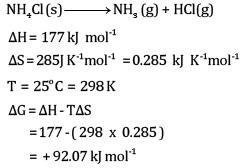 The reaction will be non-spontaneous.This is because the value of ΔG is positive.  OR

Ques 26: Explain giving reasons for the following: [5](a) Boron does not form B3+ ions.(b) Molten aluminium bromide is a poor conductor of electricity.(c) BCl3 is more stable than TlCl3.(d) B-Cl bond has a dipole moment but BCl3 has zero dipole moment.(e) Al is used to make transmission cables.OR
Explain the following reactions: (a) Silicon is heated with methyl chloride at high temperature in the presence of copper powder (b) CO is heated with ZnO (c) Reaction of boron trifluoride with LiAlH4 in diethyl ether (d) Reaction of boron trifluoride with sodium hydride at 450 K (e) Reaction of diborane and waterAns: (a) Boron has a very small size and has a very high sum of three ionisation enthalpies (IE1+ IE2+ IE3). Therefore, it cannot lose its three electrons to form B3+ ions.(b) AlBr3 is predominantly a covalent compound. Even in molten state it does not have ions which can conduct electricity.(c) B exhibits +3 oxidation state and can form stable BCl3. Thallium shows +3 oxidation state as well as +1 oxidation state but +1 oxidation state is more predominant than +3 oxidation state because of inert pair effect. Therefore, TiCl3 is not stable. It can form stable TiCl.(d) BCl3 molecule has a symmetrical trigonal planar structure in which three B-Cl bonds are oriented at an angle of 120° to one another. The three bonds lie in one plane and the dipole moments of these bonds cancel one another giving net dipole moment zero.(e) Electrical conductivity of aluminium is twice as that of copper. On mass to mass basis, Al conducts electricity twice as Cu. Therefore, it is used in transmission cables.OR 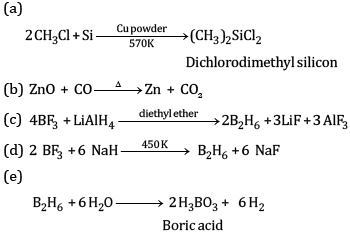 At cathode hydrogen is liberated. At anode ethane is formed.OR 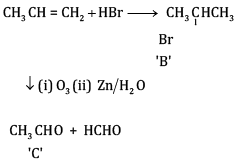