The document Sample Question Paper 1 - Term- 1 Social Science, Class 6 Class 6 Notes | EduRev is a part of the Class 6 Course Sample Papers For Class 6.
All you need of Class 6 at this link: Class 6

Q1. Records of the past are arranged in which order? [1 mark]

Correct answer is Option (b).

Explanation: History is a record of people, places and events of the past arranged in chronological order. Chronology is the arrangement of events or dates in the order of their occurrence. 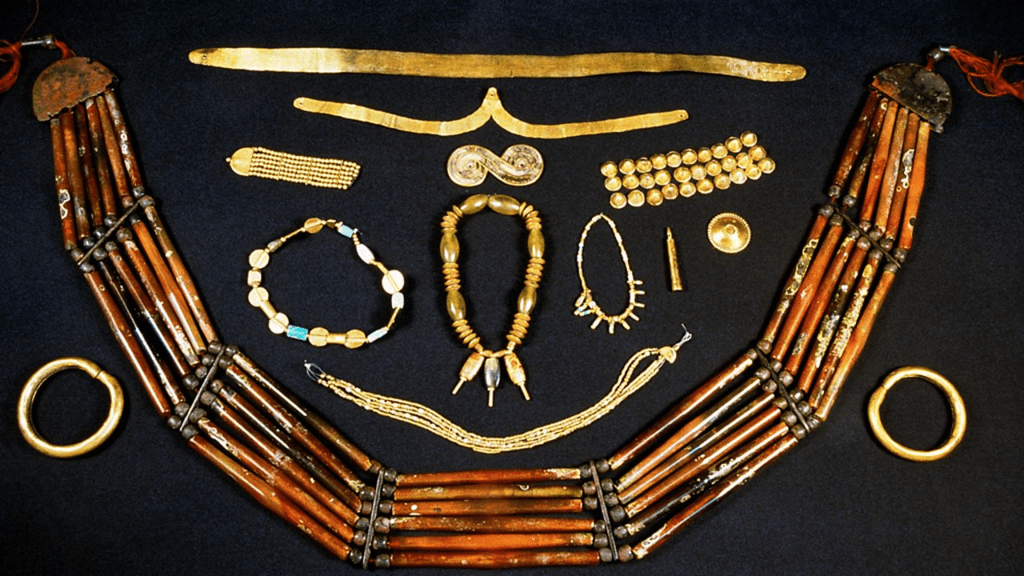 Artifacts From the Past

Q2. When did humans first appear on Earth? [1 mark]

Explanation: Homo sapiens emerged around 300,000 years ago, evolving from Homo erectus and migrating out of Africa, gradually replacing local populations of archaic humans. Early humans were hunter-gatherers, before settling in the Fertile Crescent and other parts of the Old World.

Explanation: Rice is sown at the beginning of the rainy season. Rice is a Kharif crop. These crops are also referred to as monsoon crops. Hot weather and huge quantity of water is the main requirement for such crops. Rice plants need to maintain the perfect temperature, humidity which is present generally in summer otherwise they won't be able to survive.

Wheat needs less water, excessive water causes root infection in wheat and some other rabi crops. That's why they are planted in the winter season.

Q4. How many years back were the Harappan cities developed? [1 mark]

Explanation: The Harappan Civilization developed around 4700 years ago. The earliest city to be developed in India was Harappa in Punjab, in present day Pakistan. Further down the Indus valley, another city was excavated and this was Mohenjo-Daro in Sind.

Q5. In which age did humans begin farming? [1 mark]

Explanation: The beginning of farming and herding occurred during the Mesolithic Period i.e. roughly from about 12000 years ago. There were changes in climatic conditions. There was adequate rainfall with better tools and harmonized climate conditions for farming. People no longer depended on hunting, fishing, and gathering. Agriculture and animal husbandry took care of their food.

The Vedic Age is also known as the age of the epics, as the two famous epics, Ramayana and Mahabharata were composed during this time.

Q7. Who were the untouchables and what kinds of jobs did they do? [2 marks]

Untouchables included some crafts persons, hunters and gatherers as well as people who helped perform burials and cremations. It was believed as per the priest's saying that contact with these groups was polluting.

History can be defined as the study of our past. It is the story of the people who lived in the past. The events which happened in the past, ten or thousand years ago, are part of our history.

Q9. Which plants were cultivated during the Neolithic period? [2 marks]

The plants cultivated during the Neolithic period were wheat, barley, figs, oats and tall grasses.

Q10. What sets of unique objects were found in the cities of the Indus valley civilisation? [2 marks]

Unique objects found in almost all the cities of the Indus Valley civilisation are listed below:

The four reasons why hunter-gatherers move from place to place are as follows:

Q1. Ladakh is situated in the eastern part of which state? [1 mark]

Explanation: Ladakh, a large area of the northern and eastern Kashmir region, the northwestern Indian subcontinent. Administratively, Ladakh is divided between Pakistan (northwest), as part of Gilgit-Baltistan, and India (southeast), as part of Ladakh union territory. Q2. The traveller who wrote about the lives of Muslims in Kerala is one of the writers listed below: [1 mark]

Explanation: The Moroccan traveller Ibn Battutah (14th century) has recorded the considerably huge presence of Muslim merchants and settlements of sojourning traders in most of the ports of Kerala. Q3. How many major religions are there in the world? [1 mark]

Explanation: There are 8 major religions in the world and every single one of them is practised in India.

Q4. The term used for disabled children is one of the terms listed below: [1 mark]

d) All of the above

Explanation: The other term used for disabled children is children with special needs.

a) Rule by a king or queen

b) Chosen by the people

c) None of them

Explanation: Monarchy is a form of government in which the monarch (king or queen) has the power to make decisions and run the government. The monarch may have a small group of people to discuss matters with, but the final decision-making power remains with the monarch.

Diversity is understanding that each individual is unique and includes recognising our individual differences. The differences can be in race, ethnicity, gender, sexual orientation, socio-economic status, age, physical abilities, religious beliefs, political beliefs or other ideologies.

Q7. After which massacre was the song ‘Don’t forget the days of blood, O friend’ composed? [2 marks]

The song was composed and sung after the Jallianwala Bagh massacre. It was sung in the memory of brave Indian people who lost their lives protesting against the British.

Prejudice means judging other people negatively or considering them to be inferior.Example: When we think that only one particular way is the best and right way to do things, we often end up not respecting others who prefer to do the same things differently.

Q9. What are the various levels at which the government works? [2 marks]

The government works at the following three levels:

Gram Panchayat is formed in the following manner:

Q12. How does the government in India promote justice? [5 marks]

Q1. The major physical divisions of India includes one of the following options: [1 mark]

d) All of the above

Explanation: The physical features of India can be grouped under the following physiographic divisions:

a) Brahmaputra and Kaveri

b) Krishna and Godavari

Explanation: The two prominent rivers which drain into the Arabian Sea are Narmada and Tapi.

The Narmada River is known as the "Life Line of Madhya Pradesh and Gujarat". This is because it has played a huge role for these states in several ways. Narmada arises from Amarkantak Plateau in Madhya Pradesh.

The Tapti River flows through central India between the Godavari and Narmada rivers. It flows westwards before draining into the Arabian Sea. The river has its origin in the eastern Satpura Range of southern part of Madhya Pradesh.

Q3. At which position do the Earth experience equal days and equal nights? [1 mark]

Correct answer is Option (b).

Explanation: On 21st March and September 23rd, direct rays of the sun fall on the equator. At this position, neither of the poles is tilted towards the sun; so, the whole earth experiences equal days and equal nights. This is called an equinox.

Explanation: There are eleven time zones in Russia, which currently observe times ranging from UTC+02:00 to UTC+12:00.

Q5. Which of the following is the natural habitat of the Indian lion? [1 mark]

Explanation: Gir Forest National Park and Wildlife Sanctuary is a forest found in Gujarat and it is the sole home for the Indian Lion.

The Great Indian Desert lies in the western part of India in Rajasthan. It is a dry, hot and sandy stretch of land. It has very little vegetation.

Q7. What would happen if the Earth did not rotate? [2 marks]

If the Earth did not rotate, the portion of the Earth facing the Sun would always experience day and would be hot continuously. The other half would remain in darkness and be freezing cold. Life would not be possible in such extreme conditions.

Q8. What are the special features of a globe? [2 marks]

A globe is a true model (miniature form) of the Earth. It may be small or big in size. It shows countries, continents and oceans in their correct size. In addition, it is not fixed but can be rotated.

Q9. Define climate? What type of climate does India have? [2 marks]

The average weather condition of a place measured over many years is called the climate. India has a monsoon type of climate.

Birds that move from one country to another country in winters are called migratory birds. Examples include Siberian Crane, Stork, Pintail Duck and Curlew.

Q12. Why does the amount of heat reduce as we go from the Equator to the North Pole or the South Pole? [5 marks]