Q.1. India’s bauxite deposits are mainly found in which of the following regions?    (1 Mark)(a) Maikal hills region (b) Bilaspur-Katni belt (c) Amarkantak plateau (d) All of these Ans. (d) All of these 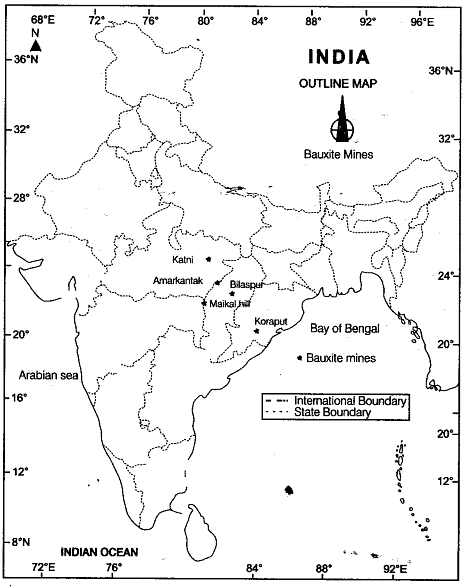 Bauxite Deposits in IndiaQ.2. Which of the following Acts did not permit plantation workers to leave the tea garden without permission?    (1 Mark)(a) Indian Independence Act (b) Inland Emigration Act of 1859 (c) Impaired Legislature Council Act (d) Inland Immigration ActAns. (b) Inland Emigration Act of 1859Q.3. Which of the following minerals is a metallic mineral?    (1 Mark)(a) Copper (b) Mica (c) Salt (d) Coal Ans. (a) CopperQ.4. _________ was a pioneer of mass production.    (1 Mark)(a) Henry Ford(b) Abraham Lincoln(c) Hitler(d) GutenbergORWho, among the following, improved the steam engine produced by Newcomen? (a) Mathew Boulton (b) James Watt (c) Henry Ford (d ) Grahm BelAns. (a) Or (b)Q.5. Why do political parties create social division?    (1 Mark)Ans. Democracy involves competition, which tends to divide any society. Due to competition, political parties create social division.Q.6. Complete the following table with correct information with regard to the cultivation of maize:    (1 Mark)

Q.8. Resources which are surveyed and their quantity and quality have been determined for utilisation are known as________.    (1 Mark)Ans. Developed ResourcesQ.9. Study the picture and answer the question that follows    (1 Mark) 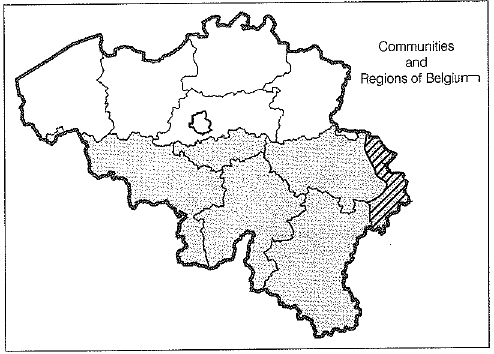 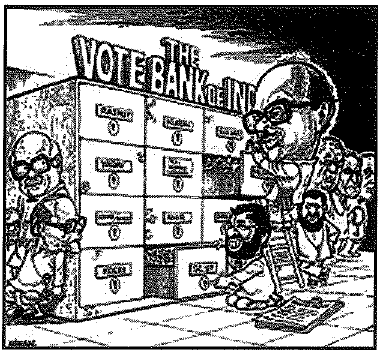 Q.13. Complete the following table with correct information with regard to sectors of economy.    (1 Mark)

What were the causes for strained relations between the Sinhala and Tamil communities in Sri Lanka?

The causes of the ethnic conflict in Belgium were as follows:

(iii) There was a great social disparity between Dutch and French-speaking communities during the lybus and 1960s.

Q.22. Mention any three effects of the British Governments decision for the abolition of the Corn Laws.    (3 Mark)ORWhat is meant by proto - industrialisation? Why was it successful in the countryside in England in the 17th century?Ans.

Proto-industrialisation was the early phase of industrialization in Europe and England when there was large scale industrial production for an international market. This was not based on factories.It was successful in the countryside in England due to the following reasons:(i) The peasants had been shut out of village commons due to enclosure movement.(ii) They now looked for the alternative source of income.

(i) Identification and inventory of resources across the regions of the country. This involves surveying mapping and qualitative and quantitative estimation and measurement of the resources.(ii) Evolving a planning structure endowed with appropriate technology, skill and institutional setup.(iii) Matching the resource development plans with overall natural development plans.

Q.24. “Tourism industry played an important role in the economic and cultural development of India.” Support the statement with examples.    (3 Mark)Ans.

Following documents are required by bank for giving a house loan:(i) Employment record of the borrower.(ii) Ownership/purchase documents of the new home.(iii) Salary slip of the borrower.Q.26. "The Government of India gives holidays for the festivals of most of the religions." Why is it so? Give your viewpoint.    (3 Mark)Ans.It is so because:

Q.27. How do we include various goods and services for calculating Gross Domestic Product (GDP) of a country?    (3 Mark)Ans.

Q.28. How is it possible to create more employment in rural areas? Explain with examples.

ORHow does public sector contribute to the economic development of the nation? Explain.    (3 Mark)Ans.

(i) Diversification of Agriculture

(i) Development of Infrastructure: The pace of industrial development cannot be accelerated without infrastructure establishment. Its development requires huge capital investment, which cannot be mobilised by the private sector. Moreover, these projects do not promise high profits.(ii) Development of Backward Areas: The goal of achieving a reduction in economic inequality between regions becomes easy to reach if industries are set up in backward areas. But the profit-seeking private industrialists often are not enthusiastic enough, to set up industry in the backward regions. The government, therefore, finds it necessary to start industrial production in these areas on its own.(iii) Basic Facilities

Q.29. Describe the cause of the Silesian Weavers uprising. Comment on the viewpoint of the journalist.    (5 Mark)Ans.

Q.30. Read the extract and answer the questions that follows:

The distribution pattern of the Railway network in the country has been largely influenced by physiographic, economic and administrative factors. The northern plains with their vast level land, high population density and rich agricultural resources provided the most favourable condition for their growth. However, a large number of rivers requiring construction of bridges across their wide beds posed some obstacles. In the hilly terrains of the peninsular region, railway tracts are laid through low hills, gaps or tunnels. The Himalayan mountainous regions too are unfavourable for the construction of railway lines due to high relief, sparse population and lack of economic opportunities. Likewise, it was difficult to lay railway lines on the sandy plain of western Rajasthan, swamps of Gujarat, forested tracks of Madhya Pradesh, Chhattisgarh, Odisha and Jharkhand. The contiguous stretch of Sahyadri could be crossed only through gaps or passes (Ghats). In recent times, the development of the Konkan railway along the west coast has facilitated the movement of passengers and goods in this most important economic region of India. It has also faced a number of problems such as sinking of track in some stretches and landslides.(a) Which is the most convenient mode of transportation in India? (b) Analyse the physiographic factors that have influenced the distribution pattern of the railways in our country. (c) Which economic factors have largely influenced the distribution pattern of the railways in India?    (5 Mark)Ans.(a) Rail transport is the most convenient mode of transportation in India.(b) Physiographic Factors 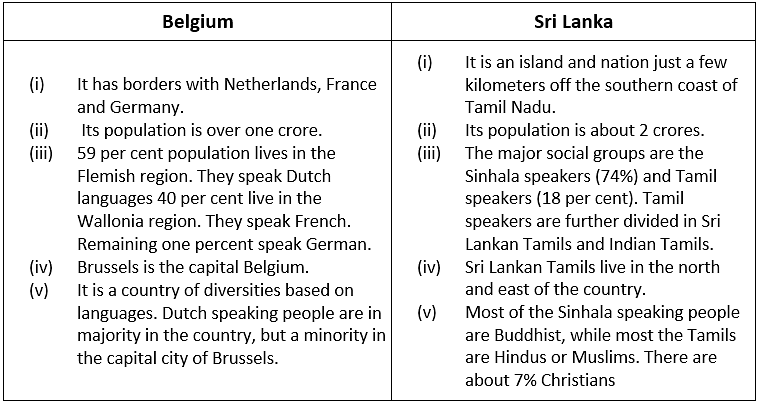 (i) Since most political parties do not practice open and transparent procedures for their functioning, there are very few ways for an ordinary worker to rise to the top in a party.(ii) Those, who happen to be the leaders, are in a position of unfair advantage to favour people close to them or even their family members. In many parties, the top positions are always controlled by members of one family. This is unfair to other members of that party.(iii) Dynastic succession does not allow the grass-root level workers to reach the top.Example: If one looks at the database of all the MPs in the Parliament, one can find that less than 50% of the MPs come into politics from the grass root levels, while most of the women MPs entered the politics through family connections.(iv) Dynastic succession is the major factor responsible for lack of internal democracy in a political party. Due to lack of internal democracy, some leaders assume greater power to make decisions in the name of the party.(v) Due to dynastic succession, many parties are unable to hold regular elections for the top leader.Q.33. Read the extract and answer the questions that follows:    (5 Mark)Manufacturing industries not only help in modernising agriculture, which forms the backbone of our economy, they also reduce the heavy dependence of people on agricultural income by providing them jobs in secondary and tertiary sectors.Industrial development is a precondition for eradication of unemployment and poverty from our country. This was the main philosophy behind pubic sector industries and joint sector ventures in India. It was also aimed at bringing down regional disparities by establishing industries in tribal and backward areas.Export of manufactured goods expands trade and commerce and brings in much needed foreign exchange.

(b) The industrial development is considered important for tribal and backward areas due to the following reasons:

Q.34. How far it to correct to say that money in your pocket cannot buy the basic needs to live well?    (5 Mark)Ans.

Q.35. (a) On the given political map of India, mark and locate the following:    (2 Mark)(i) A place associated with salt law violation by Gandhiji. (ii) The place where the Indian National Congress Session in 1927 took place.

(b) On the same outline map of India identify any four of the following features and write their names on the marked lines: (Choose any four features)    (4 Mark)(i) A thermal power plant (ii) A major oil field (iii) Cotton textile industry (iv) Adam (v) Major rice-producing state.(vi) An international airport. 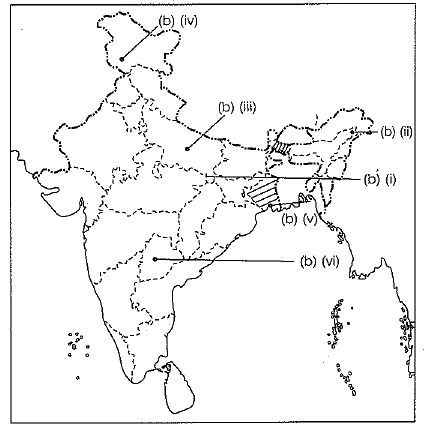 Ans:The answer map is given below : 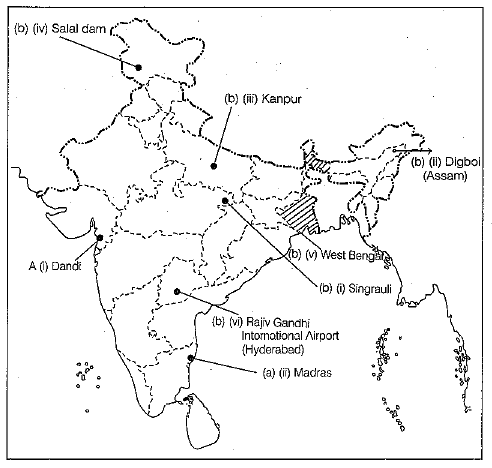