Q.1. “The first clear expression of nationalism came with the French Revolution in 1789”. Justify by giving a reason.    (1 Mark) Ans: The political and constitutional changes that came in the wake of the French Revolution led to the transfer of sovereignty from the monarchy to a body of French citizens.Q.2. Which of the following activities is not an activity of tertiary sector.    (1 Mark) (a) Transport(b) Storage(c) Banking(d) FishingAns: (d)Q.3. Who is represented as a postman in the given image?    (1 Mark) (a) Giuseppe Mazzini(b) Napoleon Bonaparte(c) Otto von Bismarck(d) Giuseppe GaribaldiAns: (b)Q.4.Which one of the following organisations brought World Development Report?    (1 Mark) (a) World Economic Forum(b) World Bank(c) IMF(d) Asian Development BankAns: (b)Q.5.  The Bctton Woods conference established ............. to deal with external surpluses and deficits of its member nations.    (1 Mark) (a) IMF(b) World Bank(c) UNO(d) UNICEFOrHand Labour was preferred over machines in Victorian England because : _____(a) there w as less space for in stalling machines.(b) Women labourers were not trained to operate machines.(c) manual labour was cheaper than machines(d) the queen had banned the use of machines in factories to create job opportunities for the poor.Ans: (a) Or (c)Q.6. Which of the following institution is not a Panchayati Raj institution ?    (1 Mark) (a) Gram Sabha(b) Gram Panchayat(c) Panchayat Samiti(d) Municipal CorporationAns: (d)Q.7. Complete the following table with correct information with regard to cultivation of wheat:    (1 Mark)

Ans: (A) 50-75 cm (B) RabiQ.8. Name the first weekly Bengali Newspaper.    (1 Mark) Ans: Bengal Gazette was first weekly Bengali NewspaperQ.9. Consider the following two statements on power sharing mid select the answer using the codes given below :    (1 Mark) (A) Power sharing is good for democracy.(B) It helps to reduce the possibility of conflict between social groups.Which of these statements are true and false ?(a) A is true but B is false(b) Both A and B are true(c) Both A and B are false(d) A is false but B is trueOrMatch List I (forms of power sharing) withList II (forms of government) and select the correct answer using the codes given below the lists

Ans: (A) = Kharif crop(B) 21° C to 27° CQ.13.  What is Equals wages Act?    (1 Mark) Ans: Equal wages should be paid to all for equal work.Q.14. Tourist guide comes in the________sector.    (1 Mark) Ans: OrganisedQ. 15. Which of the following is not a criterion for comparing development of different countries ?    (1 Mark) (a) Educational level of the people(b) People's material possessions(c) Their health status(d) Their per capita incomeAns: (b)Q.16. Find the incorrect option.    (1 Mark) (a) Primary sector is directly associated with nature.(b) Primary sector includes the production of raw material and basic foods.(c) Activities associated with primary sector include agriculture, mining, banking, transport and so on.(d) Primary activities/sector support (s) the secondary sector of economy.Ans: (c) Activities associated with primary sector include agriculture, mining, banking, transport and so on.Q.17.  Define GDP.    (1 Mark) Ans: It is the sum of production in all the three sectors of the economy during a particular yearQ.18. Where does Durg-Bastar-Chandrapur major iron belt lie ?    (1 Mark) Ans: Durg-Bastar-chandrapur belt lies in Chhatisgarh and Maharashtra.Q.19. In the question given below, there are two statements marked as    (1 Mark) Assertion (A) and Reason (R). Read the statements and choose the correct option:Assertion (A) : Banks keeps a small proportion of their deposits as cash with themselves.Reason (R) : This is kept to meet the loan requirements of the people.Options:(a) Both (A) and (R) are true and (R) is the correct explanation of (A).(b) Both (A) and (R) are true but (R) is not the correct explanation of (A).(c) (A) is correct but (R) is wrong.(d) (A) is wrong but (R) is correct.Ans: (c).Q.20. ......... are the primary road systems and are constructed and maintained by the Central Public Works Department (CPWD) under NHAI's supervision.    (1 Mark) Ans: National Highways.

Q.35. (a) Two places A and B have been marked on the given outline map of India. Identify them and write their correct names on the lines drawn near them.(A) The place where Indian National Congress Session was held in December 1920.    (2 Mark)(B) A place where Gandhiji  organised ‘Satyagraha’ in favour of cotton mill workers.    (4 Mark)(b) On the same outline map of India locate and label any four of the following with suitable Symbols.(i) Bokaro - Coal Mine(ii) Kudremukh - Iron or Mine(iii) Salem - Iron and Steel Plant(iv) Namrup Thermal Power Plant(v) Kandla - Major Sea Port(vi) Chennai AirportAns: 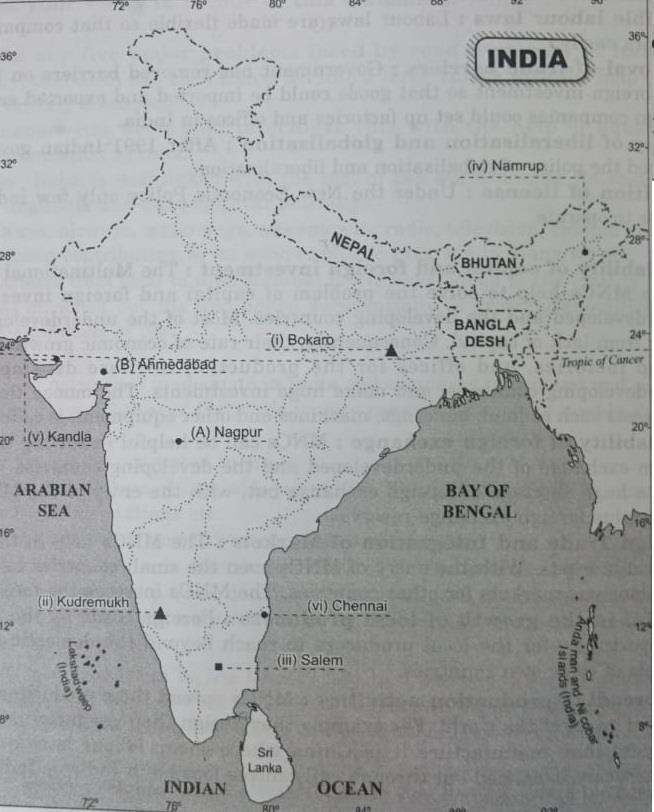