Q.1. In which of the following constitutional list subjects of national importance such as defence are included?    (1 Mark)(a) Residuary Subjects(b) Union List(c) State List(d) Concurrent ListAns: (b) Union ListQ.2.  Why were the Dalits ignored by the Congress for a long time?    (1 Mark)(a) Fear of offending the sanatanis (b) Fear from Dr. B.R. Ambedkar (c) Fear from socialism (d) Fear from industrialistsAns:  (a) Fear of offending the sanatanisQ.3. Which of the following is a formal lender ?    (1 Mark)(a) Moneylender (b) Trader (c) Friends (d) BankAns: (d) BankQ.4.  Arrange the following in correct sequence.    (1 Mark)(i) Salt March (ii) Simon Commission (iii) Champaran Satyagraha (iv) Rowlat Act  Option: A. (i), (iii), (ii), (iv) B. (iii), (iv), (ii), (i) C. (ii), (i), (iv), (iii) D. (iv), (ii), (i), (iii) Ans: B. (iii), (iv), (ii), (i)Q.5. Who discovered America?    (1 Mark)Or Where was 'Chutney Music' popular?Ans: Christopher Columbus discovered the vast continent America.Or ‘Chutney Music’ was popular in Trinidad and Guyana.Q.6. Give an example of non-renewable resources.    (1 Mark)ORWhich cold desert is relatively isolated from the rest of the country ?Ans:  Coal Minerals.OR LadakhQ.7. Which of the following states has the Lowest Infant Mortality Rate in India ?    (1 Mark)(a) Punjab(b) Haryana(c) Bihar(d) KeralaAns: (d) KeralaQ.8.  Identify the ore with which the following ore mines are associated with :    (1 Mark)(a) Balaghat mines (b) Kudremukh mines Ans: (a) Balaghat mines - Copper(b) Kudermukh mines - Iron orQ.9. Study the picture and answer the question that follows :    (1 Mark) 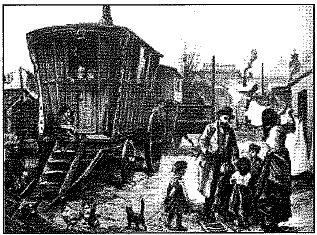 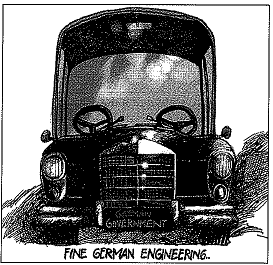 Which of the following option best signifies this cartoon ?    (1 Mark)(a) Problems of two party system(b) A car with two steering(c) Problems of a coalition government(d) None of the aboveAns:  (c) Problems of the coalition governmentQ.11. After the introduction of refrigerated ships, animals were slaughtered for food at the starting point an d them transported as ________ .    (1 Mark)Ans. frozen meatQ.12. The Constitution of India has given Hindi language, the status of_______.    (1 Mark)Ans: Official languageQ.13. Study the picture and answer the question that follows :    (1 Mark) 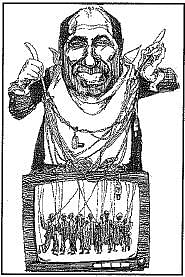 Q.21. Which sector is called public sector? Give some examples.    (3 Mark)Or What do you understand by organised sector? Also give its example.Ans: The public sector refers to the part of the economy concerned with providing various government services. The composition of the public sector varies from country to country. In most countries, the public sector includes services like military, police, public transit and care of public roads, public education, healthcare etc. The public sector might provide services that a non-tax payer cannot be excluded from (such as street lighting) services. This sector benefits all of society rather than just the individual who uses the service.OrThe organised sector covers those enterprises or places of work where the terms of employment are regular and people have, assured work. It is called organised because it has some formal processes and procedures. In organised sector, workers work for a fixed number of hours everyday. They get a weekly off day. In case of extra time for doing work is required, they are paid for it at double the normal rate. For e.g., a worker in a large factory, a clerk in a office, a doctor in a hospital etc.Q. 22. Why was the Napoleonic rule over other regions unpopular with some sections of Europe?    (3 Mark)ORDescribe the ideology of liberalism during early 19th century.Ans:  Reasons of unpopularity of Napoleonic rule over other regions were :(i) Administrative reforms did not go hand-in-hand with the political freedom. The newly annexed regions found themselves under the French rule..(ii) The newly acquired territories had to face increased taxation and censorship.(iii) The forced conscription into French army to conquer other parts of Europe was not popular with the new ly conquered peopleORThe Ideology of Liberalism during early 19th century:(i) Liberalism in the early 19th century stood for freedom for the individual and equality to all before law for the new middle classes.(ii) Politically, it emphasised the concept of government by consent.(iii) It stood for the end of autocracy and clerical privileges.Q.23. Which are the ideal conditions under which minerals may be mined ?    (3 Mark)Ans. The ideal conditions for mining of minerals are as given below :(1) The mineral content of the ore must be in sufficient concentration to make its extraction commercially viable.(ii) The type of formation determines the relative ease with which mineral ores may be mined.(iii) This also determines the cost of extraction.Q.24. Distinguish between the Coming Together Federations and,the Holding Together Federations.    (3 Mark)Ans:

Q.25. How credit has its own unique role for development? State any three reasons.    (3 Mark)Or Why the demand deposits are considered as money?Ans: A major part of deposits is used as credit. Credit is an agreement in which the lender supplies the borrower with money, goods and services in return for the promise of future payment.Credit has its own unique role for development because of the following reasons :(i) Cheap and affordable credit leads to higher income and many people could then borrow cheaply for a variety of needs.(ii) Farmers can buy agricultural inputs with credit or setup small scale and cottage industries.(iii) People could setup new industries or trade as well. All these activities lead to development of the country.OrDue to following reasons the demand deposits are considered as money :(i) Demand deposits can be withdrawn from the bank whenever it is required.(ii) They are widely accepted as a means of payment, along with the currency, thus they are considered as money.(iii) They are accepted widely as means of payment by way of a cheque instead of cash.Q.26. How is Democracy a better form of government when compared with dictatorship or any other alternative government?    (3 Mark)Ans: Democracy is a better form of government when compared with dictatorship or any other alternative form of government because it:(i) Promotes equality among citizens.(ii) Enhances the dignity of the individual.(iii) Improves the quality of decision making.(iv) Provides a method to resolve conflicts.(v) Allows room to correct mistakes.Q.27. Describe any three functions of World Tirade Organisation.    (3 Mark)Ans: (i) With the liberalisation of foreign trade and investment, it is necessary to have an international organisation to supervise the trade between countries.(ii) It sees that all the countries in the world liberalise their policies.(iii) It allows free trade for all i.e., in developing and developed countries.(iv) It implements the rules for trade in all the countries.(v) WTO looks after to make globalisation more fair to create opportunities for all.Q.28. "Credit is Useful as well Us harmful, it depends oh the risk involved.” Support the statement with examples. ;    (3 Mark)OrWhy should the banks and cooperative societies provide more loan fabilities to the rural households in India ? Give four reasons.Ans. (i) Credit is a working capital which is required for production. The credit helps the farmers to meet the ongoing expenses of production, complete production on time, and thereby increase his earnings. Credit therefore plays a vital and positive role in, this situation.(ii) The failure of crop may push the borrower into a situation from which recovery is very painful. InTmany cases farmers need to sell part of land to repay -the loan.(iii) Whether the credit would be useful or not depends on the risks in the situation and whether there is some support in case of loss.Or(i) Most of the farmers are very poor, they do not have any surplus money.(ii) Moneylenders charge very high rate of interest. This leads to increasing debt and debt trap.(iii) Moneylenders use unfair means to get their money back.

Q.34.  Explain why service sector is gaining more importance in the global economy.    (5 Mark)Ans:  Tertiary sector in India has been growing rapidly for a number of reasons:(i) In a developing country, the government has to take responsibility for the provision of basic services. For example, hospitals, educational institutions, post and telegraph services, police stations, courts, village administrative offices municipal corporations, defrence, transport, banks, insurance companies, etc.(ii) The development of agriculture and industry led to the development of services such as trade, transport, storage, etc. Greater the development of the primary and secondary sectors, more would be the demand for such services.(iii) As income levels rise, certain sections of people start demanding many more services, such as eating out, tourism, shopping malls, private hospitals, private schools, professional training, etc. This change is quite sharp in cities, especially in big cities.(iv) Over the past decade or so, certain new services, such as those based on information and communication technology have become important and essential.(v) Government policy of privatisation has also led to the growth of this sector.

Q.35. (a) On the given political outline map of India, mark and locate the following :    (2 Mark)(i) A place where Cotton Mill workers organised Satyagraha, (ii) An incident took place here due to which the Non-cooperation Movement was called off. (b) On the same outline map of India identify any four of the following with suitable symbols.    (4 Mark)(i) An international airport. (ii) An iron and steel plant. (iii) A software technology park in Jammu and Kashmir. (iv) An iron ore mine. (v) A major sugarcane producing state. (vi) A dam on Narmada river. 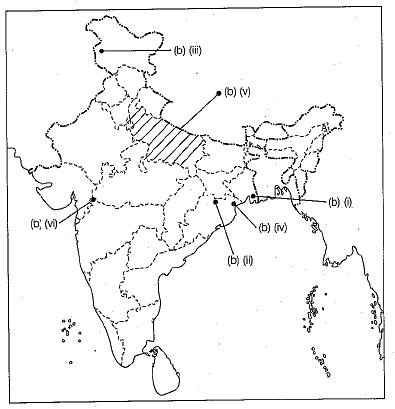 Ans: The answer map is given below ; 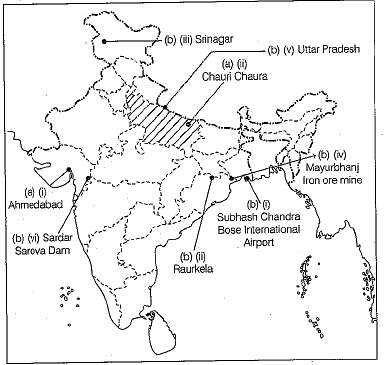