Q.1. Association of producers who controlled production and trade of goods in Europe during 17th century were known as ________ .    (1 Mark)OrRin derpest was a fast spreading cattle disease that had an impact on the life and economy of the people of ________ .Ans:  Trade GuildsOrAfricaQ.2. What is a mineral ?    (1 Mark)Ans: Mineral is a “homogeneous” naturally occurring substance with a definable internal structure.Q.3. When did Jallianwala Bagh incident take place?    (1 Mark)(a) 13th April 1919(b) 19th April 1920(c) 18th April 1919(d) 15th March 1920Ans:  (a) 13th April 1919Q.4. In Belgium, how were the tensions between the linguistic communities controlled?    (1 Mark)(a) By an agreement made between the majority and minority groups.(b) By accepting a federal style of government.(c) By making amendments to the Constitution of Belgium.(d) By the minority group accepting the dominance of the majority groups.Ans: (c) By making amendments to the Constitution of BelgiumQ.5. Match the column:    (1 Mark) 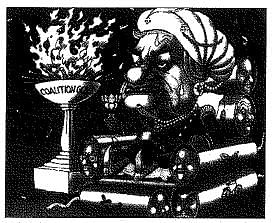 Which of the following leader is shown in this cartoon?    (1 Mark) (a) Rajiv Gandhi (b) I. K. Gujaral (c) H. D. Deve Gowda (d) A. B. VajpayeeAns: (d) A.B. VajpayeeQ.12. Correct the following statement and rewrite :    (1 Mark)In 1916, Gandhiji travelled to Dandi in Bihar to inspire the peasants to struggle against oppressive Zamindars.Or A Khilafat Committee was formed under the leadership of Maulana Abul Kalam Azad, Mohammad Ali Jinnah and Hasrat Mohani.Ans: In 1916, Gandhiji travelled to Champaran in Bihar to inspire the peasant to struggle against oppressive indigo planters.OrA Khilafat Committee was formed under the leadership of Maulana Azad, Hakim Ajmal Khan and Hasrat Mohani.Q.13. Apart from the Central and the State governments, which is the third type of government practised in Belgium ?    (1 Mark)(a) Local government(b) Municipal government(c)  Community government(d)  Ethnic government Ans: (c)Q.14. _______ means when exports are more than imports.    (1 Mark)Ans: Favourable balance of tradeQ.15. Which of the following does not constitute a part of informal credit in India ?    (1 Mark)(a) Commercial Bank (b) Moneylenders (c) Friends and relatives (d) ZamindarsAns: (a) Commercial BankQ.16. Match the following items given in Column I with those in Column II.    (1 Mark) 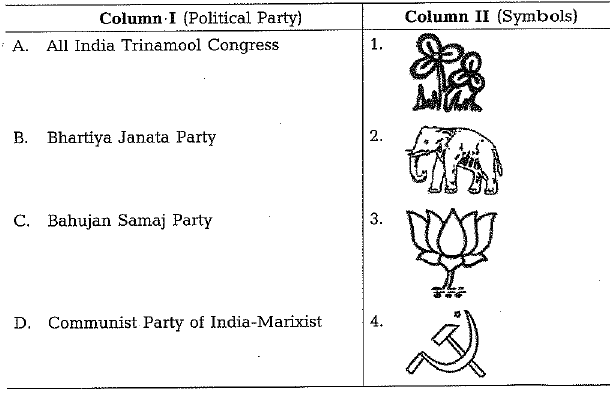 Q.21. What were the factors which were responsible for the end of the Bretton Woods system ?    (3 Mark) Or“The modern industrialisation could not marginalise the traditional industries in England.” Justify the statement with any four suitable arguments.Ans: (i) The Decline of US Currency : After 1960s, the US was no longer the dominant economic power as it had been for more than two decades. The US dollar now no longer commanded confidence as the world’s principal currency. The dollar could not maintain its value in relation to gold.(ii) New powers : By the mid-1960s, the E.E.C, and Japan had become international economic powers in their own right.(iii) Rise of Western Commercial Banks : From the mid 1970’s most of the developing nation were being forced to borrow from Western Commercial Banks instead of international financial institutions. This led to periodic debt crises in the developing world and lower income along with increased poverty, especially in Africa and Latin America.Or(i) Expensive new technology : New technologies and machines were expensive, so. the producers and the industrialists were cautious about using them.(ii) Costlier repair : The machines often broke down and the repair was costly.(iii) Less effective : The newly invented machines were not as effective as their inventors and manufacturers claimed.Q.22. Describe the main features of plantation agriculture.    (3 Mark) Ans: (i) It is a single crop farming because a single crop is grown on a large area.(ii) It is a capital intensive agriculture.(iii) The produce is used as raw material in respective industries.(iv) It needs good managerial ability, technical know-how, sophisticated machinery, fertilisers, irrigation, transport facilities and communication network.(v) Tea, coffee, rubber, sugarcane, banana are important plantation crops.(vi) Some plantations like tea, coffee and rubber have a processing factory within farm itself or close to it.Q.23. Read the sources given below and answer the questions that follows:    (3 Mark) Source- A The RevolutionariesDuring the years following 1815, the fear of repression drove many liberal-nationalists underground. Secret societies sprang up in many European states to train revolutionaries and spread their ideas. To be revolutionary at this time meant a commitment to opposed monarchical forms that had been established after the Vienna Congress, and to fight for liberty and freedom. Most of these revolutionaries also saw the creation of nation-states as a necessary part of this struggle for freedom.Source- B Italy UnifiedLike Germany, Italy too had a long history of political fragmentation. Italians were scattered over several dynastic states as well as the multi-national Habsburg Empire. During the middle of the nineteenth century, Italy was divided into seven states, of which only one, Sardinia-Piedmont, was ruled by an Italian princely house. The north was under Austrian Habsburgs, the centre was ruled by the Pope and the southern regions were under the domination of the Bourbon kings of Spain. Even the Italian language had not acquired one common form and still had many regional and local variations.Source- C Visualising the NationWhile it is easy enough to represent a ruler through a portrait or a statue, how does one go about giving a face to a nation? Artists in the eighteenth and nineteenth centuries found a way out by personifying a nation. In other words they represented a country as if it were a person. Nations were then portrayed as female figures. The female form that was chosen to personify the nation did not stand for any particular woman in real life; rather it sought to give the abstract idea of the nation a concrete form. That is, the female figure became an allegory of the nation.Source- A The Revolutionaries(1) Why were the different secret societies founded in Europe during the years following 1815 ? Source- B Italy Unified(2) Which part of Italy was ruled by an Italian Princely house?Source- C Visualising the NationWhat is an allegorv ?Ans:  (1) Source-A The Revolutionaries During the years after 1815, different secret societies were founded to train revolutionaries and spread their ideas.(2) Source-B Italy Unified Sardinia - Piedmont was ruled by an Italian princely house.(3) Source-C Visualising the Nation When an abstract idea is expressed through a female figure, specially for a nation is called an allegory.Q.24. What is the role of an opposition party in a democracy?    (3 Mark) Or What efforts have been made to reform political parties in India?Ans: An opposition party plays a very important role in a democracy as :(i) It acts as pressure group and mobilises the government into action if the government does not take action on a serious issue.(ii) It keeps a check on the working of the ruling party so that the ruling party functionaries take their duties seriously.(iii)  It gives its own views in Parliament and criticises the government for its failure or wrong policies.OrThe following efforts have been made to reform political parties in India :(i) The Supreme Court has passed an order to reduce the influence of money and criminal activities on political parties.(ii) The Constitution was amended to prevent MLAs and MPs from changing parties after elections.(iii) The Election Commission has passed an order making it necessary for political parties to hold their organisational elections and file their income tax returns regularly.Q.25. Distinguish between a regional and a national party.    (3 Mark) OrDistinguish between a political party and a pressure group.Ans:

In both the cases in the table, average income in both countries is Rs. 10,000. However, if a choice is given, a person will like to live in country A because in this country people are neither very rich nor extremely poor.On the other hand, most citizens in country B are poor and one person is extremely rich. Hence, while average income is useful for comparison, it hides disparities and does not show how the income is distributed.OrThree differences between the intermediate and final goods are as mentioned below :

Q.27. Explain the role of education and health in the overall development of a country.    (3 Mark) ORBesides income, what can be the other attributes to compare economic development?Ans: (i) Role of Education : It plays a vital role ih the overall development of a human being and society, therefore stress on imparting education has been given in our Constitution.(ii) Role of Health : The general health standard in India is quite low. This is quite inevitable as nearly one-fourth of the population lives below the poverty line.(iii) A community based programmes on healthcare and medical services in rural areas has been launched. As a result of these efforts, there has been a fall in the incidence of certain diseases like tuberculosis, leprosy and polio.ORIncome is not only the criterion but it is one of the important indicators of economic development.Some of the other attributes are:(i) Infant Mortality Rate : It is an indicator of the availability of doctors and medical facilities in the region as well as the awareness of the people living there in regard to diseases and their prevention. Low infant mortality rate indicates good medical facilities arid all-round development in the society. A high rate will be economic loss for the region as much effort is wasted, which could have been harnessed.(ii) Literacy Rate: This is an indicator of the number of schools and teachers available in a region and it also indicates whether the facilities are being used or not due to societal pressures. Low literacy rate exhibits backwardness and slow economic development.(iii) Life Expectancy: This is also an indicator of available health facilities. Low life expectancy will be a hindrance to economic development.Q.28. Why is there overwhelming support for the idea of democracy all over the world? Explain.    (3 Mark) Ans: There is overwhelming support for the idea of democracy all over the world because we generally think that democracy can address all socio-economic and political problems. However, our expectations from democracy are not always fulfilled. Sometimes it may work slowly, less efficiently, having a poor response or not working cleanly. But, in democracy, regular and free elections are held. Also, there is always scope for open public debate. The government is the people's own government as it has been elected by them. People wish to be ruled by the people they have elected. They also feel that this form of government is best for their country, thus, giving it overwhelming support. 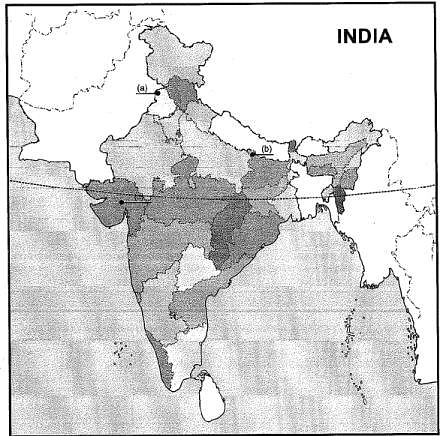