Q.4. Complete the following table with correct information with regard to alluvial soils:    (1 marks) 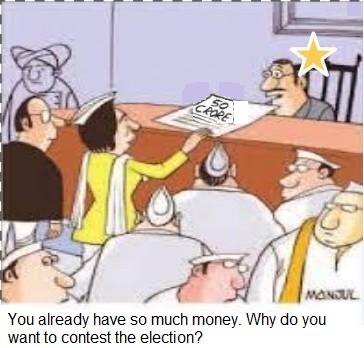 Q.11. Correct the following statement and rewrite:    (1 marks)Bahujan Samaj Party seeks to represent and secure power for dalits only.Ans: Bahujan Samaj Party seeks to represent and secure power for the dalits, adivasis, OBCs and religious minorities.ORBharatiya Janata Party supports socialism, secularism and democracy and opposes imperialism, and communalism.Ans: Communist Party of India - Marxist supports socialism, secularism and democracy and opposes imperialism and communalism.Q.12.
Question 7:Find the incorrect option:    (1 marks)
Q.13.
Question 8:In the question given below, there are two statements marked as Assertion (A) and Reason (R). Read the statements and choose the correct option:    (1 marks)
Assertion (A) : Periodically, banks have to submit information to the finance Minister on how much they are lending, to whom, at what interest rate, etc.
Reason (R) : The Finance Minister monitors the banks in actually maintaining cash balance.
Options :
Q.14. Different persons can have different ____________.    (1 marks)Ans: Developmental goalsORGroundwater is an example of __________________.Ans: Renewable resourcesQ.15.
Question 9:In recent years, the central and state governments in India are taking special steps to attract foreign companies to invest in India. Industrial zones are being set up. Companies who set up production units in these zones do not have to pay taxes for an initial period of five years.
Analyse the information given above, considering one of the following options correct:    (1 marks)
Q.16.
Question 10:At present, how many members are there in WTO?    (1 marks)

Q.17. “British rule in India would have collapsed if Indians had not cooperated”. How did this statement help in starting a mass movement in India against the British rule?    (3 marks)Ans: (i) Mahatma Gandhi declared that British rule was established in India with the cooperation of Indians and if Indians had refused to cooperate, British rule in India would have collapsed within a year.(ii) He proposed that the movement should unfold in stages.(iii) It should begin with the surrendering of titles that the government had awarded to the Indians.(iv) A boycott of civil services, army, police, courts and legislative assemblies, schools and foreign goods would show their non- cooperation to the British empire.Gandhiji felt that in case the government used repression, a full civil disobedience campaign would be launched.ORWhy did the Non- Cooperation Movement gradually slow down in the cities? Explain.Ans: The Non- Cooperation Movement gradually slowed down the cities because:(i) Khadi clothes were more expensive than mill clothes.(ii) Poor people could not afford to buy it.(iii) The boycott of British institutions posed a problem.(iv) Students and teachers began trickling back to government schools.(v) Lawyers joined back work in government courts.Q.18. How did the Balkan region become a source of nationalist tension in Europe after 1871?    (3 marks)Ans: (i) The Balkans was a region of geographical and ethnic variations comprising modern-day Romania, Bulgaria, Albania, Greece, Macedonia, Croatia, Bosnia-Herzegovina, Slovenia, Serbia and Montenegro.(ii) The inhabitants of these regions were known as Slavs.(iii) A large part of the Balkans was under the control of the Ottoman Empire.(iv) As the different Slavic nationalities struggled to define their identity and independence, the Balkan area became an area of intense conflict.(v) The Balkan states were fiercely jealous of each other and each hoped to gain more territory at the expense of others.Q.19. What is pipeline transportation? Write two merits and demerits of the same.    (3 marks)Ans: Pipeline transport network is the new mode of transport these days. In the past, pipelines were used to transport water to cities and industries. Now, these are used for transporting crude oil, petroleum products and natural gas from oil and natural gas fields to refineries, fertiliser factories and big thermal power plants. Solids can also be transported through a pipeline when converted into a slurry.Merits:(i) Useful in transporting liquids and solid slurry from faraway locations.(ii) Subsequent running costs after laying down the network are minimal.Demerits:(i) Initial cost of laying pipelines is high.(ii) Pipelines can burst or can have leakage leading to wastage of valuable resources like water, mineral oil, etc.Q.20. How is the ethnic composition of Belgium very complex? Explain.    (3 marks)Ans: (i) Of the country's total population, 59 per cent lives in the Flemish region and speaks Dutch language.(ii) Another 40 per cent people live in the Wallonia region and speak French.(iii) Remaining 1 per cent of the Belgians speak German.(iv) In the capital city Brussels, 80 per cent people speak French while 20 per cent are Dutch speaking.Q.21. Why is the `tertiary sector ’ becoming important in India? Explain any three points.    (3 marks)Ans: (i) Development of services such as transport, trade and storage promote agriculture and industry.(ii) Rise in income level.(iii) Development of information and communication technology.(iv) It provides larger number of employment.(v) Any other relevant point.Detailed Answer:Tertiary sector or the service sector composes almost 50% of India's population. The young generation studies hard, get good marks and then simply hunt for a good and secure job. The reasons why this sector is gaining importance can be summed up in following points :(i) The need for tertiary sector is increasing as there is more need of services like financial institutions, educational institutions, etc. in Indian economy.(ii) The tertiary sector accounts for most of the national and per capita income of India.(iii) The tertiary sector created huge employment even for the uneducated and unskilled workers.(iv) The tertiary sector is responsible to distribute its services and goods to different consumers.ORHow does public sector contribute to the economic development of the nation? Explain.Ans: Contribution of Public Sector to Economic Development:(i) In the public sector, the government owns most of the assets and provides all the services.(ii) The purpose of the public sector is not just to earn profits, but also to provide facilities to the public in different ways.(iii) There are several things needed by society as a whole, some of these need spending large sums of money which is beyond the capacity of the private sector and so they are provided by public sector.(iv) The government supports and encourages industrial activities providing affordable electricity. In the same way, to promote agricultural activities, government purchases their products on MSP and provide a subsidy for the poor on these products.(v) Any other relevant point.Q.22. Suggest any three ways to maintain Body Mass Index (BMI).    (3 marks)Ans: Three ways to maintain Body Mass Index are:(i) It is a measure of body fat based on height and weight that applies to adult men and women.(ii) A healthy BMI can be maintained by taking healthy and nutritional food.(iii) A person should exercise regularly for 60-90 minutes most days of the week.(iv) One should stay well hydrated by drinking at least 1.5-2 litters of water daily.

Q.23. Read the source given below and answer the following questions :    (4 marks)Like Germany, Italy too had a long history of political fragmentation. Italians were scattered over several dynastic states as well as the multi- national Habsburg Empire. During the middle of the nineteenth century, Italy was divided into seven states, of which only one, Sardinia-Piedmont, was ruled by an Italian princely house. The north was under Austrian Habsburgs, the centre was ruled by the Pope and the southern regions were under the domination of the Bourbon kings of Spain. Even the Italian language had not acquired one common form and still had many regional and local variations.Answer the following MCQs by choosing the most appropriate option.23.1

Question 12:Which of the following part of Italy was ruled by an Italian princely house?

Question 13:Who dominated the south regions of Italy?

Question 14:Besides Italy, which of the following nation had a long history of political fragmentation?
Q.24. Read the source given below and answer the following questions :    (4 marks)Tea cultivation is an example of plantation agriculture. It is also an important beverage crop introduced in India initially by the British. Today, most of the tea plantations are owned by Indians. The tea plant grows well in tropical and sub tropical climates endowed with deep and fertile well-drained soil, rich in humus and organic matter. Tea bushes require warm and moist frost-free climate all through the year. Frequent showers evenly distributed over the year ensure continuous growth of tender leaves. Tea is a labour-intensive industry. It requires abundant, cheap and skilled labour. Tea is processed within the tea garden to restore its freshness. Major tea producing states are Assam, hills of Darjeeling and Jalpaiguri districts, West Bengal, Tamil Nadu and Kerala. Apart from these, Himachal Pradesh, Uttarakhand, Meghalaya, Andhra Pradesh and Tripura are also tea-producing states in the country. In 2015 India was the second largest producer of tea after China.

Answer the following MCQs by choosing the most appropriate option.24.1

Question 16:Which of the following states is the largest producer of tea?

Question 17:Tea bushes require ________ and moist frost-free climate all through the year.

Question 18:Which of the following countries was the largest production of tea in 2015?

Q.25. Read the source given below and answer the following questions :    (4 marks) What about subjects that do not fall in any of the three lists? Or subjects like computer software that came up after the constitution was made? According to our Constitution, the Union Government has the power to legislate on these 'residuary' subjects.We noted above that most federations that are formed by 'holding together' do not give equal power to its constituent units. Thus, all States in the Indian Union do not have identical powers. Some States enjoy a special status. Jammu and Kashmir has its own Constitution. Many provisions of the Indian Constitution are not applicable to this State without the approval of the State Assembly. Indians who are not permanent residents of this State cannot buy land or house here. Similar special provisions exist for some other States of India as well.Answer the following MCQs by choosing the most appropriate option.25.1

Question 19:Which of the following subjects comes under 'residuary' subjects?

Question 20:Which of the following states has its own Constitution?

Question 21:Who has the power to legislate on 'residuary' subjects?

Question 22:Indians who are not permanent residents of ________ cannot buy land or house here.
Q.26. Read the source given below and answer the following questions :    (4 marks)Kanta works in an office. She attends her office from 9.30 a.m. to 5.30 p.m. She gets her salary regularly at the end of every month. In addition to the salary, she also gets provident fund as per the rules laid down by the government. She also gets medical and other allowances. Kanta does not go to office on Sundays. This is a paid holiday. When she joined work, she was given an appointment letter stating all the terms and conditions of work.Answer the following MCQs by choosing the most appropriate option.26.1
Question 23:The passage given above relates to which of the following options?

Question 24:When does Kanta not go to her office?

Question 26:What was Kanta given, when she joined work?

Q.32. (i) Two places (A) and (B) are marked on the given political outline map of India. Identify them and write their correct names on the lines drawn near them.(A) The city associated with the Jallianwala Bagh incident.     (1 Mark) (B) The place where Gandhiji violated the Salt Law.     (1 Mark) (ii) On the same outline map of India, locate and label any three of the following with appropriate symbols:(a) Salal : Dam(b) Mumbai : Cotton Textile Industry(c) Netaji Subhash Chandra Bose : International Airport(d) Ramagundam : Thermal Power Plant(e) Visakhapatnam : Major Seaport     (3 Mark) 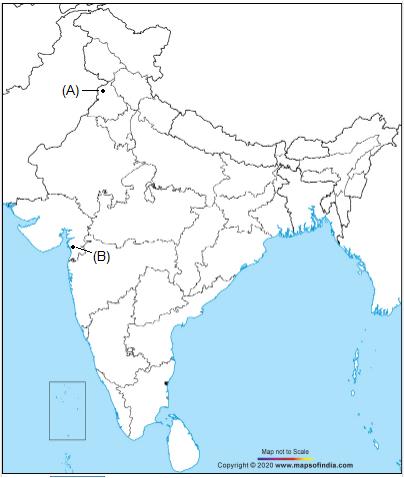 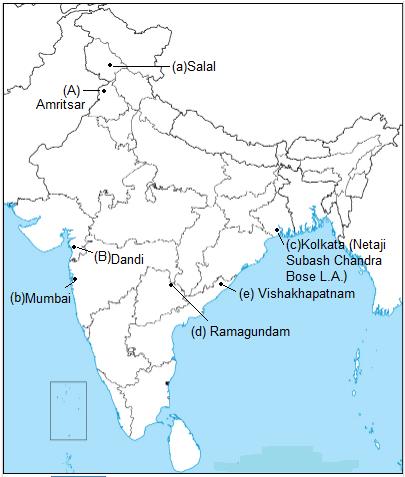