The document Notes | EduRev is a part of the Class 9 Course Sample Papers For Class 9.
All you need of Class 9 at this link: Class 9

Ans: (A)-3, (B)-1, (C)-2, (D)-4Q.2. The food procured by FCI is distributed to the______through the Public Distribution System.OrThe Green Revolution during the late 1960s and early 1970s helped India significantly to achieve_____.Ans: Poorer sections of societyOrSelf-sufficiency in foodgrains.Q.3. Which one of the following describes the drainage patterns resembling the branches of a tree?(a) Radial(b) Dendritic(c) Centrifugal(d) TrellisAns: (b) Dendritic.Q.4. Why the Godavari river is known as 'Dakshin Ganga’?Ans: The Godavari river is known as ‘Dakshin Ganga’ because of its length and large area covered by it.Q.5. In which type of forests were the villagers forbidden from taking anything?OrWhich species of trees are Suitable for building ships and railways?Ans: The villagers were forbidden from taking anything from the reserved forests.Or The species of trees suitable for building ships and railways are Teak and Sal.Q.6._______is a dry forested area below the foothills of Garhwal and Kumaon.Ans: BhabharQ.7. What is the age group of the population which is regarded as the workforce?OrWho said that food security means access to food through entitlements?Ans: In India, the workforce population includes people from the age of 15 to 53 years.OrAmartya Sen is the speaker here.Q.8. In geographical terms, Indian landmass is called a Peninsula. Why?Ans: Peninsula is a landmass that is bounded by the sea on three sides. As India has water bodies on its three sides, it is called, a peninsula.Q.9. _________ and threshers are provided by Iron industry.Ans: Tractors.Q.10. The famous book, 'Two Treatises of Government' is written by_______.Or The two Indians who responded to the ideas coming from revolutionary France are_____and______.Ans: John LockeOrTipu Sultan, Raja Rammohan RoyQ.11. Robert Mugabe was the President of(a) Ethiopia(b) Zimbabwe(c) Algeria(d) MozambiqueAns: (b) ZimbabweQ.12. The Godavari is the longest river of Peninsular India.Ans: True.Q.13. Bhabar is(a) Vast meadows in the low mountains.(b) Vast meadows in the high mountains.(c) A dry forested area below the foothills of Garhwal and Kumaon.(d) None of the aboveAns: (c) A dry forested area below the foothills of Garhwal and Kumaon.Q.14. The makers of the Constitution of India made a provision of______ to ensure representation of every section of society.Ans: Reserved constituenciesQ.15. Forestry comes under secondary sector.Ans: False.Q.16. The colonial government started commercial forestry in India in the____.Or In_______the Mataram Kingdom of Java Split.Ans: Early 19th century Or 1775.Q.17. Find the incorrect option:Successful slogans given by political parties in various elections are as follows:(a) "India shining" by the Congress Party in the 1971 Lok Sabha elections(b) "Land to the Tiller" by the Left Front in the 1977 West Bengal Assembly elections(c) "Save democracy" by the Janata Party in the 1977 Lok Sabha elections(d) "Protect the Self-Respect of the Telugus" by the Telugu Desam Party in the 1983 Andhra Pradesh Assembly electionsAns: (a) "India shining” by the Congress Party in the 1971 Lok Sabha electionsQ.18. What do you understand by ‘people as a resource’?Ans: People as a resource is a way of referring to a country’s working people in terms of their existing productive skills and abilities.Q.19. In the question given below, there are two statements marked assertion (A) and Reason (R). Read the statement and choose the correct option.Assertion (A) The seasonal hunger affects the landless agricultural labourers most.Reason (R) The seasonal hunger is the consequence of the seasonal nature of food production and harvesting.Options(a) Both A and R are true and R is the correct explanation of A.(b) Both A and R are true and R is not the correct explanation of A.(c) A is true but R is false.(d) A is false but R is true.Ans: (a) Both A and R are true and R is the correct explanation of A.Q.20. First, the Constituent assembly decided some basic principles which were agreed upon. Then a Drafting Committee prepared a draft Constitution for discussion. Several rounds of thorough discussion took place on the Draft Constitution, clause by clause. The members deliberated for 114 days spread over three years to finalise the Constitution. Every document presented and every word spoken in the Constituent Assembly ha^ been recorded and preserved. These are called ‘Constituent Assembly Debates’. These debates provide the rationale behind every provision of the Constitution.Analyse the information given above and consider one of the following as the correct option:(a) The Constituent Assembly(b) Constituent Assembly debates(c) The Preamble to the Indian Constitution(d) The making of the Constitution of IndiaAns: (d) The making of the Constitution of India

Q.35. (a) Two items (i) and (ii) are shown in the given outline map of France. Identify these items with the help of following information and write their correct names on the lines marked on the map.(i) The present capital of France(ii) The port of France enriched due to slave trade Ans: The answer map is given below: 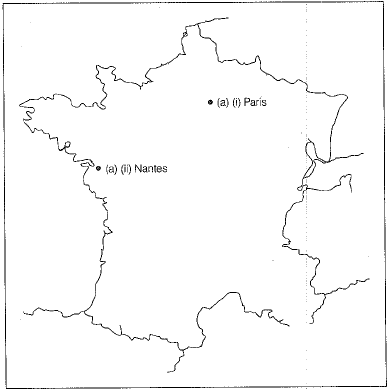 (b) Six features (i), (ii), (iii), (iv), (v) and (vi) are marked on the given outline map of India. Identify any four of these features with the help of the following information and write their correct names on the lines marked in the map.(i) A plateau rich in minerals.(ii) An area of black soil formed by a vast outpouring of lava, from many fissures developing in Earth's crust:(iii)A mountain range(iv) Famous national park in Uttarakhand(v) Bird Sanctuary in Rajasthan(vi) Lake in Jammu and Kashmir Ans: The answer map is given below 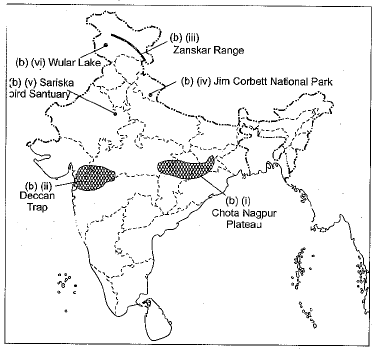