Sampling and Reconstruction of Band-Limited Signals

. B is also called the Bandwidth of the signal.To start off, let us first make an observation about the class of Band-limited signals.

Lets consider a Band-limited signal x(t) having a Fourier Transform X(f). Let the interval for which X(f) is non-zero be -B f B .

This implies that band limited signals are infinitely differentiable, therefore, very smooth .We now move on to see how a Band-limited signal can be reconstructed from its samples. 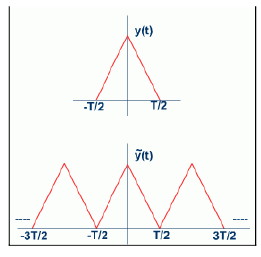 Where is the periodic extension of y(t) as shown

Now, Recall that the coefficients of the Fourier series for a periodic signal x(t) are given by :

That is, the Fourier Transform of the periodic signal

is nothing but the samples of the original transform.

Therefore, given that; y(t) is time-limited in [-T/2, T/2] and periodic, the entire information about y(t) is contained in just equispaced samples of its Fourier transform! It is the dual of this result that is the basis of Sampling and Reconstruction of Bandlimited signals :-Knowing the Fourier transform is limited to, say [-B, B], the entire information about the transform (and hence the signal) is contained in just uniform samples of the (time) signal !

is the  -nthFourier series co-efficient of

, the periodic extension of X(f). 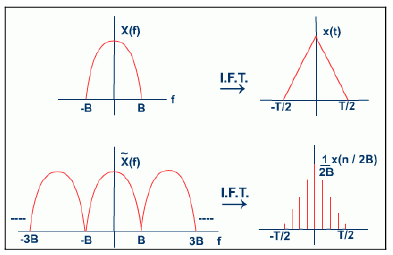 (Fourier series in f -- fundamental period is 2B and

What is the Fourier inverse of

The Fourier inverse of  is 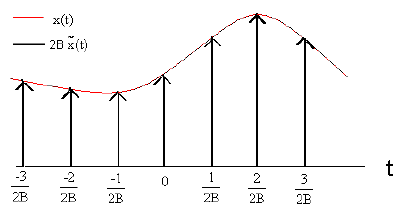 Thus we see that if we multiply the original Band-limited signal with a periodic train of impulses (period 1/2B, with impulse at the origin of strength 1/2B ) we obtain a signal whose Fourier transform is a periodic extension of the original spectrum. So how does one retrieve the original signal from ? We need a mechanism that will blank out the spectrum of

, i.e: multiply the spectrum with :

In other words, we need

An LSI system with above type of impulse response is called an Ideal Low Pass Filter .

On the basis of our discussion so far, we may state formally the Sampling Theorem.

A band-limited signal with band-width B may be reconstructed perfectly from its samples, if the signal is sampled uniformly at a rate greater than 2B.

Is it essential for the sampling rate to be greater than 2B, or is it acceptable to have a sampling rate of exactly 2B?What will happen if the value of X(f) at -B and B are not zero?

For example, consider sin(t). It has a bandwidth

. Say we sample the signal at a rate

What happens to all our samples? The signal has value zero at all multiples of π! You can't possibly reconstruct the signal from these samples. What went wrong? Lets look at the Fourier Transform involved: 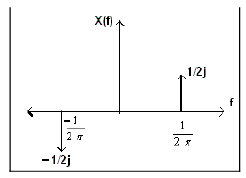 Note that the periodic extension (taking period to be

) of this signal is identically zero. Thus an ideal low pass filter cannot retrieve this spectrum from its periodic extension.

This is why the Sampling theorem says one must use a sampling rate greater than 2B, where B is the Bandwidth of the signal. Say we sample at a rate

What is the Fourier transform of 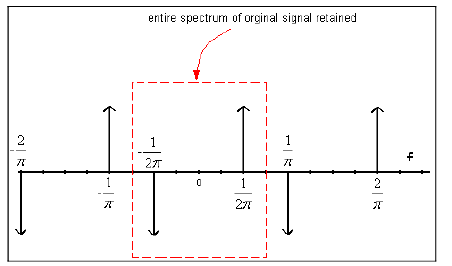 Now, an appropriate Low-pass filter can give us back the original signal !

Conclusion:In this lecture you have learnt:

Shannon-Whiltaker-Nyquist Sampling Theorem:A band-limited signal with band-width 'B' may be reconstructed perfectly from its samples, if the signal is sampled at a rate greater than '2B'. 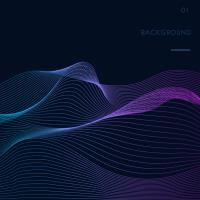