Scalar, vector, tensor functionsHaving got an introduction to algebra of tensors we next focus on tensor calculus. Here we shall understand the meaning of a function and define what we mean by continuity and derivative of a function.A function is a mathematical correspondence that assigns exactly one element of one set to each element of the same or another set. Thus, if we consider scalar functions of one scalar variable, then for each element (value) in the subset of the real line one associates an element in the real line or in the space of vectors or in the space of second order tensors. For example, Φ = Φ( t), u = û(t) = ui(t)ei , A = Â(t) = Aij (t)ei ⊗ ej are scalar valued, vector valued, second order tensor valued scalar functions with a set of Cartesian basis vectors assumed to be fixed. The components ui(t) and Aij(t) are assumed to be real valued smooth functions of t varying over a certain interval.The first derivative of the scalar function Φ is simply Φ = dΦ/dt. Recollecting from a first course in calculus, dΦ/dt stands for that unique value of the limit

In general, the nth derivative of u and A (for any desired n) denoted by dnu/dtn and dnA/dtn , is a vector-valued and tensor-valued function whose components are dnui/dtn and dnAij/dtn , respectively. Again we have assumed that dei/dt = o.By applying the rules of differentiation, we obtain the identities: 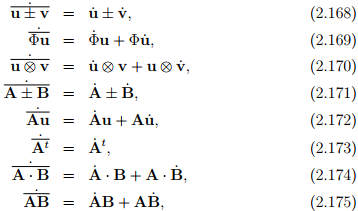 denote the region of the vector space that is of interest. Then a scalar field Φ, defined on a domain

, is said to be continuous if

denote the set of all vectors in the vector space. The properties of continuity are attributed to a vector field u and a tensor field A defined on

Consider a scalar valued function of one second order tensor variable A, Φ(A). Assuming the function Φ is continuous in A, the derivative of Φ with respect to A, denoted by

, is the second order tensor that satisfies

, both when A is invertible and when it is not.Taking trace of the Cayley-Hamilton equation (2.142) and rearranging we get

Using the properties of trace and dot product we find that

from which, we deduce that∂

If A is invertible, then multiplying (2.142) by A−t and rearranging we get

Next, we consider a smooth tensor valued function of one second order tensor variable A, f(A). As before, the derivative of f with respect to A, denoted by

, is the fourth order tensor that satisfies

obtained using equation (2.128b).Now, say the tensor valued function f is defined only for symmetric tensors, and that f(S) = S, where S is a symmetric second order tensor. Compute the derivative of f with respect to S, i.e.,

.First, since the function f is defined only for symmetric tensors, we have to generalize the function for any tensor. This is required because U is any second order tensor. Hence,

where A is any second order tensor. Now, find the derivative

Substituting the above in equation (2.190) we get

Recalling that all invertible tensors satisfy the relation AA−1 = 1, we obtain

Differentiating the above equation with respect to s

Evaluating the above equation at s = 0, and rearranging

.As before generalizing the given function, we have

Following the same steps as in the previous example we obtain: