Concept of a Field :

The “field” is thus a region of space where with every point we can associate a scalar or a vector (it could be more generalized but for our purposes, these two will do). Coming to a vector field, as we know, a vector quantity has both magnitude and direction. Consider our room again. We can associate a gravitational field with it. Though we generally say that the acceleration due to gravity has a constant value inside the room, it is also meant in an average sense. In reality, its value and direction differs from place to place and a mass inside a room experiences a different force (both in magnitude and direction) depending on where in the room it is placed. If we talk of associating a force with every point in a certain region of space, we are talking about a vector field. In 2 dimensions, the force is a function of positions x and y and in three dimensions it is a function of x, y and z. Other than gravitational field, examples of vector fields are electric field and magnetic field.

Pictorially, the scalar field being defined by a number associated with a point in space ,is usually represented using a fixed spatial structure called a grid. They are also represented by connecting all points having the same value of the scalar field by a contour (e.g. isothermals). Since a vector field has a magnitude and direction, it is a little more complicated to represent it graphically. Let us consider a two dimensional vector field

as an example. We can use a graph paper with conventional x and y axes. How does one represent the vector field? We take some unit to represent a unit length of the vector field. In the figure below we have taken one fifth the unit spacing along x or y axes. 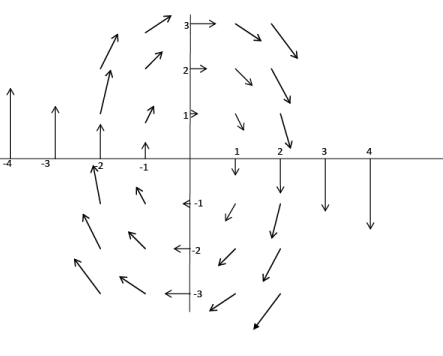 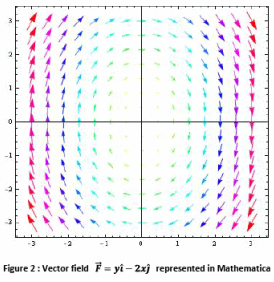 In electrostatics we deal with force field due to charges. In Fig. 3 we show the force on a unit positive charge due to two equal and opposite charges . The vector field has been plotted at close enough points so that the field lines appear continuous. To find the force on a positive charge at a point, we need to draw a tangent to the field lines at that point. These are known as “lines of force” in electrostatics”. The arrow on the lines show the direction in which the charge moves. 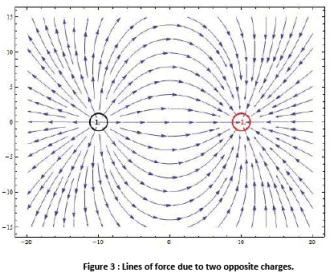 Figure 4 shows the force field due to two similar charges, a positive charge is repelled by both the charges. 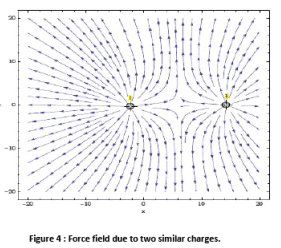 Let me first remind you of the definition of ordinary derivative of a function f(x) of a single variable x. We define it by the relationship

What if both x and y are to be allowed to vary simultaneously? The problem is that there are many ways the two variables can change simultaneously. Same is true for a function of three or more variables. The concept of derivative is thus to be generalized.

Suppose φ is a scalar function of the variables x, y and z. Starting from a point

if we move along an arbitrary direction by a length Δs, the value of the function at the destination

will be given by its value at the initial point plus the derivative of the function computed along the direction in which we moved times the length Δs. Such a derivative is called the directional derivative. Since

This is graphically shown in two dimensions :

Using the definition of partial derivatives, we have,

along three different directions : along

(i) The figure below shows the function

plotted along the z axis. It is a cup like structure. 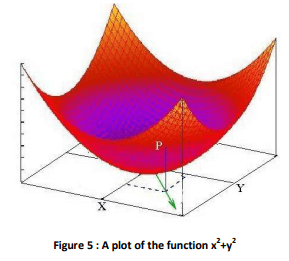 Since the function is in two dimensions, we have

The partial derivatives are given by

In order to calculate

we observe that along the given direction

the coordinates x and y are related by

Plugging these into the expression for

At the point (1,2), the directional derivative

(ii) The calculation is very similar to (i). The answer is zero.(iii) Following the method outlined in (i) above, the directional derivative at the point (1,2) can be shown to be given by

It may be noted that this is the radial direction at that point.

Which results in the directional derivative along

Where the “gradient operator

where θ is the angle between the gradient and he direction in which the directional derivative is taken. Thus

What does this physically mean? Suppose you are on a hill , not quite at the summit. If you want to come down to the base, there are many directions that you can take. Of all such possible directions, the fastest will be one which is steepest, i.e. with maximum slope. 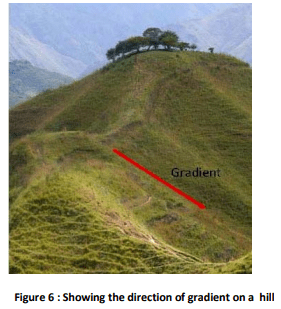 Since the rate of change in the value of the function is maximum along the gradient, it follows that such a direction is perpendicular to a surface on which the function is constant. Such a surface is called a “Level Surface”. Returning to the function In the present case

which, as expected, is in the radial direction which is normal to the level curve, which is a circle

Gradient of a Scalar Field is a Vector Field and its direction is normal to the level surface.

Formal Proof : Consider a level curve which is parameterized by a variable t, which varies from point to point on the curve. Example of such a parameter for the circle is angle θ, so that

Let the level curve be given by

The tangent to the curve is

Obviously, on the level curve

Which shows that the gradient is normal to the level curve.