Vectors representing physical quantities can be classiﬁed as free, sliding, or ﬁxed.

A sliding vector has a unique line of action in space but not a unique point of application. For example, when an external force acts on a rigid body, the force can be applied at any point along its line of action without changing its effect on the body as a whole,* and thus it is a sliding vector.

Rectangular components are convenient for finding the sum or resultant R of two forces which are concurrent. Consider two forces F1 and F2 which are originally concurrent at a point O. Figure 2/7 shows the line of action of F2 shifted from O to the tip of F1 according to the triangle rule of Fig. 2/3. In adding the force vectors F1 and F2, we may write

from which we conclude that 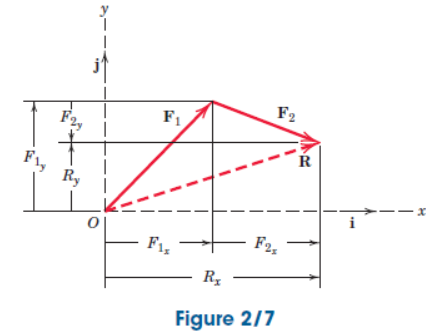 The forces F1, F2, and F3, all of which act on point A of the bracket, are specified in three different ways. Determine the x and y scalar components of each of the three forces. 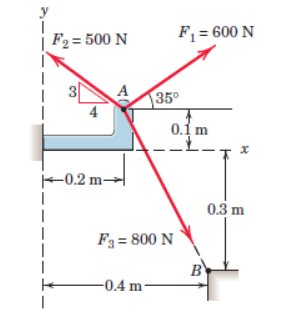 Solution. The scalar components of F1, from Fig. a, are

The scalar components of F2, from Fig. b, are

Note that the angle which orients F2 to the x-axis is never calculated. The cosine and sine of the angle are available by inspection of the 3-4-5 triangle. Also notethat the x scalar component of F2 is negative by inspection.

The scalar components of F3 can be obtained by first computing the angle α of Fig. c.

Alternatively, the scalar components of F3 can be obtained by writing F3 as a magnitude times a unit vector nAB in the direction of the line segment AB.Thus,

The required scalar components are then

which agree with our previous results.

Combine the two forces P and T, which act on the fixed structure at B, into a single equivalent force R. 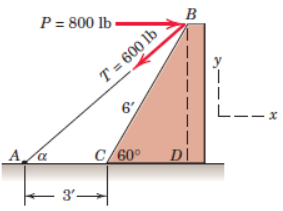 Graphical solution. The parallelogram for the vector addition of forces T and P is constructed as shown in Fig. a. The scale used here is 1 in. =800 lb; a scale of 1 in. = 200 lb would be more suitable for regular-size paper and would give greater accuracy. Note that the angle a must be determined prior to construction of the parallelogram. From the given figure

Geometric solution. The triangle for the vector addition of T and P is shown in Fig. b. The angle α is calculated as above. The law of cosines gives

From the law of sines, we may determine the angle θ which orients R. Thus, 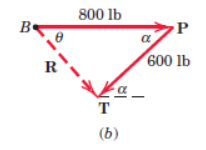 Algebraic solution. By using the x-y coordinate system on the given figure, we may write

The magnitude and direction of the resultant force R as shown in Fig. c are then

The resultant R may also be written in vector notation as Part (3). The components of F in the x- and y'-directions are nonrectangular and are obtained by completing the parallelogram as shown in Fig. c. The magnitudes of the components may be calculated by the law of sines. Thus,

The required scalar components are then