Ans: Flows are variables whose magnitude is measured over a period of  time

Ans: Stocks are variable whose magnitude is measured at a point of time

Ans: Nominal Flow/Money Flow is the flow of factor payments and payments for goods and services between households & firms. 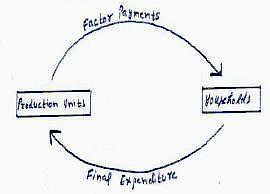 (Q5)   Which of the following is a stock ? (Choose the correct alternative)

(Q3) There are ……… phases in the circular flow of income.

(a) Production of goods and services

(b) Flow of factor income

(c) Expenditure on goods and service

(a) Gives information about injections and leakages from the flow of income.

(b) Enables estimation of national income.

(Q6) From the macro point of view, an economy is divided into …. Sectors.

(Q9) In a two-sector economy, the condition of equilibrium is :

(Q11) Generation and distribution are the two phases in circular flow of income.

Ans: False.  There are 3 different phases (generation, distribution and disposition) in circular flow of income..

(b) Price determination of a commodity

(Q5) Give two examples of the study of aggregates of the economic system ?

(Q6) Is Study of problems of agricultural labour in India a macroeconomics study ?

(Q7) Is Study of wages of Computer Engineer  in India a microeconomics study ?

(Q8) State whether the following are Stock or Flow Variables

(f) Expenditure on food by household

(Q1) What is the principle of circular flow of income and product ?

(Q3) Why should the aggregate final expenditure of an economy be equal to the Aggregate factor payment ?

(Q4) Distinguish between stock and flow ? Between net investment and capital which is stock and which is flow ? Compare it with flow of water into the tank ?