(Q1) What are externalities? Give an example of a positive externality and its impact on welfare of the people.Ans : Use of public park for pleasure , Increases welfare

(Q2) What are externalities ? Give an example of a Negative externality and its impact on welfare of the people.

(Q3) What are non-monetary exchanges? Give an example . Explain the impact on use of GDP as an index of welfare of the people?Ans : It refers to the goods and services produced but not exchanged through money like the domestic services rendered by family memebers to each other . These are difficult to estmate and so it escapes national income estimation . These exchanges however have positive effect on the welfare of the people

(Q4) Explain the difference between final good and intermediate good. Give one example of each.

(Q7) How should the following be treated in estimating national income of a country ? You must give reason for your answer.(i) Taking care of aged parents(ii) Payment of corporate tax(iii) Expenditure on providing police services by the government. (6 marks)Ans : yes , no , yes

(Q8) Giving reasons explain how the following are treated while estimating national income :(i) Payment of fees to a lawyer engaged by a firm;(ii) Rent free house to an employee by an employer;(iii) addition to stock during year(iv) Purchase of taxi by taxi driverAns : No , Yes, Yes , yes

(Q9) How should the following be treated in estimating national income ? Give reason :(i) Free medical facilities to employees.(ii) Pension to senior citizens.(iii) Interest payment by a government owned firm. (6 marks)

(Q10) How should the following be treated in estimating national income?Give reason :(a) Exp. by a firm on payment of government fees to a chartered accountant(b) Payment of corporate tax by firm(c) Purchase of regrigerator by a firm for own use

(Q1) Which of the following is a characteristic of a good?(a) Intangible (b) Can be stored(c) Production and consumption must happen simultaneously(d) Cannot be transferredAns : (b)

(Q6) State any four precautions that need to be kept in mind when using the value added method for calculating national income. 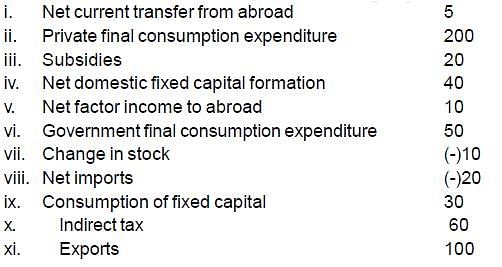 (Q17) Suppose in an imaginary economy GDP at Market Price in a particular fiscal year was Rs. 4,000 crores, National Income was Rs.2,500 crores, Net Factor Income paid by the economy to Rest of the World was Rs.400 crores and the value of Net Indirect Taxes is Rs.450 Crores. Estimate the value of consumption of fixed capital for the economy from the given data.(4M)

(Q1 National income is the sum of factor incomes accruing to :(a) Nationals (b) Economic territory(c) Residents (d) Both residents and non-residents

(Q3) Unforseen obsolescene of fixed capital assets during production is ::(a) Consumption of Fixed Capital (b) Capital Loss(c) Income Loss (d) NoneAns :(b)

(Q5) Sale of petrol and diesel cars is rising particularly in big cities. Analyse its impact on gross domestic product and welfare.(4M)

(Q6) Government incurs expenditure to popularize yoga among the masses. Analyse itsimpact on gross domestic product and welfare of the people.(4M)

(Q7) Governments spends on child immunization programme . Analyse its impact on GDP and welfare of the people

(Q8) Giving reason explain how the following should be treated in estimation of national income(a) Payment of Corporate taxes by firm(b) Purchase of Machinery by factory for own Use(c) Purchase of Uniforms for nurses by a hospitalAns : No , Yes , No