The document Seating and Circular Arrangement LR Notes | EduRev is a part of the SSC Course General Intelligence and Reasoning for SSC CHSL.
All you need of SSC at this link: SSC

Firstly, we can identify that these problems can be categorized into two types:

As the name suggests, linear seating arrangement problems are those where arrangements are made in rows or lines. The arrangement can be in a single row, or there can be multiple rows, but generally, at our level, two rows questions are asked. 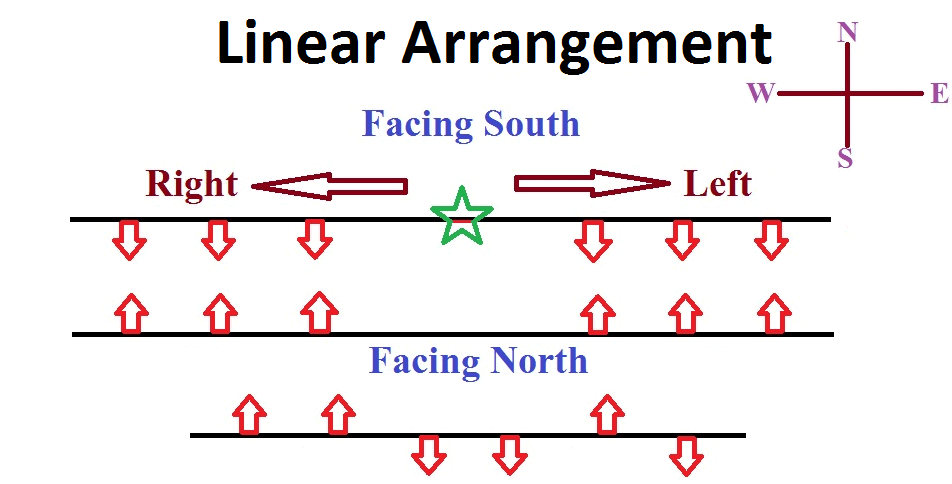 One row Problems are those when the arrangement is made in a single line. These problems can be divided into two types of conditions:

And in the two-row arrangement, objects are arranged in two different rows facing each other. Now we can move on to solve an example of linear arrangement so that we have a better understanding of these types of questions. But before moving forward with an example, keep in mind these important points in mind.

Example: Twelve persons are sitting in two parallel rows containing six persons each, in such a way that there is an equal distance between adjacent persons. In row 1, A, B, C, D, E and F are seated (But not necessarily in the same order) and all of them are facing south. In row 2, P, Q, R, S, T, and V are seated (not necessarily in the same order) and all of them are facing north. Therefore, in the given seating arrangement, each person seated in a row faces another person of the other row.A Sits third to the left of E. The person Facing A sits second to the left of T. Two persons are sitting between T and P. C and D are immediate neighbours. C and D do not sit at any of the extreme ends of the line. Only one person sits between B and C. the person facing D is an Immediate neighbour of Q. V is not an immediate neighbour of P. S does not face A.Solution:

► 1st paragraph gives information regarding how many persons and in which direction they face.► 2nd paragraph provides the positioning of persons.

Steps to solve the question:

Step 1: 12 persons are sitting in parallel rows, and each row contains 6 persons.

From the above information, let’s make a parallel row: Step 3: Two persons are sitting between T and P, which means to the third left of T, P is placed, i.e. position 3 in Row 2.

Step 4: C and D are immediate neighbours. C and D do not sit at any of the extreme ends of the line.

Step 5: The person facing D is an immediate neighbour of Q. So, Q is placed at the extreme left end of Row 2, i.e. position 1. Henceforth now we are in a position where we can easily answer all the questions asked in the exam based on the above problem.

The above example was a problem of two ways linear seating arrangement with directions where with the use of diagrammatic approach we made it simpler and uncomplicated which would have been otherwise an obvious tedious task to solve. This is just one example, there can be numerous others with different combinations and arrangements but now we have learned how to tackle them and make them hassle-free. 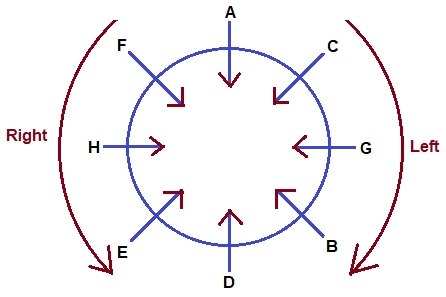 Example: Consider an example now, representatives from eight different states viz. L, N, P, R, T, V, X and Z are sitting around a circular table facing the centre but not necessarily in the same order. Each of them is from a different state namely, Maharashtra, Assam, Gujarat, Kerala, Karnataka, Delhi, Madhya Pradesh and Punjab.

Now before moving forth to solution, understand these basic steps that will help us solve this problem:(i) Read the question carefully and note down the name or the characters that have to be arranged carefully.(ii) Check and write down whether all the character is facing towards the centre or outwards or haphazardly some facing towards while others outward.(iii) Now we will use diagrammatic representation to solve the question. Draw a circle with equidistant points and with the help of arrows signify the direction in which the characters are facing.(iv) After this start reading the information and allot the places to the characters according to the information given in the question.(v) Make cases for more multiple possibilities and then rule out those cases that don’t fit the given information in the question.(vi) Similarly go on deducing the cases and reach out to one possible case, which is the solution and eliminate all others.

Solution:Now we will use the above steps and formulate the solution above problem:In the above example, we are given 8 alphabets each corresponding to 8 states.Representatives: L, N, P, R, T, V, X and ZStates: Maharashtra, Assam, Gujarat, Kerala, Karnataka, Delhi, Madhya Pradesh and Punjab.

Now we will read the main problems and try to get direct information. According to the problem: Now no other direct information is given with which we can plot the diagram. So, we move on to the next statements.4. T is to the immediate left of P.5. Neither P nor T is an immediate neighbour of either N or the representative from Gujarat. So, we get three possible cases. 6. Representative from Gujarat sits second to the right of R.7. R is neither the representative of Kerala nor Madhya Pradesh.So the third case gets eliminated as there is no place left for Gujarat.Thus, cases 1 and 2 get amended, as shown below: 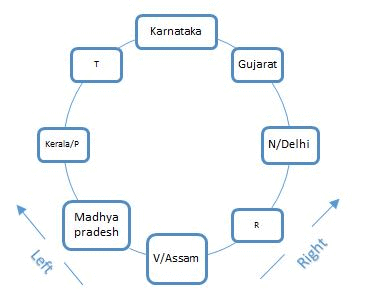 (B)(i) Madhya Pradesh is not possible as there is no place for representatives of Punjab.(ii) Similarly, Gujarat and Karnataka are also not possible. Direction: Each of these questions are based on the information given below :

Question 1:Who among the following is to the immediate left of F?
Explanation

J is to the immediate left of F.

Question 2:What is true about J and K?
Explanation

Question 3:How many persons are seated between K and F?
Explanation

Three persons are seated between K and F(H, L and J) or E, I and G.

Question 4:Who among the following are three lady members?
Explanation

The three lady members are E, H and G.

Question 5:Who among the following is seated between E and H?
Explanation

K is seated between E and H.