Statement: It is impossible to transfer total heat into work in a cyclic process in the absence of other effect (by Lord Kelvin).

In another way, it is also stated that it is impossible for heat to be transferred by a cyclic process from a body to one which is warmer than itself, without producing other changes

at the same time.

A machine that can convert heat into work is said to be heat engine.

It is a system that performs the conversion of heat or thermal energy to mechanical work. 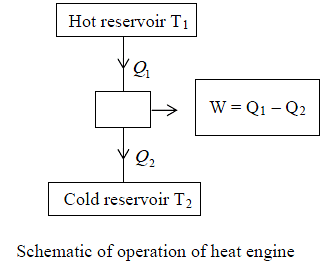 It is an effectively infinite pool of thermal energy at a given constant temperature. Ideally its heat capacity is large enough, that when it is in thermal contact with another system, its temperature remains constant.

It can be shown that, it is most efficient cycle for converting a given amount of thermal energy into work.

A system undergoing a Carnot cycle is called a Carnot heat engine.

Stages of the Carnot cycle: 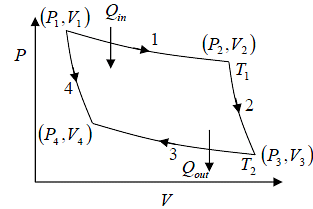 1. Reversible isothermal expansion of the gas at hot temperature, T1 (isothermal heat addition). During this step (1 to 2), the gas is allowed to expand and it does work on the surrounding. The gas expansion is propelled by absorption of Q1 quantity of heat from the high temperature T1 .

2. Reversible adiabatic expansion of the gas. For this step (2 to 3) on figure, the gas

continues to expand i.e., working on surrounding. The gas expansion causes it to cool to

4. Adiabatic compression of the gas (4 to 1). During this step, the surrounding do work on the gas, compressing it and cause the temperature to rise to T1 . At this point the gas is in the same state as that of the starting at step 1.

W is the work done during cycle and Q1 is heat given to system.

W1  = work done during process 1 to 2 for isothermal process =

Since, the change in internal energy during the process i.e., dU = 0

(From first law of thermodynamics)

W2 is work done during process 2 to 3 in adiabatic process.

W3 is work done during process 3 to 4 in isothermal compression.

W4 is the work done during the adiabatic process from 4 to1, is given by 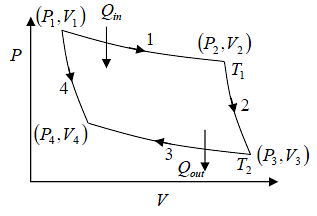 (a) Calculate the work done in complete cycle

(d) Show that efficiency of the engine is 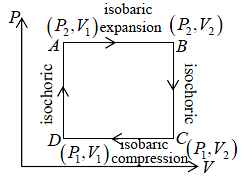 Since, P1 < P2 , therefore heat is rejected during this process

Heat exchange during the process

Since, V1 < V2, so heat is rejected during this process

Now, heat exchange during this process is,

(c) Heat flowing into the cycle is,

compressed isobarically to (P2,V1) . Finally the pressure is increased to P1 at constant

(a) Show the process in P -V Diagram

(b) Show that the efficiency of the cycle is

(a) The cycle is shown in the figure 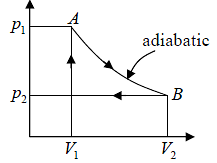 The work the system does in the cycle is

Because AB is adiabatic and an ideal gas has the equations

During the CA part of the cycle the gas absorbs heat

Hence, the efficiency of the engine is

Entropy is an extensive thermodynamic property that is measure of a system’s thermal energy per unit temperature, which is unavailable for doing useful work. Thermodynamic entropy is a non-conserved state function. For Isolated system, entropy never decreases.

The infinitesimal change in the entropy (dS) of a system is the infinitesimal transfer of heat energy(∂Q) to a closed system, which is driving a reversible process, divided by temperature (T) of the system.

Laws of thermodynamics and entropy

According to first law of thermodynamics

From definition of Entropy

From first and second law of thermodynamics

Slope of a constant volume process is more than a constant pressure process,

For Ideal Gas process is given by PVn = C, For different value of n the

the slope is given by

Consider an irreversible cyclic engine, working between T1 and T2 . If reversible engine is operating between same temperature, then from Carnot’s theorem.

This relation is known as inequality of Clausius.

Example 2: Two Carnot Engines A and B are operated in series. The first one, A receives heat at 900K and rejects to a reservoir at temperature T K . The second engine, B receives the heat rejected by the first engine and then rejects to a heat reservoir at 400K .

Calculate the temperature T for the situation.

(a) The work outputs of the two engines are equal

(b) The efficiency of the two engines are equal.

Example 4: A mole of an ideal gas undergoes a reversible isothermal expansion from volume V1 to 2V1 .

(a) What is the change in entropy of the gas?

(b) What is the change in entropy of the universe?

Suppose the same expansion takes place as a free expansion:

(c) What is the change in entropy of the gas?

(d ) What is the change in the entropy of the universe?

(a) In the process of isothermal expansion, the external work done by the system is

Because the internal energy does not change in this process the work is supplied by the heat absorbed from the external world. Thus the increase of entropy of the gas is

(d) In this case, the state of the heat source does not change, neither does its entropy.

(b) Show that it is necessarily positive.

Let c be the specific heat of the liquid. On mixing equal mass m of the same liquid at temperature T1 and T2 , where T1 > T2.

Let T be the equilibrium temperature of mixture, then

, is the entropy change of hotter liquid when cooled fromT1 to T

ΔS2 ⇒ Entropy change of cold liquid when heated from T2 to T.

ΔS = Entropy change of the system.

(b) We know that arithmetic mean is greater than geometric mean i.e., AM > G.M. So,

ΔS1 is entropy change when ice is converted into water

ΔS2 is entropy change when water is heated from T1 to T2 i.e.,

ΔS3 is entropy change when water changes into vapour i.e.,

(a) Determined the change in Entropy for Body.

(b) Determined the change in Entropy for Reservoir.

(b) The change of entropy of the heat source is

Example 8: Water powered machine, A self-contained machine only inputs are two equal steady streams of hot and cold water at temperatures T1 and T2. Its only output is a single high jet of water. The heat capacity per unit mass of water, C , may be assumed to be independent of temperature. The machine is in a steady state and the kinetic energy in the incoming streams is negligible.

(a) What is the speed of jet in  terms of T1,T2 and T, where T is the temperature of water in the jet?

(c) What is the maximum possible speed of the jet?

(a) The heat intake per unit mass of water is

(b) Since the entropy increase is always positive, i.e.

(c) For maximum speed T must be minimum

Example 9: Two identical bodies have internal energy U + NCT , with a constant C . The values of and C are the same for each body. The initial temperatures of the bodies are T1 and T2, and they are used as a source of work by connecting them to a Carnot heat engine and bringing them to a common final temperature Tl.

(a) What is the final temperature Tl ?

(b) What is the maximum work delivered?

(a) The bodies attain an equilibrium temperature of T .

(b) Conservation of energies gives W =