- First of all the silk worm were discovered in china by LOTZU EMPRESS of KWANG Ti in 2697 B.C.

- In India sericulture is an ancient industry dating back at least to the second century B.C.

- Silk production in India is 2,969 tonnes per year

- India ranks 3rd in the production of silk. Mysore (Karnataka) is the leading silk producer state. 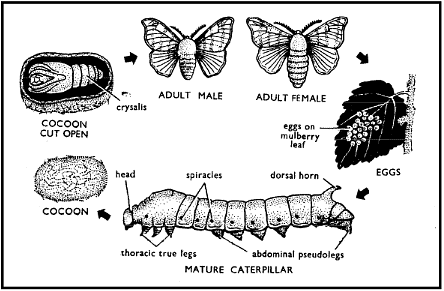 Type of silk from silkworm

- These caterpillar form a cocoon around them

- Hatching in summer takes about 10 days

- It spines its own silken cocoon

- 5th instar caterpillar (develops salivary glands stops feeding & secrete clear viscous fluid. The secreted fluid comes out through spinneret (a narrow pore situated on the hypopharynx) and takes the form of long fine thread of silk (1000-1200 metres in 3 days) which hardens on exposure to the air and wrapped around the body of the caterpillar in the form of a covering called as COCOON.

- This secretion forms two cases of fibres, cemented together by sericin & carotenoid pigments.

- Entire cocoon is formed within 3 days

– The process of removing the threads from the killed cocoon is called as reeling. (Post cocoon processing)

- The scientific method of care & management of honey bees is called APICULTURE.

- They show polymorphism & good division of work.- The diameter of a normal bee hive is about 30-90 cm. In it the number of bees is about 50-60 thousands.

- A highly organised division of labour is found in the colony of honey bee.

(i) Apis dorsata (Rock bee)- It is also named as saarang bee. It is of largest size and produces highest yield of honey. However, It is of highly aggressive nature and migratory species, which is not suitable for rearing by man.

(ii) Apis indica (Indian Mona-bee)- It lives across the whole country of India and is smaller in size than saarang-bee, It is mild in nature, so that it is easily manageable during rearing. Mona-bee yields about 3-4 kg. of honey per hive.

(iii) Apis florea (Bhringa-bee)- This bee is smallest in size and of timid nature. It only yields about 250 gms of honey every hive. Hence is not suitable for commercial purpose.

(iv) Apis mellifera (European bee)- This bee is of mild nature. It yields 9-10 times more honey than mona-bee. It is the most useful bee for commercial purpose. The Italian variety of this species is by far the most important variety.

1. Queen :- It is about 15-20 mm long and its body is about three times larger & 3 times heavier than a worker bee. The legs & wings are short but crop is long. It has ovary which is filled with eggs.Only one queen develops from fertilized egg ( i.e., it has 32 chromosomes). It feeds on Royal jelly.Its sole function is - Reproduction. It lays 2000 eggs everyday. One queen lays approx. 1500000 egg in its whole life time.

2. Drones :- About 100 male bees are present in one hive. These are approx. 7-15 mm long. In these salivary and wax secreting glands and stings are absent. Like the queen they also depend on worker bees for nutrition.Their sole duty to fertilize the queen. Drones are developed from unfertilized eggs so there are only 16 chromosomes present in them.

3. Worker :- Their number is maximum in a hive. These are the smallest bees. Their wings and mouth parts are very strong. Their mouth parts & legs are modified to suck the nectar of flowers and to collect the pollen grains respectively. Pollen basket is present on hind leg (tibial) for collection of pollen.Pocket like wax glands are present at base 2nd to 5th abdominal segment.Worker bees are sterile females. These are developed from fertilized eggs. Due to high labour the life time of a worker bee is about 6-8 weeks.

Modern method of apiculture makes use of artificial bee hive. There are more convenient as these may be reused and can be shifted easily to safer place in adverse weather conditions. In addition to above, these are easy to handle and can be carried in a simple and easy manner.

Procurement and rearing of honey-bees -Male honey-bees (drones) are usually captured in the evening hours while they are swarming. After procurement, they are introduced in the brood chamber of the artificial hive. A queen and some workers obtained from a natural bee-hive are released into the artificial hive. Here they are fed with a artificial diet containing 2/3 parts of sugar and 1/3 part water, for some days. The queen of the hive needs to be replaced by a new one every year. The old queen is removed out of the hive. A small amount of the honey from this hive is applied on the fresh queen's body and the same is released into brood chamber. The artificial bee-hives prepared in such manner are placed in open fields or gardens or at some appropriate place.

The site where the hives are placed should be moist and clean. A good flowering crop and other plants as a source of nectar and pollen grains to the honey-bees must be available within the circumference of 1-2 kms from the hive. In the condition of overcrowding of males, some of them including a queen should be removed from that hive. A perennial source of clean water is also essential in the close vicinity of the hive. Honey bees produce honey  and wax which are very useful commodities to man. They also play an important role in pollination of agricultural and horticultural fields.

- After fertilization the queen lays about 2000/eggs/ days

- One egg in each broad cell

- The egg hatches in about 3 days

– From the 4th day all the worker bees provides food which consist pollen & honey to all baby bees.

– From the 7th day Royal jelly is secreted from the maxillary glands of worker bees, Larva, pupa & queen bee are fed on this royal jelly.   From 12th to 18th day secretion of wax gland also starts.

– Propolis is a gum like substance which is used by bees to repair the old & destructed parts.

- Eggs destined to become drones are unfertilized & are laid in cells of slightly greater diameter than those of workers.

- The egg hatched in royal chamber is looked after by workers & fed with royal jelly so that it convert into queen.

- Nectar is a sugary substance in the flowers.

Those bees which go out for search of food have highly developed visual & taste sense for correct recognition of route. Bees recognised their route with the help of position of sun & smell of flowers.

Bees communicate with each other so that all other members also find the food source.Ernst spytzner 1788 explained that honey bees have a definite kind of communication medium. This special type of speed is called "Dance of honeybee."

After that Karl Von Frish 1969 also explained the "Dance of honeybee" and he got noble prize for that.

– The following type of dances can be seen in honey bees.

1. Round Dance :- This dance indicates that the food source is about less than 75m from a hive. The direction of food source can be identify with the help of smell of flowers which is present on the body of a scout honey bee.

With the help of this dance bees give the information of that food source at a very far distance. In it direction & distance of food source are indicated according to the position of sun. When the honey bee is flying in a straight line it wagging its tail and wings to produce the sound. Distance of a food source can be identified with the help of speed of dance, speed of wagging tail & speed of sound.

– If the motion is in upper side of a straight line with wagging tail then food source will in the same direction of sun.

– If the motion is in lower side of a straight line then food source will be in opposite direction of sun.

- It is very useful by product of bee keeping industry

- It is obtained from bee hives

- This is a secretion of workers bees abdominal glands

- It is prepared from a plant substance (pollen) called 'PROPOLIS'

- The propolis gives the wax a hardly nature

- The insect is parasite lives and breeds on the following host plants.

Lac Insect :-– They secrete a gum like substance which covered them from all the sides & after that a 1-2 inch thick layer is formed around the branches.Branches of trees are cut down and then dipped into hot water so that the gummy substance can be separated. It is done for the preparation of Lac.Now some chemical are also added to prepare the lac which is available in markets.

- The lac is a secretory product of lac glands

- The secretion covers the body of insect

Lac insect has separate male and female individuals which exhibit sexual dimorphism. Males are 1.2-1.5 mm in length and have red coloured body. Males are smaller than females which measure about 5 mm in length. Female posses delicate body which is oval in shape. Head, thorax and abdominal regions in a female are not very much distinct. Further, the females are devoid of wings and have a bright red body, It lives in a chamber made of resin.

A female insect lays about 200-500 eggs  in its resin chamber. After 6 weeks of egg laying, a first instar larva is hatched out of the each egg. It is also called nymph. These nymphs are active individuals, and eventually escape out from the resin chamber. Now these gather on the small twigs of succulent plants. The dermal glands present in the body of nymph secrete lac  which dries after its contact with the air. Nymphs continuously derive their nutrition in the form of sap from the succulent plants. After 6-8 months of stable form the nymphs undergo metamorphosis. Now they develop into wingless females (about 70% of total nymphs) and winged males (about 30% of total nymphs). A lac insect, living on a single host plant, repeates it life cycle twice, one during October-November, and the  other during June-July every year.

Lac insect sucks the plant sap by introducing its mouth parts into plant tissue. The quality of lac depends on the nature of host plant. The best quality of lac is obtained by the lac insect which have been reared on ber and palas plants. This lac is named as Kusumic lac.

Lac is cultivated by both the methods, viz., natural and artificial methods. However, the artificial method is considered to be more developed and reliable method. In artificial propagation, small twigs of the host plant are tied with  the other host plant, in  a way that the twigs touch the later at many places. This facilitates easy entry of nymphs into another host through swarming. After the propagation, the lac secreted by the insects is obtained at adequate time. This is known as harvesting. The lac produced before swarming is called immature lac or ari lac, while that produced after swarming is called mature lac.

The lac initially collected is called seed lac which after purification gives button lac. Kiri lacis the lac with many impurities. (Obtained from Keria lacca)

In India about 2 crores kg of lac is produced every year, which is more than 6% of the total world production. Of the total production of India, 50% is contributed by the Chhota Nagpur region of Bihar. Lac is a very useful material which is used for manufacturing bangels, utensils, toys, polish, varnish and for electrical goods. Ladies in India use lac in colouring material, mahawar, as a cosmetic to make up their feet. Indian Lac Research Institute, Namkum (Ranchi) is engaged in the research and extension programmes to promote and improve the lac culture in India.