The document Sets, Functions and Relations CA CPT Notes | EduRev is a part of the CA CPT Course Business Mathematics and Logical Reasoning & Statistics.
All you need of CA CPT at this link: CA CPT

In our mathematical language, everything in this universe, whether living or non-living, is called an object.

SETSA set is defined to be a collection of well-defined distinct objects. This collection may be listed or described. Each object is called an element of the set. We usually denote sets by capital letters and their elements by small letters.Examples: 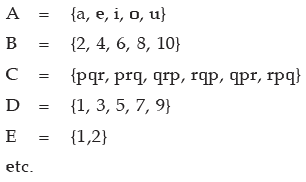 This form is called Roster or Braces form. In this form we make a list of the elements of the set and put it within braces { }.Instead of listing we could describe them as follows :

This form is called set-Builder or Algebraic form or Rule Method. This method of writing the set is called Property method. The symbol : or/reads 'such that'. In this method, we list the property or properties satisfied by the elements of the set.

Thus Fig. 1(a) shows a universal set S represented by a rectangular region and one of its subsets P represented by a circular shaded region.The un-shaded region inside the rectangle represents P'.Figure 1(b) shows two sets P and Q represented by two intersecting circular regions. The total shaded area represents PUQ, the cross-hatched "intersection" represents P ∩ Q.The number of distinct elements contained in a finite set A is called its cardinal number. It is denoted by n(A). For example, the number of elements in the set R = {2, 3, 5, 7} is denoted by n(R). This number is called the cardinal number of the set R. 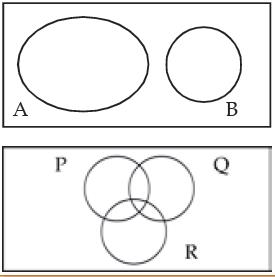 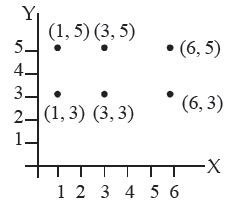 If X=Y= the set of all natural numbers, the product set XY represents an infinite equal lattice of points in the first quadrant of the XY plane.RELATIONS AND FUNCTIONSAny subset of the product set X.Y is said to define a relation from X to Y and any relation from X to Y in which no two different ordered pairs have the same first element is called a function.Let A and B be two non-empty sets. Then, a rule or a correspondence f which associates to

each element x of A, a unique element, denoted by f(x) of B , is called a function or mapping from A to B and we write f : A→BThe element f(x) of B is called the image of x, while x is called the pre-image of f (x).

Notice that this particular subset contains all the ordered pair in X.Y for which the X element (x) is less than the Y element (y). So in this subset we have X<Y and the relation between the set, is "less than". This relation is not a function as it includes two different ordered pairs (1, 2), (1, 3) have same first element.

Represented on a mapping diagram it is a one-one mapping of X onto Y.

same image in B, then f is said to be a constant function.

This relation is a function (a constant function). It is represented on a mapping diagram and is a many-one mapping of X into Y. This is an example of many-one mapping.

Equal Functions: Two functions f and g are said to be equal, written as f = g if they have the same domain and they satisfy the condition f(x) = g(x), for all x.

A function may simply pair people and the corresponding seat numbers in a theatre. It may simply associate weights of parcels with portal delivery charge or it may be the operation of squaring, adding to doubling, taking the log of etc

The function f here assigning a locker number to each of the persons A, B and C. Names are associated with or mapped onto, locker numbers under the function f.We can write f : X → Y or f(x) = y or f(B) = 236

Inverse Relation: If R be a relation on A, then the relation R–1 on A, defined by 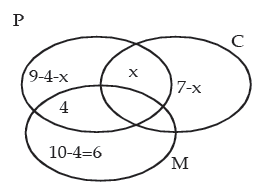 Hence, 42% of the Indians like both grapes and bananas.