"Set" is synonymous with the words "collection", "aggregate", "class" and is comprised ofelements/objects/members.

A set is a well-defined collection of elements. By well-defined elements it meansthat given a set and an element, it must be possible to decide whether or not theelement belongs to the set. A set can be described in any one of the followingways. For example, the set of beautiful Actress of Bollywood or the set of GoodPlayers of cricket in India are not sets as the world beautiful and Good are not welldefined. What are the criteria of choosing an actress as beautiful and which playeris said to be a good player of cricket. But on the other hand if we say Set of goodplayer of cricket in India those has played at least 25 international games, will be aset as the word Good is now well defined. 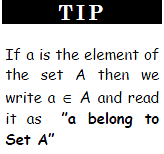 Representation of a Set

A set can be described in two different ways. 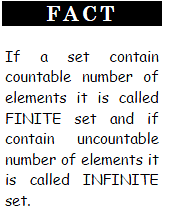 Cardinal number of a set

SubsetsLet A and B be two sets. If every element of A is contained in B, then A is calledthe subset of B. 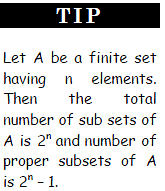 The cardinal number of any set A is 2n, where n = number of elements present in set A.

Q = The set of all rational numbers.

R = The set of all real numbers.

R - Q = The set of all irrational numbers.

etc. are all irrational numbers.

Operations of setsUnion of Sets:The union of two sets A and B, is a set containing all the elements present in setA or in set B. The union of set A and B is represented as A U B.So, AUB = {x | x ∈ A or x ∈ B} 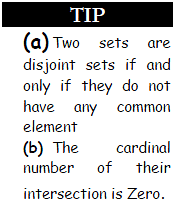 Complement of a set:The complement of set A in U the set of those elements which are present in Universal set but not present inset A. Compliment of A is denoted by A' The shaded part represents A'.So, A‘= {x | x ∈ U and x ∉ A}

(a) Also the Compliment of set A is defined as the difference of Universal set U and set A. i.e.⇒ A‘ = U - A

2. The representation of A U B in Venn diagram is

3. The representation of A ∩ B in Venn diagram is

Maximum and Minimum elements in a set

Let us consider the formula, n(A ∪ B) = n(A) + n(B) - n(A ∩ B) and imagine that the value of n(A ∪ B) is not given and asked to find the value of n(A ∩ B), then we will get the range of the values. Let us understand the concept of maximum and minimum values with the help of an example.

Sol. Let us consider that the number of student who enroll in all the three streams be x. Thus according to the Venn diagram drawn with the help of given information. 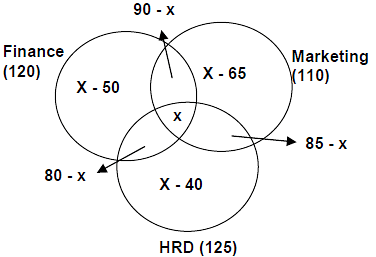 Ex.3 If in a Survey, Organized by any N.G.O on the cold drinks after effects found that 80% of the total people like Coca - Cola and 70% like Limca. What can be the minimum and maximum number of people who drink both the drinks?