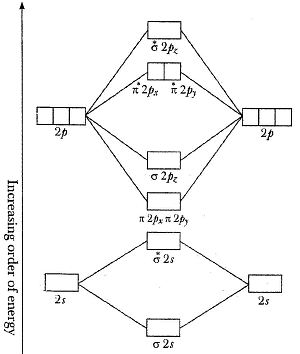 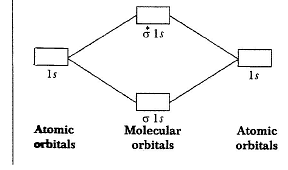 If the energy differences between 2s and 2p atomic orbitals are small, there is a possibility of mixing of molecular orbitals σ(2s) with σ(2pz) as they are of the same symmetry. Similarly, σ*(2s) with σ*(2pz)  can also mix resulting that σ(2s) and σ*(2s) MOs do not retain the pure s character and the σ(2pz) and σ*(2pz) MOs do not retain the pure p character. In fact, all the four MOs acquire a mixed sp character. Due to this s-p mixing, the energies of all the four orbitals change in such a way that the resulting MOs σ(2s) and σ*(2s), which also contain some p character, become more stable and are thus lowered in energy whereas the MOs σ(2pz) and σ*(2pz) which contain some s character also now become less stable and are thus raised in energy. 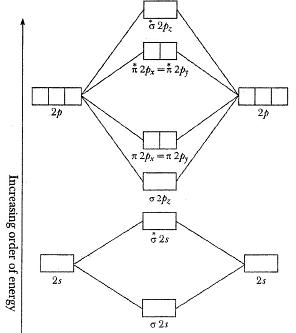 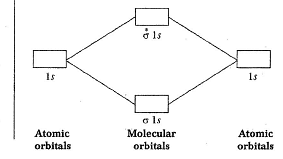 Electron Configurations in MO: (Filling of bonding orbitals in order of increasing energy)

Determination of Magnetism Behaviour: If any molecule has unpaired electron in molecular orbital diagram, then it is paramagnetic. In case of paired electrons the molecule is diamagnetic.

Illustration: Determine the electron configuration and bond order for the following. if it exists, discuss its magnetism. Solution:

Illustration: Determine the electron configuration and bond order for the following. if it exists, discuss its magnetism. Solution: 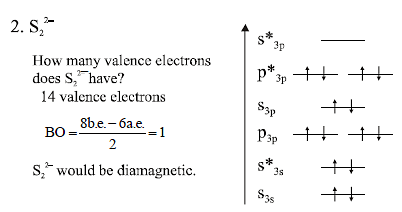 It has 13 electrons therefore its molecular orbital diagram matches to that with Z > 14. 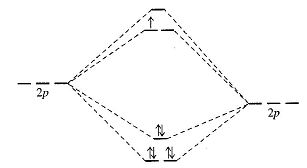 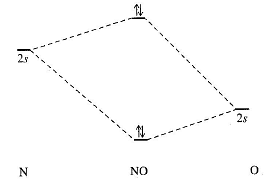 Bond order in NO =

NO+: Removal of an electron from NO gives NO+, nitrosonium ion. The electron is removed from π* antibonding MO to given NO+, which resembles the electronic configuration of CO.Bond order in NO+ =

NO–: In contrast addition of an electron to π* orbital causes a decrease in bond order and an increase in bond length.Bond order in NO– =   ((8-4)/2) = 2Out of NO, NO+ and NO–, NO– has the largest bond and is also paramagnetic. 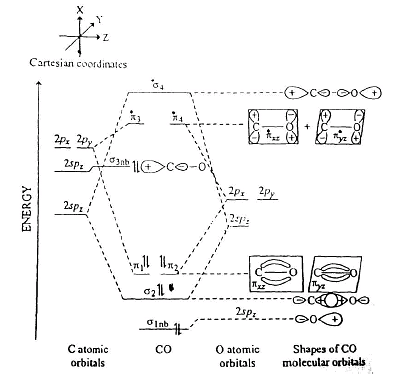 Since the orbital energies are lower for more electronegative O atom compared to the energies of similar orbitals of C atom, the lower energy mixed spz orbital of C atom is comparable in energy to the higher energy spz orbital of O atom, as shown in MOEL diagram of CO. These two atomic orbitals of comparable energy and of same symmetry combine to give s bonding and antibonding molecular orbitals. The lower energy spz, orbital on O and the higher energy sp2 orbital on C atom are so far apart in energy that they hardly influence each other with the result that their energies remain almost unchanged.In other words, these orbitals remain almost non bonding, the non bonding spz orbital on C(σ3nb in the figure) will have more characteristics of 2pz orbital of C atom and the non bonding spz orbital on O atom C(σ3nb in the figure) will have more characteristics of 2s orbital of O atom. The degenerate set of 2px2py orbitals of C and the similar degenerate set of 2px2py orbitals of oxygen are of p symmetry to form a set of degenerate π1,π2 bonding molecular orbitals and another set of degenerate antibonding molecular orbitals. The electronic configuration of CO molecule is, therefore,

and the bond order of CO molecule is obviously 3 (due to two σ bonding and four p bonding) electrons.The electrons in the non bonding orbitals do not contribute towards bonding.Since σ3nb is the highest placed occupied non bonding orbital localised on C atom, its electron pair can easily be donated for forming dative (or coordinate) bond.NOTE: Bond order of CO molecule

Bond order remains same as that of CO as electron is withdrawn from non bonding orbital rather than from anti bonding orbital.Hydrogen Flouride Molecule, HF

The two 2s and 2pz of F, being of the same symmetry, can mix with each other. However, the extent of mixing of 2s and 2pz orbitals will be small because the energy gap between in these two orbitals in high.The 1s orbital of hydrogen atom is more comparable in energy to the higher energy mixed spz orbital (which is practically 2pz orbital) of F. The two combine to give σ1 bonding and σ3* antibonding molecular orbitals. The lower energy mixed spz orbital of F cannot effectively combine with 1s orbital of H atom due to large energy difference between this mixed orbital and 1s orbital of H atom and, therefore, remain almost non bonding (σ2nb) orbital. The molecular orbital energy level diagram of HF is shown in following figure. 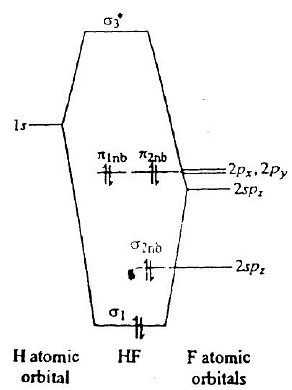 The electronic configuration of HF molecule is thus,

and the bond order is obviously 1 since only two electrons occupy the bonding molecular orbital σ1.

Term symbols are used to designate electronic energy levels which arise out of an electronic configuration because of electrostatic repulsions amongst the electrons of a molecule. These terms are very helpful in understanding electronic spectra of molecules.

The term symbols employed for diatomic molecules are written in the following manner:

2 for an electron in σ, π and δ molecular orbitals, respectively.

(ii) Since all homonuclear diatomic molecules have a centre of symmetry in the middle of their nuclear axis, the overall symmetry to inversion is indicated by u or g and is written as a right subscript of ∑ , π,  Δ.(iii) The electron spin multiplicity in indicated by 2S + 1 as the left superscript of ∑ , π and Δ (S is the total spin of electrons in the system).iv) The term symbol is written as

is also 0. The σ1s molecular orbital is symmetric with respect to the centre of inversion located in the middle of the nuclear axis, Therefore the term symbol for

. The electrons in the filled sigma molecular orbitals and the completely filled degenerate set of pi orbitals contribute nothing to the overall component of angular momentum ML along the nuclear axis. Since both the

molecular orbitals are symmetric with respect to the centre of symmetry of the oxygen molecule, the term symbol will be g × g = g type.Let us first consider the case when both the unpaired electrons in

molecular orbitals have opposite spins. The ml for each electron in

). The term symbols which arise from this situation are 1∑g and 1Δg .Now consider the case when the spins of both the electrons are in the same direction so that 1 1

and the spin multiplicity is 3. Since spins of both the electrons in π* orbitals are in the same direction, their ml values have to be different (Paulis exclusion principle). That is, ml for one electron is +1 and for the other electron it is -1 (The + and - signs indicate whether the component of that the term is 3∑g .Out of 3∑g , 3∑g and 1Δg the first term, i.e., 3∑g , having maximum multiplicity will evidently represent the ground state term of the molecule.Terms for Li2, Be2, N2, F2, F2+ molecules try yourself.The term symbols for heteronuclear diatomic molecules are derived in a similar manner. Since a heteronuclear diatomic molecule has no centre of symmetry, we do not write the subscript g or u in the term symbols of such molecules.The ∑ term are sometimes further codified by writting + or - as a right superscript depending upon whether the system is symmetric or asymmetric with respect to a plane of symmetry passing through the nuclear axis.