The document Short & Long Answer Questions: Aldehydes, Ketones & Carboxylic Acids Notes | Study Chemistry for JEE - JEE is a part of the JEE Course Chemistry for JEE.
All you need of JEE at this link: JEE

Q.1 Although phenoxide ion has more no. of resonating structures than carboxylate ion, even though carboxylic acid is a stronger acid why?

Ans:- The phenoxide ion has non-equivalent resonance structures in which –ve charge is

resonance is more effective and a stronger acid.

Ans. As Carboxylic acid forms a dimer due to which their surface area increases and

forms strong intermolecular H-bonding. It has more boiling point than alcohols.Q.3 Why does solubility decrease with increasing molecular mass in carboxylic acid?Ans. Because of increase in alkyl chain length which is hydrophobic in nature. Hence solubility decreases.Q.4  Why aldehydes are more reactive than ketones when undergo nucleophilic addition reaction?Ans.  a. + I effect:- The alkyl group in Ketones due to their e-releasing character decrease the +ve charge on C-Atom and thus reduce its reactivity.

Q.5  Why PCC cannot oxidise methanol to methanoic acid and while KMNO4 can?

Ans. This is because PCC is a mild oxidising agent and can oxide methanol to methanal

only. While KMNO4 being strong oxidising agent oxidises it to methanoic acid.Q.6  During preparation of esters from a carboxylic acid and an alcohol in the presence of acid catalyst water or ester formed should be removed as soon as it is formed.

Ans. The formation of esters from a carboxylic acid and an alcohol in the presence of acid catelyst in a reversible reaction.R – COOH + R′OH

H2SO4 R – COOR′ + H2OTo shift the equilibrium in forward direction, the water or ester formed should be removed as fast as it is formed.Q.7 Why HCOOH does not give HVZ reaction while CH3COOH does?

Ans. CH3COOH contains α-hydrogens and hence give HVZ reaction but HCOOH does not

contain α-hydrogen and hence does not give HVZ reaction.Q.8 Suggest a reason for the large difference in the boiling point of butanol and butanal although they have same solubility in water. Ans. Because Butanol has strong intermolacular H-bonding while butanal has weak dipole-dipole interaction.However both of them form H-bonds with water and hence are soluble.Q.9 Would you expect benzaldehyde to be more reactive or less reactive in nucleophilic addition reaction than propanol. Explain. Ans. C-atom of Carbonyl group of benzaldehyde is less electrophilic than Catom of Carbonyl group in propanol. Polarity of Carbonyl group is in benzaldehyde reduced due to resonance making it less reactive in nucleophillic addition reactions.

Ans. Methanal undergo Cannizaro’s reaction because it does not possesses α-hydrogen atom.

Q.12  Which acid is stronger and why?

Q.14 Why is the boiling point of an acid anhydride higher than the acid from which it is derived?Ans. Acid anhydrides are bigger in size than corresponding acids. They have more surface area, more Van der Waals force of attraction hence have higher boiling point.  Q.15 Why do Carboxylic acids not give the characteristic reactions of a carbonyl group? Ans. Due to resonance, It doesn’t give the characteristics reactions of carbonyl group. It does not have free

Q.16 Cyclohexanone forms cyanohydrin in good yield but 2,2,6 trimethyle cyclo-hexanone does not. Why?

Ans. In 2,2,6 trimethyl cyclohexaunone there is strearic hinderance of 3 methyl groups, It 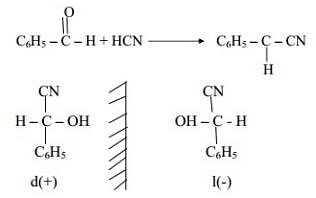 Q.20 Why pH of reaction should be carefully controlled while preparing ammonia derivatives of carbonyl compound? Ans. In strongly acidic medium ammonia derivatives being basic will react with acids and will not react with carbonyl compound. In basic medium, OH will attack carbonyl group.pH of a reaction should be carefully controlled.Q.21 Why formic acid is stronger acid than acetic acid? Ans. Due to +I effect, CH3- group in acetic acid increases e- density on carbon atom which makes it. While in formic acid no such pushing group is present, hence is more stronger acid than acetic acid.Q.22 Why is oxidation of alcohols to get aldehydes carried out under controlled conditions? Ans. It is because aldehydes get further oxidised to acids, oxidation of alcohols to aldehydes needs to be controlled.Q23. Why the oxidation of toluene to benzaldehyde with CrO3 is carried out in the presence of acetic anhydride.

Ans. If acetic anhydride is not used we will get benzoic acid. Acetic anhydride used to prevent oxidation of benzaldehyde to benzoic acid.Q.24 Melting point of an acid with even no. of carbon atoms is higher than those of its neighbour with odd no. of carbon atoms. Ans. They fit into crystal lattice more readily than odd ones that is why they have higher lattice energy and higher melting point.Q.25 Why do aldehydes have lower boiling point than corresponding alcohols? Ans. Alcohols have lower boiling point as they are not associated with intermolecular whereas alcohols are associated with intermoleculer H-bonding. Aldehydes have lower boiling point.Q.26 Why do aldehydes behave like polar compounds?Ans.

Q.27 Most aromatic acids are solids while acetic acid and others of this series are liquids. Explain why?Ans. Aromatic acids have higher molecular weight, More van-der waals force of attraction as compared to aliphalic acids They are solids.Q.28 Ethers possess a dipole moment ever if the alkyl radicals in the molecule are identical. Why? Ans. It is because ethers are bent molecules, dipole do not get cancelled.

Q.29 Why does acyl chlorides have lower Boiling point than corresponding acids?Ans. Acyl chlorides are not associated with intermolecular H-bonding. They have lower boiling point.Q.30 Why ethers are stored in coloured bottles? Ans. They are stored in coloured bottles. In presence of sunlight they react with oxygen to form peroxides which may cause explosion.Q.31 Why formaldehyde cannot be prepared by Rosenmund’s reduction? Ans. Because the formyl chloride thus formed is unstable at room temperature. Cannot be prepared by Rosenmund reduction.

Q.1 Name the reaction and the reagent used for the conversion of acid chlorides to the

Ans. Name : Rosenmund‘s reaction Reagent : H2 in the presence of Pd (supported over

BaSO4 ) and partially poisoned by addition of Sulphur or quinoline.

Q.2 Suggest a reason for the large difference in the boiling points of butanol and butanal, although they have same solubility in water.

Ans. The b.p. of butanol is higher than that of butanal because butanol has strong

intermolecular H-bonding while butanal has weak dipole-dipole interaction. However

both of them form H-bonds with water and hence are soluble.Q.3  What type of aldehydes undergo Cannizaro reaction?

Ans. Aromatic and aliphatic aldehydes which do not contain α- hydrogen.Q.4 Out of acetophenone and benzophenone, which gives iodoform test? Write the reaction involved. (The compound should have CH3CO-group to show the iodoform test.)

Ans. Acetophenone (C6H5COCH3 ) contains the grouping (CH3CO attached to carbon) and hence given iodoform test while benzophenone does not contain this group and hence

does not give iodoform test.

Ans. CH3COOH contains α- hydrogen and hence give HVZ reaction but HCOOH does not

contain α-hydrogen and hence does not give HVZ reaction.Q.8 During preparation of esters from a carboxylic acid and an alcohol in the presence of an acid catalyst, water or the ester formed should be removed as soon as it is formed.

Ans. The formation of esters from a carboxylic acid and an alcohol in the presence of

acid catalyst in a reversible reaction.

To shift the equilibrium in the forward direction, the water or ester formed should be

Ans. The molecular masses of all these compounds are comparable:

CH3CHO (44), CH3CH2OH (46), CH3COCH3(46), CH3CH2CH3 (44).CH3CH2OH exists as associated molecule due to extensive intermolecular hydrogen bonding and hence its boiling point is the highest (351 K). Since dipoledipole interaction are stronger in CH3CHO than in CH3OCH3, hence boiling point of CH3CHO (293 K) is much higher than that of CH3OCH3(249 K). Further, molecules of CH3CH2CH3 have only weak Vander Waals forces while the molecules of CH3OCH3 have little stronger dipole-dipole interactions and hence the boiling point of CH3OCH3 is higher (249 K) than that of CH3CH2CH3 (231 K).Thus the overall increasing order of boiling points is :

ion over CH3COO– ion FCH2COOH is a stronger acid than CH3COOH.Q.3 Which acid is stronger and why?

Ans. Due to interamolecular H-bonding ortho-hydroxy benzaldehyde exists as discrete

molecule whereas due to intermolecular H-bonding, p- hydroxybenzaldehyde exists as

associated molecules. To break these intermolecular H-bonds, a large amount of energy is

needed. Consequently, p-hydroxybenzaldehyde has a much higher m.p. and b.p. than

temperature while p-hydroxy benzaldehyde is a high melting solid.

Q.1 Arrange the following compounds in order of their property as indicated.

Hence, the strengths of the given acids increase as:

The document Short & Long Answer Questions: Aldehydes, Ketones & Carboxylic Acids Notes | Study Chemistry for JEE - JEE is a part of the JEE Course Chemistry for JEE.
All you need of JEE at this link: JEE