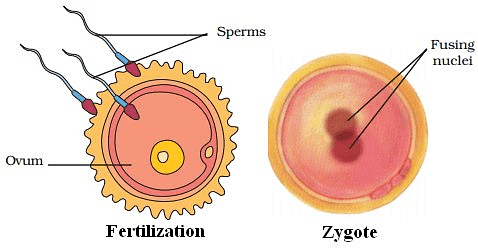 Ans: Fertilization done by doctors, outside the body, is called In-vitro fertilization?Q6: How do the hundreds of egg of frog remain protected even if laid on open aquatic system?

Ans: A layer of Jelly holds the eggs together and provides them protection.Q7: What is External fertilization?

Ans: Zygote: Single fertilizes egg and found in oviducts.Embryo: Ball of cells and gets embedded in the wall of uterus for development.Q10: Define Embryo.

Ans: Zygote divides repeatedly to give ball of cell called Embryo.Q11: What is Foetus?

Ans: The stage of embryo in which all body part can be identified is a Foetus. When the development of foetus is complete, the mother gives birth to the baby.Q12: What is the basic difference between reproduction mechanism in human being and hen?

Ans: Human being gives birth to baby, they are viviparous whereas hen lays egg and they are oviparous.Q13: Why do frogs and fish lay eggs in hundred, whereas a hen lays only one egg at a time?

Ans: Organisms having internal fertilization like hen, produce one egg at a time. This is so because here there is less chance of failure of fusion between male and female gamete. After the gametes are fertilized there is just the need of development of animal in the form of egg.Frog like aquatic organisms who shows external mode of reproduction have to lay egg in hundred. The first reason behind this is the single egg is so small in size that it will not be possible to stay to definite position and which in turns make hard for sperm to found and fuse them. Whereas, when large number of eggs make them stick together this makes fertilization possible. Another reason behind this is there is a lot of organisms who feed on these eggs, so larger number of eggs gives more possibility of giving birth to young onesQ14: What is Viviparous animal?

Ans: The animals which give birth to young one are called Viviparous animal. Like cow, dog etc.Q15: Explain Metamorphosis.

Q17: Differentiate between zygote and foetus.

Q19: Name some animals in which young ones are different from adult.

Ans: Silkworm and Frog have young ones different from adult.Q20: Define asexual mode of reproduction.

Ans: No, there is another mode of asexual reproduction apart from Budding, which is Binary fission.Q22: Define Binary fission and give name of at least one organism following it.

Ans: The mode of asexual reproduction in which an animal reproduce itself by dividing into two individual is called Binary fission. Amoeba follows this mode for its reproduction.

Ans: In Budding new organism develops from bud, whereas, in Binary fission organism reproduce by dividing itself into two.Q24: Explain how chicks are born.

Ans: Chickens are not actually born, they are hatched from eggs. A chicken will ovulate and lay an egg within 24 hours. The chicken will continue to lay eggs every 24-36 hours. After eggs are layed, it takes about 3 weeks for them to hatch.Q25: Name different stages of the lifecycle of a frog and silkworm.

Q30. What is sperm? Explain its structure.Ans. Sperm is a male reproductive cell. It is also called male gamete. There are mainly three parts of sperm:(i) Head(ii) Middle piece and(iii) A long tail.Indeed each sperm is a single cell with all the usual cell components.

Q31. What are the female reproductive organs?Ans. The female reproductive organs are a pair of ovaries, oviducts (fallopian tubes) and a uterus. The ovary produces female gametes called ova or eggs. In human beings only one matured egg is released into oviduct by one of the ovaries every month. The development of baby takes place in uterus.Q32. What is ovum? Explain its structure.Ans. The female reproductive cell is called egg or ovum (plural ova). It is produced by ovaries. Like sperm, ovum is also a single cell and contains nucleus and other usual components.Q33. What do you understand about test-tube baby?Ans. Some women are unable to bear babies because sperms cannot reach the egg for fertilisation. In such cases, doctors collect freshly released egg and sperm and keep them together for few hours for IVF or in vitro fertilisation. In case fertilisation occurs the zygote is allowed to develop for a week and then it is placed in the mother’s uterus. Complete development takes place in the uterus and the baby is born like any other baby. Babies born through this technique are called test-tube babies.Q34. Why is it necessary to produce large number of eggs and sperms by the animals which reproduce by external fertilisation?Ans. The animals in which external fertilisation takes place produces a large number of eggs sperms. This is because the eggs and sperms get exposed to water movement, wind and rainfall. There are some other animals that may feed on eggs in the pond. Thus, production of large number of eggs and sperms is necessary to ensure fertilisation of at least a few of them.Q35. How do chicks born in hens?Ans. After fertilisation the zygote divides repeatedly and travels down the oviduct. As it travels down, many protective layers are formed around it. The hard shell on the hen’s egg is one such protective layer. The hen finally lays egg. The embryo takes about three weeks  to develop into a chick. After the chick is completely developed it bursts open the egg shell.Q36. Explain the terms viviparous and oviparous with examples.Ans. Viviparous: The animals which give birth to young ones are called viviparous animals. For example: cat, dog, cow and human beings.Oviparous: The animals which lay eggs are called oviparous animals. In such animals development of embryo take place outside the female body. For example: All birds and reptiles.Q37. Explain the life-cycle of silkworm in brief.Ans. In silkworm, the young ones may look very different from the adults. We can write the life-cycle of a silkworm as follows:

The caterpillar or pupa of silkworm looks very different from the adult moth.

Q38. Explain the life-cycle of a frog. Ans. There are three main stages in the life-cycle of a frog: (i) Egg (ii) Tadpole (larva) (iii) Adult. Tadpoles look different from the adults. After some time, these tadpoles are converted into adult frog.Q39. Explain the asexual reproduction in hydra with diagram. Ans. In hydra, reproduction takes place by budding. A part of the organism starts bulging out. Slowly it grows and develops into a separate individual.

Q41. Explain the asexual reproduction in amoeba. Ans. The reproduction in amoeba takes place by binary fission. In this process amoeba reproduces by dividing into two individuals. The nucleus of amoeba cell is divided into two. This is followed by division of its body into two, each part receiving a nucleus. Finally two amoebae are produced from one parent amoeba. 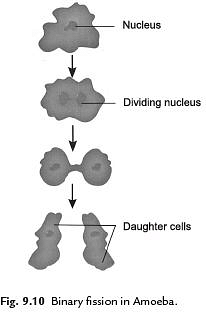 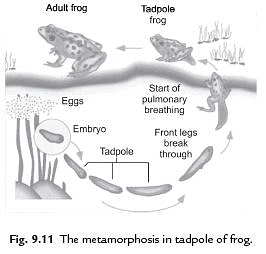 The document Short Answer Question - Reproduction in Animals Notes | Study Science Class 8 - Class 8 is a part of the Class 8 Course Science Class 8.
All you need of Class 8 at this link: Class 8
Join Course