The document Short Answer Questions (Part - 2) - Sound Notes | EduRev is a part of the Class 8 Course Science Class 8.
All you need of Class 8 at this link: Class 8

Q31: What is the difference between noise and music, can music become noise sometimes?

a. Reverberation of sound

Ans: The persistence of sound due to repeated reflection and its gradual fading away is known as reverberation of sound.

Echo: Echo is defined as a repetition of sound due to the reflection of original sound by a large and hard obstacle.Q33: What is the intensity of sound?

Ans: The amount of sound energy passing each second through unit area is called the intensity of sound.

Q34: How is sound produced?Ans. The vibrating bodies produce the sound. When a body vibrates, sound is produced. If vibrations are stopped the sound is not produced any more. 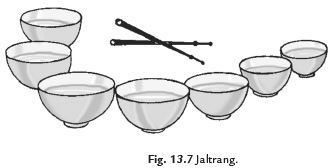 Q40: Name the organ in human that produces sound. How does it work?Ans. In humans, the sound is produced by the voice box or larynx. The voice box has two vocal cords stretched across it, in such a way that it leaves a slit for the passage of air. When the lungs force air through slit, the vocal cords vibrate to produce sound. Q41: Prove that sound needs a medium for propagation.Ans. Take a metal glass tumbler. Place a cellphone in it. Ask your friend to give ring on this cellphone. Listen to the ring carefully. Now surround the rim of the tumbler with your hands. Put your mouth on opening between your hands. Indicate to your friend to give a ring again. Listen the ring while sucking air from the tumbler. The sound become very less. This activity shows that sound requires a medium to propagate. Q42: What do you mean by vacuum? What happens to the loudness of sound in vacuum?Ans. The decreasing amount of air causes decrease in the loudness of sound. When air is removed completely from a vessel, it is said that there is a vacuum. If all the air is sucked from the vessel, the sound would stop completely. The sound cannot travel through a vacuum.Q43: Prove that sound can travel through the liquids.Ans. Take a bucket, fill it with clean water. Take a small bell in one hand. Shake the bell inside the water to produce sound. Place your ear gently on the water surface. You can hear the sound. It indicates that sound can travel through liquids. 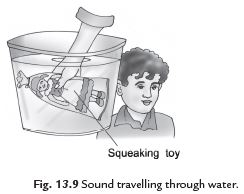 Q44: Prove that sound can travel through solids also.Ans. Take a long metal rod or a metre scale and hold its one end to your ear. Ask your friend to gently scratch or tap at the other end of the metal rod. You can hear the sound. The sound reaches your ear through the solid rod. The other friends cannot hear the sound because sound is very low. This activity shows that sound travels in solids also. 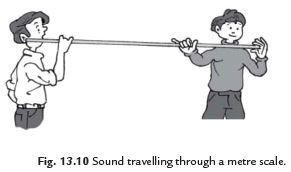 Q45: How do human being hear the sounds?Ans. The hearing organs in humans are ears. Ears have a stretched structure called eardrum. When ears receive sound, it enters down the ear canal and reach eardrum. Vibrations of sound vibrate the eardrum and it sends vibrations to inner ear from which vibrations are sent to brain for interpretation of sound. 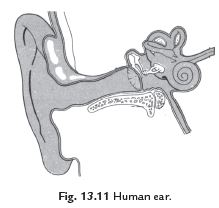 Q47: What is frequency? How does it affect the quality of sound?Ans. The number of oscillations per second is called frequency. Its unit is hertz. A frequency of 1 Hz is one oscillation per second. The frequency determines the shrillness of sound. It is also called pitch of sound. The high frequency makes the pitch high and if the pitch is low, the frequency is less.

Q48: What are the two important properties of sound?Ans. (i) Amplitude: It is the maximum displacement from the mean position of an oscillatory body. It controls the loudness of a sound. More the amplitude, more loud the sound is.(ii) Frequency: The Number of oscillations in one second is called frequency. It controls the pitch of the sounds. High pitched sound means high frequency. The unit of frequency is hertz.Q49: What do you mean by noise and musical sound? Ans. Noise: T he unpleasant sounds are called noise. It is unwanted sound. It is harmful to our ears. Musical sound: The sound which produces pleasant sensations is called musical sound. It is produced by various musical instruments.