The document Short Answer Type Questions: The Little Girl Notes | Study English Class 9 - Class 9 is a part of the Class 9 Course English Class 9.
All you need of Class 9 at this link: Class 9

Q1. What was the name of the little girl?

Her name was Kezia. 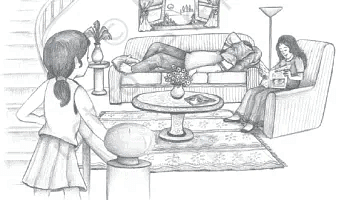 Q2. To the little girl who was a figure to be feared and avoided?

To the little girl, her father was a figure to be feared and avoided.

Q3. How did the little girl feel when her father left for the office in the morning?

Q4. What was the little girl’s fault when she appeared before her father?

Before her father, she stuttered badly.

Q5. What did Kezia always find her father and mother doing on Sunday afternoons?

She always found her mother reading and her father stretched out on the sofa.

Q6. On what occasion did Kezia’s grandmother ask her to present a gift to her father?

She asked Kezia to present a gift to her father on the occasion of his birthday.

Q7. What gift did Kezia prepare for her father?

She prepared a pin-cushion for her father.

Q8. What did Kezia stuff the pin-cushion with?

She stuffed the pin-cushion with the paper on which her father’s important speech was written.

They were Kezia’s next-door neighbour.

Q10. How many children did Mr. Macdonald have?

He had five children.

Q11. How many brothers and sisters did Kezia have?

Kezia had no brothers or sisters, she was the only child of her parents.

Q12. Why was there hue and cry on the loss of the papers in the house?

There was so much hue and cry in the house on the loss of the papers because the father’s great speech for the Port Authority was written in them.

Q13. Why was Kezia left alone one night with her father?

Kezia’s mother was ill and the grandmother went with her to the hospital.

Alice was the cook in Kezia’s house.

Q15. What was Kezia’s nightmare?

Kezia saw a butcher with a knife in her nightmare.

Q16. Name the writer of the lesson ‘The Little Girl’

Q17. Why was Kezia afraid of her father?

Q18. Who were the people in Kezia’s family?

Kezia’s family had four people in all. Her very strict father, her stern mother, her soft-hearted grandmother and little Kezia herself.

Q19. What was Kezia’s father’s routine before going to an office and after coming back in the evening?

Q20. What would Kezia’s mother ask her to do when Father returned from office?

Q21. Why did Kezia go slowly towards the drawing-room when the mother asked her to come downstairs?

Q23. Why did Kezia stutter in the presence of Father?

Q24. Why did Kezia feel that her father was like a giant?

Q26. What was Kezia’s father’s routine on Sundays?

Q27. What would Kezia do while her father slept on Sundays? What happened when he woke up?

Q28. What did Grandmother ask Kezia to make and why?

Q29. What did Kezia make as a birthday gift for her father? How did she prepare it?

Q30. Why was there a hue and cry in Kezia’s house at night before her father’s birthday?

Q31. Why was Kezia dragged down to the dining room at night?

Kezia was dragged down to the dining room at night to be brought in front of her father who was extremely angry as she had in the papers that had his great speech for the Port Authority.

Q32. Why did Father come to Kezia’s room with a ruler?

Q33. Kezia’s efforts to please her father resulted in displeasing him very much. How did this happen?

Q34. Do you think Kezia was wrong in tearing the papers of her father? What does it show about her character?

Q35. How and why did Grandmother comfort Kezia after her father hit her with a ruler?

Q37. Why did Grandmother tell Kezia that her father was too Upset that night to listen to her?

Q38. How did Father punish Kezia? What was the impact of this punishment?

Q39. Who were Kezia’s neighbours? What did she observe about them?

Q40. Kezia felt that Mr. Macdonald was a better father as compared to her own father. Why?

Q41. Why was Kezia left alone in the house with the cook Alice?

Q42. Why did Kezia suddenly grow afraid when Alice put her to bed?ORWhat did Kezia tell Alice, the cook, about her fear?

Q43. What kind of dreams did Kezia usually have?

Q44. How did Father comfort the little girl, Kezia, when she got scared in her sleep?

Q45. When and how does Kezia’s view of her father undergo a change?

Q46. How did Kezia feel when her father beat her?

Q47. Why was Kezia afraid of her father?

Q48. How did Kezia’s birthday present for her father proves to be a disaster for her?

Q49. What was the morning routine of Kezia and her father?

Q50. Why was Kezia punished by her father?

Q51. Kezia’s efforts to please her father resulted in displeasing him very much. How did this happen?

Q52. What kind of father was Mr. Macdonald, and how was he different from Kezia’s father?

Q53. Give in brief the message of the story ‘The Little Girl’.

Q54. Why was a hue and cry in the house? Why did her father punish Kezia?

Q55. Why did Kezia always stutter while talking to her father?

Q56. How did Kezia make a pin-cushion for her father?

Q57. In what ways did Kezia’s grandmother encourage her to get to know her father better?

On Sunday afternoons, Kezia’s grandmother sent her to her father’s room to have a nice talk with him. Besides, she asked her to make a gift of a pin-cushion on her father’s birthday.

Q58. Why was Kezia’s father to be feared and avoided? What did she think of him?

Q59. How did Kezia feel when her father left for office and why?

The document Short Answer Type Questions: The Little Girl Notes | Study English Class 9 - Class 9 is a part of the Class 9 Course English Class 9.
All you need of Class 9 at this link: Class 9