The document Short Answers - Force and Pressure, Science, Class 8 Class 8 Notes | EduRev is a part of the Class 8 Course Class 8 Science by VP Classes.
All you need of Class 8 at this link: Class 8

Q. 1. What is a force? Explain with the help of some examples.
Ans. Force is a pull or push of the objects. The action like, pushing, pulling, picking, hitting, lifting, running and bending are the examples of force. Moving or stopping of a body, changing shape and direction of motion of objects are various actions which show force in play.

Q. 2. How do we feel force in our daily life?
Ans. Various big or small actions make us feel the force. We hit or catch many objects in our daily life. We see that a moving ball stops on its own. The ball changes the direction of its motion when it is hit with a bat. We make lassi etc. by churning of curd. These are many actions which help us to feel that a force is exerted.

Q. 3. Explain that forces are due to an interaction between objects.
Ans. Imagine, a man is standing behind a stationary car. The car does not move due to his presence. 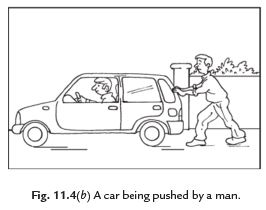 Now allow the man to push the car, it means he applies a force on the car. The car may begin to move in the direction of the applied force. Note that the man has to push the car to make it move. This example shows that at least two objects must interact with each other for a force to come into play. 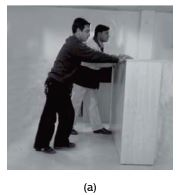 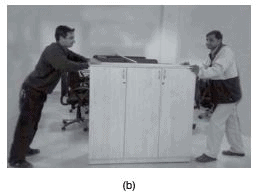 Fig. 11.5 Two friends pushing a heavy load (a) in the same direction, (b) in opposite directions.

(i) Magnitude: The strength of force is usually expressed by its magnitude.

Q. 6. What are the effects of force?
Ans. A force changes or try to change the
(i) Speed of a moving body.
(ii) Direction of motion of a body.
(iii) Shape of a body.

Q. 8. How can a force change the states of motion?
Ans. There are two states of an object:

Q . 16. We observe that the wheels of buses and trucks are heavier than the wheels of cars or scooters. Why?
Ans. The buses and trucks are heavy and require to exert less pressure. We know that pressure decreases as area of contact increases, so the tyres are broadened so that they exert less pressure on earth and move easily. If they exert more pressure, they will sink in earth. The scooters and cars have less wide wheels because they need more pressure for gripping.