The document Short Notes - Crop Production and Management Class 8 Notes | EduRev is a part of the Class 8 Course Class 8 Science by VP Classes.
All you need of Class 8 at this link: Class 8

AgricultureThe applied branch of biology which deals with cultivation of plants and rearing of animals is called agriculture. Generally, the art or practice of cultivating land is referred as agriculture.

CropWhen plants of the same kind are grown and cultivated at one place on a large scale is called as a crop. All activities which farmers do for the cultivation of plants are called agricultural practices.

For doing various activities, a farmer needs different types of tools. These tools which are involved in cultivation of plants are called agricultural implements.

(i) Preparation of soil

Implements used for traditional ways of irrigation: (i) Moat(ii) Dhekli(iii) Rahat(iv) Chain pump and(v) Motor pumpsBASIC PRACTICES OF CROP PRODUCTION(a) Preparation of SoilBefore sowing the crop seeds, the soil of fields is loosened and overturned. This process is called ploughing or tilling. Ploughing causes ventilation of soil and makes it suitable for the growth of small organisms living in it.Plough: A large farming implement with one or more blades fixed in a frame, used to turn over and cut furrows in soil, is called plough. Plough may be made of only wood, wood and iron, and of iron only.Ploughshare: The main cutting blade of a plough. Hoe: A tool which is used for removing weeds and for loosening the soil.Cultivator: Nowadays ploughing is done by a tractor driven cultivator. The use of cultivator saves labour and time. (b) Sowing of SeedsFor sowing, farmers obtain certified seeds from State Agriculture Department and Seed Corporation. Sometimes, farmers also select seeds from their own crop. For selection of seeds of most of the crops, seeds are put into a bucket of water. The seeds which float on water are rejected. These seeds are defective.The seeds which remain submerged in water are selected for sowing. The selected seeds are treated with chemicals such as agrosan or ceresan. This chemical treatment protects seedling from seed-borne diseases.Seeds are sown either by hand-broadcasting (spreading) or by seed drills. A type of seed drill, commonly used, is a long iron pipe having a funnel at the top. It is tied at the back of the plough. A farmer does ploughing and simultaneously releases seeds from the funnel. Seeds thus released pass through iron pipe to the soil furrows which are formed by the plough. 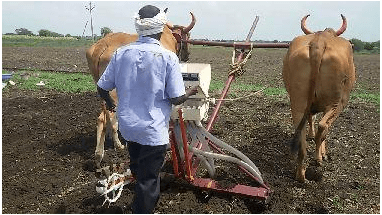 For example: a particular crop takes more phosphate.If this crop is grown in a field every year, the soil will become deficient in phosphorus nutrient. This type of deficiency of a particular nutrient is made up by adding chemical substances called fertilizers.

(d) IrrigationThe supply of water to crops at different intervals is called irrigation. The time and frequency of irrigation varies from crop to crop, soil to soil and season to season. Methods of IrrigationTraditional methods:1. Moat (pulley-system)2. Chain pump3. Dhekli4. Rahat 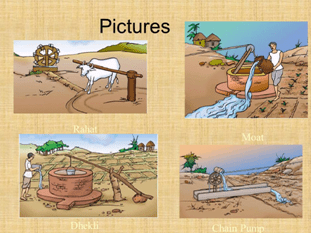 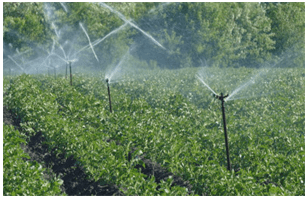 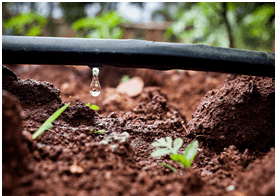 (e) Protection from WeedsThe unwanted plants in the fields are called weeds. Seeds of these weeds spread through the agencies like air, water, birds and other animals. Weeds share water, sunlight, space, nutrients with the crop plants.Thus they compete with the crop plants. Therefore, their removal is necessary. Otherwise, crop plants do not get sufficient space, water, sunlight and nutrient to grow healthier. Weeds are weeded out either by hand or with the help of an implement called harrow. Nowadays, for checking the growth of weeds, certain chemicals are used. These chemicals are called weedicides, such as 2, 4-D. 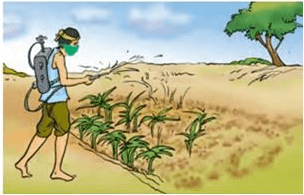 (f) Harvesting and ThreshingWhen crops get matured, they usually turn yellow or golden or brown. This is the time when crops should be cut. Cutting of crops is known as harvesting. Harvesting is either done manually by a sickle or by a machine called harvester. 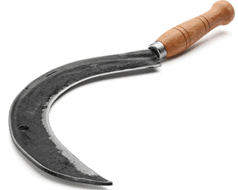 Harvested crop is further dried and then animals such as bullocks, buffaloes, camels are made to walk over it. The grains are separated from chaff with the help of wind (winnowing). The whole process of separation of the grains from the harvested crop is known as threshing. Big farmers use huge machines known as combines which do both harvesting and threshing.Special festivals associated with the harvest seasons are: Pongal, Baisakhi, Holi, Diwali, Nabanya and Bihu.

(g) StorageGrains obtained by threshing are dried in the open. The dried grains are stored in gunny bags, and placed in properly ventilated cemented halls, known as godowns. Farmers keep dried grains in jute bags or metallic bins or mud bins. Storage of Grains in Silos

Large scale storage of grains is done in silos and granaries. For storing large quantities of grains in big godowns, specific chemical treatments are used to protect them from pests and microorganisms. 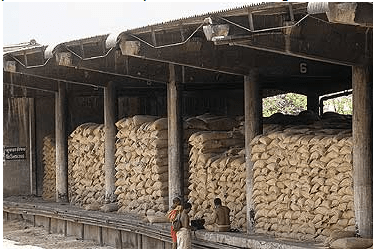 (h) Food from AnimalsFood is also obtained from animals for which animals are reared and provided with proper food, shelter and care. When done on a large scale, it is called animal husbandry. 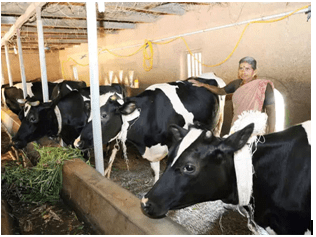