The document Short Notes - Getting to Know Plants Class 6 Notes | EduRev is a part of the Class 6 Course Science Class 6.
All you need of Class 6 at this link: Class 6

Herbs; A herb is a non-woody plant that has green and tender stems with few branches and is usually short. Herbs have a variety of uses including adding flavor to food, providing medicine for diseases and in some cases even adding a spiritual touch.

Shrubs are taller than herbs and have stems branching out from the base. The stems of shrubs are hard not but thick. A common place where shrubs are grown is known as shrubbery.Tree: A tree is a woody plant that has many branches on a single stem. Trees benefit us by preventing soil erosion, maintaining the carbon dioxide content in the air and in building huts and making furniture. Trees are categorized based on their height, width of their trunk, their overall size, and of course their age.

Creepers are plants with weak stems and hence cannot stand straight. They grow on the ground. Creepers have a tendency to develop new plants on their own. A few creepers could cause allergies or skin problems if touched.

Climbers are plants that need support from other structures to grow and spread. Climbers can either move horizontally or vertically unlike creepers that move only horizontally. Climbers attracts insects and reptiles because of their brightly coloured flowers and fragrance.Parts of a Plant: The different parts of a plant are the roots, stem, leaves, flowers and fruits.The roots of a plant are mostly seen underground and look brown in colour.The tiny thread-like structures over the roots are the root hair. The tip of the root is called the root cap.Roots are of two types - tap root and fibrous roots.Some plants have a primary root that grows more or less straight down into the soil, and is tapered towards the end. This main root is called the tap root.There are many smaller roots that branch out from the tap root, called lateral roots.Examples of plants with tap roots are hibiscus, carrot, turnip and sunflower.Some plants have many lateral roots that start from the base of the stem.These are called fibrous roots. Examples of plants with fibrous roots are banana, grass and onion.The roots hold the plant firmly in the soil, thereby serving as an anchor to the plant.

One of the main functions of the roots is to absorb water and nutrients from the soil for the growth of the plant. Sometimes they also store sugars and carbohydrates.The stem holds the leaves, flowers and fruits in a plant.The vascular tissue inside the stem helps to transport water and nutrients from the roots to the leaves, and food from the leaves to the roots.Plants release excess water in the form of water vapour through minute openings in the leaves, called the stomata. This process is known as transpiration.The different parts of a flower include sepals, petals, stamen and pistil.The green leaf-like parts surrounding the bud are called the sepals.The brightly coloured parts of a flower are called the petals.The male part of a flower is called the stamen, and the female part is called the pistil.The male and female parts of a flower are involved in the formation of fruit in a process called fertilization.

Parts of a Flower: 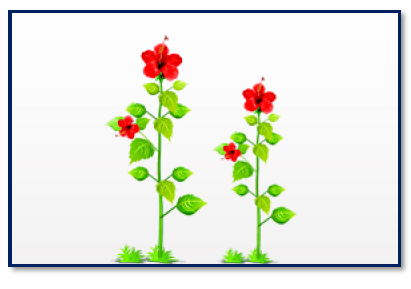 The flower is the reproductive part of a plant. The parts of a flower include sepals, petals, stamen and pistil.

The hard, leaf-like structures around the base of a flower are called its sepals.

They protect the bud before it blooms into a flower. The sepals are collectively called the calyx. The number of sepals varies from plant to plant.

The brightly coloured portions of a flower that attract insects and birds for pollination are called petals. Like sepals, the number of petals also varies from plant to plant. The petals are collectively called the corolla.
In some flowers, the petals and sepals combine to form a round shape, which is called the tepal.
The stamens and the pistil are the reproductive parts of a flower. The stamen is the male reproductive part of a flower.

Like sepals and petals, every flowering plant differs in the number of stamens, too. The female reproductive part of a flower is the pistil.