The document Short Notes - Work and Energy Class 9 Notes | EduRev is a part of the Class 9 Course Class 9 Science by VP Classes.
All you need of Class 9 at this link: Class 9

(Case II) If displacement is perpendicular to the force, work done is zero.

Kinetic energy of body moving with a certain velocity = work done on it to make it acquire that velocity.

The energy possessed by such an object is called the gravitational potential energy.∴ GPE = work done in raising a body from the ground to a point against gravity.

Consider a body with mass m, raised through a height h, from the ground, Force required to raise the object = weight of object mg.

Work done in both the cases (i) and (ii) is same as a body is raised from position A to B, even if the path taken is different but the height attained is the same. 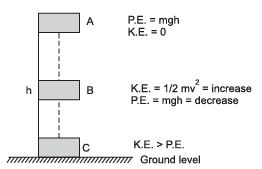 This shows the continual transformation of gravitational potential energy into kinetic energy.

The energy used in one hour at the rate of 1kW is called 1kWh.