Q. 1. Which line of latitude passes through the centre of India ?Ans. Tropic of Cancer 23½° N.

Q. 6. Which is the largest state of India (Area) ?Ans. Rajasthan.

Q. 8. Which is the smallest Union Territory in India ?Ans. Lakshadweep.

Q. 9. Which state of India is surrounded by boundaries of five states ?Ans. Madhya Pradesh and Karnataka.

Q. 15. Between which latitudes and longitudes the Indian sub-continent lie ?Ans. Between 8°N to 37°N latitude and 68°E to 97°E longitudes.

Q. 16. Name the State in India through which the Standard Meridian of India, as well as the Tropic of Cancer, pass covering the longest distance.Ans. Madhya Pradesh.

Q. 19. What is a sub-continent ? Explain this with reference to countries lying south of the Himalayan Mountain System in South Central Asia.Ans. Sub-continent : A sub-continent is a vast independent geographical unit.  This land mass is distinctly  separated from the main continent. The vastness in size  produces a diversity in economic, social and cultural  conditions. India is a vast country. It is often  described as ‘Indian sub-continent’.
Countries : The Himalayan mountain system acts as a physical barrier separating the Indian subcontinent from the main land of Asia. India, Pakistan, Bangladesh, Nepal and Bhutan, Maldives, Sri Lanka combine together to form a sub-continent. The great mountain wall isolates these countries from Asia.
These are also called ‘SAARC’ countries. 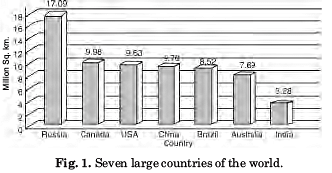 Q. 22. State the passes in N.W. part of India and explain their importance.Ans. The only way people from outside could get into India were the Khyber Pass, near Safed Koh, and the Hindu Kush mountains and the Bolan pass between the Sulaiman and the Kirthar ranges in the north-west that separated the Indian realm from Afghanistan. It is through these routes that earlier central and west Asian tribes came to India, and later armies of Alexander, Afghan and Persians entered India.

Q. 23. Name the important passes across the lofty Himalayan mountains of the Indian subcontinent.Ans. The Himalayas act as a physical barrier in the north. There are many passes to cross these lofty mountains such as :
(i) Shipkila pass (along Indo-Tibet Road).
(ii) Karakoram pass (Kashmir).
(iii) Nathula pass (Sikkim).
(iv) Jelep-la-pass (Sikkim).

Q. 24. Describe the land and water frontiers of India.Ans. Land and Water Frontiers. India has a land border in the North, North-West and North-East. It is 15,200 kilometres in length. Indian Ocean forms the water frontiers of India. India has a long coastline of 7516 kilometres.
(i) The Northern Border. The great mountain wall in the North is a natural boundary. The high Himalayas form a natural bulwork between China, Tibet and India. These high mountains form the dividing line between India and China. It is known as McMohan line.
(ii) The Western Border. In the west, the border between Pakistan and India runs across Rajasthan (Thar desert) and Punjab Plains along Sutlej and Ravi rivers, J & K, Gujarat States.
(iii) The Eastern Border. In the East, a series of mountain ranges separate India from  Burma (Myanmar). The Ganges delta forms the boundary between India and Bangladesh. Bangladesh is bounded by India on three sides and Bay of Bengal on the fourth Assam, Meghalaya, Tripura, Mizoram and West Bengal are States.
(iv) The Southern Border, Arabian Sea in the west. The Indian ocean in the south, and Bay of Bengal in the east form the water frontiers of India. A narrow stretch of water known as Palk strait and Gulf of Mannar separate Sri Lanka from India.

Q. 26. What is the McMohan Line ? What does it signify ?Ans. McMohan line is the dividing line between India and China. It lies to the east of Bhutan. It extends from Kashmir to Arunachal Pradesh. Beyond it, lies the area of Sinkiang and Tibet. It runs along the crest of the high Himalayas. To the north of this line, lies Tibet. This boundary line runs through a complex mountainous terrain. At its eastern point Myanmar, China and India meet each other. The crests along this form a natural boundary which acts as a watershed and is historically determined.

Q. 27. Elaborate the statement, “India is neither a pigmy nor a giant.” Ans. India is a vast country covering a fairly large area of the globe. India ranks seventh in the world with an area of 3.2 million kms, about 2.4% of the total world area. Many countries are far larger in size than India. Russia is about seven times as large as India and the U.S.A. about thrice as big. Thus India is not a giant country like U.S.A. and Russia. But India is not a small country like Sri Lanka, Japan, etc. India is thirteen times as large as Britain and nine times as large as Japan. Thus it is true to say that India is neither a pigmy nor a giant.