The document Short Question and Answers - The Road Not Taken Notes | Study English Class 9 - Class 9 is a part of the Class 9 Course English Class 9.
All you need of Class 9 at this link: Class 9 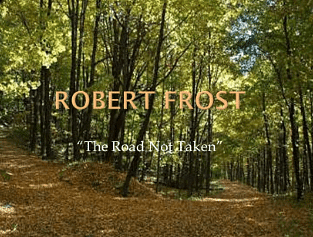 Read the following extract and answer the questions given below.

1. And both that morning equally lay In leaves, no step had trodden black Oh, I kept the first for another day! Yet knowing how way leads on to way, I doubted if I should ever come back.

(a) What decision does the speaker take of the ‘first’ road?

Ans. When the poet sees two roads diverging in a forest, he decides to take the second one and leave the first one for some other day.

Ans. It means that the leaves on the other road were intact. There were no marks that anyone had trodden on them.

(c) What doubt crops up in the speaker’s mind?

Ans. The poet was in a dilemma as to which road, out of the two, he should follow.

2. Two roads diverged in a yellow wood And sorry I could not travel both And be one traveller long I stood And looked down one as far as I could To where it bent in the undergrowth

(a) Why did the poet feel like travelling both the roads?

Ans. He wanted to do so because both the roads looked equally fair and promising.

(b) Why did the poet choose the other road?

Ans. He chose the other road because it was grassy, less travelled and wanted wear.

(c) What was the doubt in the poet’s mind?

Ans. The poet doubted if he would ever be able to come back to travel the first road.

Q1. Discuss the significance of the title ‘The Road Not Taken’.

Q2. Describe the two roads that the author finds. Which road does he choose? [CBSE 2010 (Term I)]

One day the poet comes to a bifurcation in the road and needs to decide which road he should take to continue his journey. One road was a beaten track. Many people hadwalked on it. It was lost in the small shrubs. The other road was grassy and seemed less trodden. Being adventurous in nature, the poet chooses the second road which was grassy and less walked on and left the first one for some other day.

The poet faces a dilemma that every man faces in his life, i.e. making the right decision. One day during the walk the poet reached bifurcation in the road. Out of the two roads, he had to take only one. He decides to take the second road which was less frequented. Hence the road is a symbol of the choice. It is just not possible to make more than one choice and to take both the roads. So the poet decides to take the road less travelled.

Once the poet had to make a decision as to which road he should travel out of two in front of him. He examines both the roads and finds the other road less travelled. Hedidn’t want to follow a beaten track and decides to take the other road and keep the first road for some other day. But somewhere in his mind, he is troubled with the thoughtthat he may not be able to do so.

What does the choice made by the poet indicate about his personality in the poem ‘The Road Not Taken’?

This line reveals the adventurous nature of the poet because when he had to take a decision of making a choice, he did not take the beaten track. He chooses the path which is not frequented. He decides to leave the first road for some other day knowing fully well that he will not get a chance to go back to it.

Robert Frost is known for writing poetry which had philosophical streaks. The poem ‘The Road Not Taken’ is based on the theme of making a difficult choice which has a universal appeal. It concerns making the right choice, the right decision. The road is a symbolic word which stands for a choice. It is just not possible to make more than one choice and to take both the roads. We have to make one choice, we have to take one road. While making our choice we do consider all the factors it is not still foolproof. So the element of regret remains which takes away our contentment. This is the great tragedy of life.

Q7. Why did the poet doubt his coming back on the same intersection in life? [CBSE 2010 (Term I)]

This poem is about choices, decisions and their consequences. It is a fact that once the choice has been made, there is no going back. The traveller standing on the roadof life, is confronted with a dilemma when both the paths or choices look equally promising. Once a road is chosen, the traveller has to move on. There is no rewinding. Therewould never be a befitting time or opportunity for coming back and exercising the choice again. Time has changed, so has the psychology of the traveller. It will never be the same again. So one stick to the road one has taken and makes it lead to the destination already decided.

The document Short Question and Answers - The Road Not Taken Notes | Study English Class 9 - Class 9 is a part of the Class 9 Course English Class 9.
All you need of Class 9 at this link: Class 9