Q1. What was Franz expected to be prepared with for school that day?

Ans: Franz was expected to be prepared with participles that day for school, as Mr. Hamel had said that he would question them on participles.

Q2. Why was Franz tempted to play truant from school?

Ans: The French teacher M Hamel was going to ask questions on participles that Franz had not prepared. To avoid being scolded, he was tempted to play truant from school and spend the day outdoors in a pleasurable manner.

Q3. What was unusual about the school that Franz noticed when he entered the school?

Ans: On entering the school, Franz noticed that there was unusual silence. There was no noise of opening and closing of desks. The village elders had occupied the last benches that were always empty. M Hamel was in his very fine Sunday clothes. Everybody looked sad.

Q4. What had been put up on the bulletin board?

Ans: Franz had a negative view of the bulletin board as for the last two years, only bad news had come from it. That day was no exception, as Germans had put up an order passed from Berlin on the bulletin board to teach only German in the school of Alsace and Lorraine.

Q5. What changes did the order from Berlin cause in school that day?

Q6. How did Franz’s feelings about M Hamel and school change?

Q7. What reasons did M Hamel give for their lack of interest in learning French?

Ans: The lack of interest in learning French was: 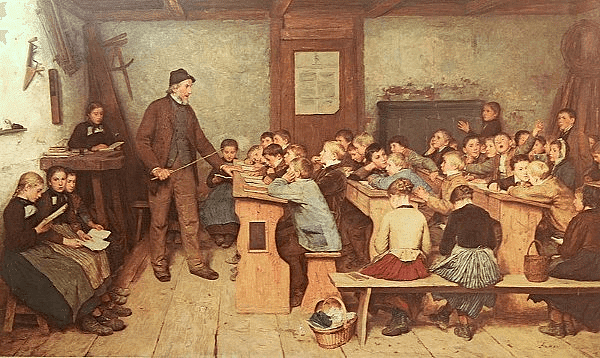 Ans: M Hamel wanted them not to forget French as it is the most beautiful, clear, and logical language in the world, and as long as they hold fast to their language, it would be as if they had the key to the prison.

Q9. Franz thinks, “Will they make them sing in German, even the pigeons?” What could this mean?

Ans: The Frenchmen were highly patriotic and took pride in their language. A strong feeling of revolt was in the air against the Germans. It shows that Franz did not accept their rule and thought they couldn’t tame pigeons.

Q11. What did M Hamel say about the French language?

Ans: M Hamel said that the French language was the world’s most beautiful, clearest, and logicallanguage, and therefore, it should be guarded and should not be forgotten by them. He also added that love with one’s language could be proven as the key to the prison for the people who are enslaved.

Q12. Why did villagers come to school that day?

Ans: The old men of the village came to the school that day to thank M Hamel for his forty years of faithful service. They also came to show their respect for the country that was theirs no more.

Q13. How did Franz find teaching and learning that day?

Q1. How did M Hamel react when Franz failed to recite the rule for the participle?

Q2. What does M Hamel tell about the significance and safeguarding of the French language? How does he conclude his last lesson?

Q3. What impression do you form of M Hamel based on your study of the story “The Last Lesson”?

Q4. Franz’s attitude towards school and M. Hamel changes when he learns about the takeover of his village by Prussians. Do you agree? Discuss with reference to the ‘Last Lesson’.

Q5. Give a brief description of M Hamel.

Q6. What is linguistic chauvinism? Is it possible to carry pride in one’s language too far?

The document Short and Long Answer Questions - The Last Lesson - Notes | Study English Class 12 - Class 12 is a part of the Class 12 Course English Class 12.
All you need of Class 12 at this link: Class 12
Attempt Now
Join Course