The document Simple Harmonic Motion & Uniform Circular Motion Notes | Study Physics Class 11 - NEET is a part of the NEET Course Physics Class 11.
All you need of NEET at this link: NEET

In this article we are going to explain the statement “Uniform Circular motion can be interpreted as a SHM.”.If we tie a stone to the end of a string and move it with a constant angular speed in a horizontal plane about fixed point, the stone would perform a uniform circular motion in the plane. If we observe the stone sideways, the stone will appear to perform a to and fro motion along the horizontal line with the other end of the string as the midpoint.Similarly, the projection of the motion or the shadow of the stone would appear to perform a to and fro motion perpendicular to the plane of the circle. Similar case was observed by Galileo, who discovered the four principle moons of the planet Jupiter moved back and forth relative to the planet, executing a simple harmonic motion. 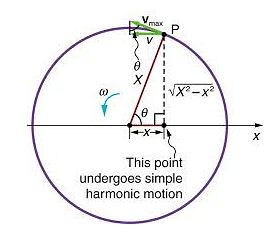 Suppose there are two particles A and B executing simple harmonic equation given below: 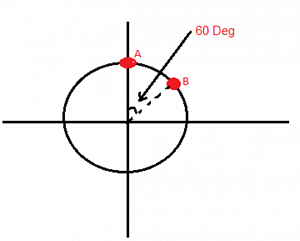 XA = A sin (ωt) XB = A sin ( ωt + π3)We have to calculate the time after which these two particles will meet for the first time. According to the given equation the system can be represented as below: If we analyze the projection of A and B we can say that both will meet somewhere when B is in fourth quadrant and A is first quadrant. But since both are rotating with same angular speed so angle between them will remain the same. So suppose they meet after A has moved an angle θ. It is shown in the figure below: 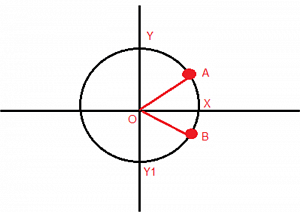 As A and B have same projection on x-axisso, ∠AOX = ∠BOX     …… (1)And we know, ∠AOB = π3    ……(2)Using (1) and (2) we have, ∠AOX = π6From this we conclude that the angle moved by A is π3 also its angular speed is ω.So time taken can be calculated as: t = π3ω sSimilarly we can say the period of oscillation is 2πω s. A similar question could be: after what time they will have same velocity for the first time? For this if we consider the above situation the magnitude of velocity will be equal but their direction is different so velocity cannot be equal. So for this case we analyze we can say that B will be somewhere in the third quadrant and A in fourth quadrant. Also their displacement from the mean position will be same in magnitude. 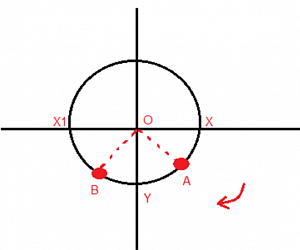 The document Simple Harmonic Motion & Uniform Circular Motion Notes | Study Physics Class 11 - NEET is a part of the NEET Course Physics Class 11.
All you need of NEET at this link: NEET