The document Solved Examples - States of Matter Class 11 Notes | EduRev is a part of the JEE Course Chemistry for JEE.
All you need of JEE at this link: JEE

Ex.1 When 2 gm of a gaseous substance A is introduced into an initially evacuated flask at 25oC, the pressure is found to be 1 atm. 3 gm another gaseous substance B is then added to it at the same temperature and pressure. The final pressure is found to be 1.5 atm. Assuming ideal gas behaviour, calculate the ratio of the molecular weights of A and B.

Sol. Let MA and MB be the molecular weights of A and B.

Ex.2 Which of the two gases, ammonia and hydrogen chloride, will diffuse faster and by what factor ?

Ex.3 The ratio of rate of diffusion of gases A and B is 1 : 4 and their molar mass ratio is 2 : 3. Calculate the composition of the gas mixture initially effusing out.

⇒ Mole ratio of gas A and B effusing out =  [moles ∝ pressure]

Ex.4 At 30oC and 720 mm of Hg, the density of a gas is 1.5 g/lt. Calculate molecular mass of the gas. Also find the number of molecules in 1 cc of the gas at the same temperature.

Another form of gas equation is PM0 = dRT

Ex.6 Assuming that the air is essentially a mixture of nitrogen and oxygen in mole ratio of 4 : 1 by volume. Calculate the partial pressures of N2 and O2 on a day when the atmospheric pressure is 750 mm of Hg. Neglect the pressure of other gases.

Sol. From Dalton's Law of partial pressure, we have

Ex.7 An open vessel at 27oC is heated until three fifth of the air has been expelled, Assuming that the volume of the vessel remains constant, find the temperature to which the vessel has been heated.

Sol. In the given questions, volume is constant. Also, as the vessel is open to atmosphere, the pressure is constant. This means that the gas equation is simply reduced to the following form :

Ex.8 When 3.2 gm of sulphur is vaporized at 450oC and 723 mm pressure, the vapour occupies a volume of 780 m, what is the formula for the sulphur under these conditions ?

Sol. The molecular weight = no. of atoms x atomic mass

So let us find the molecular weight of S from the data given.

Ex.9 A spherical balloon of 21 cm diameter is to be filled with H2 at NTP from a cylinder containing the gas at 20 atm at 27oC. If the cylinder can hold 2.80L of water, calculate the number of balloons that can be filled up.

(Note : the balloons are being filled at S.T.P.)

Ex.10 A mixture containing 1.12L of H2 and 1.12L of D2 (deuterium) at S.T.P. is taken inside a bulb connected to another bulb by a stop-cock with a small opening. The second bulb is fully evacuated; the stop-cock is opened for a certain time and then closed. The first bulb is found to contain 0.05 gm of H2. Determine the % age composition by weight of the gases in the second bulb.

Sol. In the first bulb :

Let n be number of moles of D2 effused.

In the second bulb :

Ex.11 The pressure in a bulb dropped from 2000 mm to 1500 mm of Hg in 47 min when the contained O2 leaked through a small hole. The bulb was then completely evacuated. A mixture of oxygen and another gas (B) of molecular weight 79 in the molar ratio of 1 : 1 at a total pressure of 4000 mm of Hg was introduced. Find the molar ratio of the two gases remaining in the bulb after a period of 74 min.

Assuming that gas B was present alone in the bulb. Let the rate of diffusion of B = RB.

From Graham's Law of diffusion, we have :

Let X0 and XB be the final pressure in the bulb after leakage for 74 minutes.

Ex.12 A 672 ml of a mixture of oxygen-ozone at N.T.P. were found to be weigh 1 gm. Calculate the volume of ozone in the mixture.

Sol. Let V ml of ozone are there in the mixture

Mass of oxygen at N.T.P.

Here masses of H2 and O2 are given, so one of them can be in excess. So first check out which of the reactants is in excess.

⇒ The total pressure PTotal at the end of reaction is given by :

Now partial pressure of A = mole fraction of A x PTotal

Ex.14 The compressibility factor for 1 mole of a van Waals gas at 0oC and 100 atm pressure is found to be 0.5. Assuming that the volume of gas molecular is negligible, calculate the van der Waals constant `a'.

⇒ The equation is reduced to :

Substitute the values of V and T :

Substituting the given values, we get :

If the gas behaves ideally, then using : PV = nRT

Ex.2 A truck carrying oxygen cylinders is filled with oxygen at -23oC and at a pressure of 3 atmosphere in Srinagar, Kashmir. Determine the internal pressure when the truck drives through Madras, Tamil Nadu. Where the temperature is 30oC -

Ex.6 5gm of XeF4 gas was introduced into a vessel of 6 litre capacity at 80oC. What is the pressure of the gas in atmosphere -

Ex.8 A mixture of gases at 760 mm pressure contains 65% nitrogen, 15% oxygen and 20% Carbon dioxide by volume. What is the partial pressure of each in mm -

Ex. 10 The total pressure of a sample of methane collected over water is 735 torr at 29oC. The aqueous tension at 29oC is 30 torr. What is the pressure exerted by dry methane -

Since Helium is monoatomic so

Ex.13 What is the temperature at which oxygen molecules have the same r.m.s. velocity as the hydrogen molecules at 27oC -

Ex.14 Calculate the total kinetic energy in joules, of the molecules in 8 gm of methane at 27oC -

Total energy of 8 gm of methane

Ex.15 Calculate the root mean square velocity of SO2 at S.T.P. -

Ex.16 Calculate the number of atoms in 1 g of helium

Ex.19 3 moles of a gas are present in a vessel at a temperature of 27oC  . Calculate the value of gas constant (R) in terms of kinetic energy of the molecules of gas -

(D) None of these

Ex.20 In the following diagram, container of NH3 gas and container of HCl gas, connected through a long tube, are opened simultaneously at both ends; the white NH4Cl ring first formed will be at Q point. If OP = 40cm, then find OQ -

Similarly in the same time,

From Graham's Law of diffusion

Ex.21 The root mean square velocity of hydrogen is times than that of nitrogen. If T is the temperature of the gas, then :

Ex.23 Calculate relative rate of effusion of O2 to CH4 through a container containing O2 and CH4 in 3 : 2 mass ratio.

Ex.24 At what temperature will average speed of the molecule of the second member of the series CnH2n be the same of Cl2 at 627oC  ?

Ex.27 If one mole each of a monoatomic and diatomic gases are mixed at low temperature then CP/CV ratio for the mixture is :

Thus, for mixture of 1 mole each,

Ex.30 The intercept on y-axis and slope of curve plotted between P/T vs T

Sol. [B] Intercept on y-axis

Ex.32   7 moles of a tetra-atomic non-linear gas `A' at 10 atm and T K are mixed with 6 moles of another gas B at K and 5 atm in a closed, rigid vessel without energy transfer with surroundings. If final temperature of mixture was  K, then gas B is ? (Assuming all modes of energy are active) 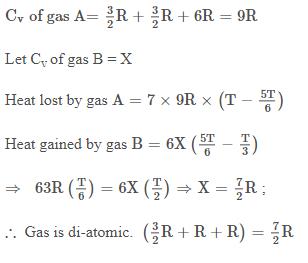