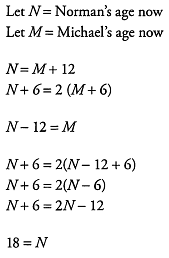 Ques 7: Toshi is 7 years older than his brother Kosuke, who is twice as old as their younger sister Junko. If Junko is 8 years old, how old is Toshi?Ans: 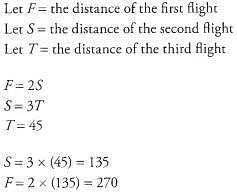 Ques 9: It costs a certain bicycle factory $10,000 to operate for one month, plus $300 for each bicycle produced during the month. Each of the bicycles sells for a retail price of $700. The gross profit of the factory is measured by total income from sales minus the production costs of the bicycles. If 50 bicycles are produced and sold during the month, what is the factory's gross profit?Ans:

Section - 3Translate and solve the following unit conversion problems.Ques 12: An American football field is 100 yards long. What is this length in feet? (1 yard = 3 feet)Ans:

Because the two terms we’re multiplying contain, collectively, one decimal place, include a decimal place in the product. That is, place the decimal not at the end (968.) but between the 6 and the 8 (96.8).

Ques 15: The weather man reported that Boston received 2.25 feet of snow yesterday. How many inches of snow did Boston receive? (1 foot = 12 inches)Ans:

The car has 10 liters of fuel in the tank.

Section - 4Translate and solve the following rate problems.Ques 18: Jiang begins driving away from Marksville at a constant speed of 64 miles per hour. How far will she be from Marksville after 2 hours and 15 minutes?Ans: The D = R T formula allows us to solve for Jiang’s distance. Note that the time must be converted so that it is expressed only in hours rather than hours and minutes.

Since Tom traveled 120 miles during the first portion of his journey he has 180 - 120 = 60 miles to travel during the second part. We know that, during this portion, he traveled at 45 miles per hour, allowing us to use the D = RT equation to calculate how long this portion of the journey took. 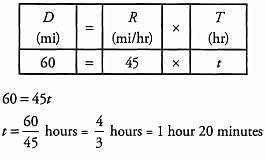 Tom s entire journey took 3 hours and 20 minutes: 2 hours for the first portion and 1 hour 20 minutes for the second portion. Finally, we must add 3 hours and 20 minutes to Toms starting time of 1:00 pm to calculate when Tom completed his journey, 4:20 pm.Ques 20: If Roger walks to a store that is 3 miles away in 2 hours, and then runs home along the same path in 1 hour, what is Roger's average rate, in miles per hour, for the round trip?Ans:  We can find the average rate by dividing the total distance traveled by the total time spent traveling. In this case, Roger travels 3 miles to and back from a store, covering a total of 6 miles in 3 hours. Thus, we can calculate his average rate using the relationship