The document Special Theory of Relativity (Part -1)- Classical Mechanics, CSIR-NET Physical Sciences Physics Notes | EduRev is a part of the Physics Course Physics for IIT JAM, UGC - NET, CSIR NET.
All you need of Physics at this link: Physics

In this chapter we review the relevant aspects of classical mechanics, and the issues that led to the Special Theory of Relativity.

will go over to

It can be worked out that the relation between S and S ′′ is again of the same form. I.e.,

Thus, if one considers the set of all possible transformations of the type Eq. (1.1), it forms a group under composition - the 10-parameter Galelian group.

Moral: Equations of mechanics preserve their form under Galelian transformations. Or simply, mechanics pocesses Galelian group symmetry, or is Galelian invariant.Practically this means that we can write and follow the same equations, using one’s own lab coordinates, irrespective of our reference frame.

1.2 Maxwell’s equations do not agree

The results of the previous section constitute what is referred to as Galelian/Newtonian/Classical relativity, and consequently a relativity principle - a belief that laws of physics must be same in al l inertial reference frames, wherein the reference frames are related by transformations of the type Eq. (1.1).However, Maxwell’s equations of electrodynamics do not show this invariance. Under the transformation x′ = x − v0t, y′ = y, z′ = z andes t′ = t, we have Consider the wave equations in vacuum for the electric and magnetic ﬁelds, propagating in the

The solution is a Electro-Magnetic wave with velocity of propagation

There are three possible resolutions to the issue:

1. Mechanics is ﬁne and Galelian relativity is valid. But Maxwel l’s equations are wrong. If this is so then ﬁrst of all we must be able to show this experimentally, and hopefully correct the equations to the ones that show the symmetry.

2. Mechanics is ﬁne and Maxwel l’s equations are ﬁne. But the relativity principle does not exist for electrodynamics. If this is true then doing physics will be tough. For, we may have to write up diﬀerent equations for each geographical location or even each day. However, if this is indeed true we must be able to conﬁrm this experimentally.

Every eﬀort, running over several decades, along these two lines showed a negative result.

Maxwell’s equations were valid to the best of accuracy. The special reference frame could not be found. Curiously enough, as was mentioned earlier, the speed of light was found to be the same irrespective of the velocity of the source, or the observer2

3. Maxwel l’s equations are ﬁne and a relativity principle exists. But, the expressions as in Eq. (1.1) are wrong.The third possibility was the one investigated by Einstein, and the one that resolved all issues.

We shall deliberately ignore the chronological development of the theory 1, and start directly from the answer.

The resolution came in the form of two (just two!!) postulates.

PI. The principle of relativity: Laws of physics must be the same in all inertial reference frames.

Though this assertion may sound nothing new, it has to be appreciated that, ﬁrst of all, this is a postulate. Besides, the change is in its privilege, now as an apriori assertion.The second postulate brings in some fundamental changes in our notion of space and time.While the following sections in this chapter are devoted to a more detailed discussion on these aspects, we shall brieﬂy deﬁne the bare minimum ﬁrst, just enough material to state the postulate.The special theory forces us to look upon space and time not independently, but as a space-time continuum. Just as we speak of a point in 3-space given by 3-coordinates, we have Events(noun) designated by 4 coordinates - 3 spacial and 1 temporal. Thus we have a 4-dimensional space-time, and every space-time point is deﬁned as an ’Event’. For a start it may be convenent to think of these Events as usual events(verb).Consider two Events in space-time, say

(say two ﬁrecrackers bursting in the sky at two diﬀerent points at diﬀerent times). Contrary to our usual notion that time intervals

are independently invariant in any reference frame, we have

PII. The space time interval between two Events, deﬁned as

is an invariant in any inertial reference frame, where ′c′ is a universal constant whose value is roughly 3 × 108 m/s.

I.e., if the same two events are in another inertial reference frame designated by the space-time coordinates

The speed of light happens to be ′c′.The remaining part of the course will be conﬁned to convincing ourselves that the special theory does indeed resolve the issues discussed in the previous chapter, and make the relevant changes in Newtonian mechanics. However, as mentioned earlier, PII changes our notion of space and time fundamentally. This chapter will detail these changes.

In classical relativity, the instantaneous position of a particle, or an ob ject, is speciﬁed by its space coordinates, and its time evolution is illustrated by a tra jectory it traces out in space. But, PII puts space and time in equal footing, thus prohibiting looking upon the two independently. Consequently, The tra jectory of, say, a particle in space becomes a tra jectory connecting space-time ’Events’. Such a tra jectory shall be called a ’World Line’. The four coordinates do not have the same dimension, however. This is taken care of by scaling the time axis with the universal constant ′c′.A few examples are shown in Figures 2.1 and 2.2. 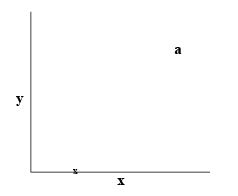 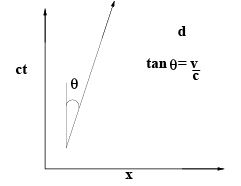 Thus even an ob ject at rest is represented by a line. In some sense, even an ob ject at rest is moving in space time. Two observations are immediate: a) Ob jects in uniform motion in a inertial (henceforth a default unless speciﬁed explicitly) reference frame are represented by straight world lines in the space-time diagram drawn in any reference frame. b) Ob jects that are accelerating will have curved world lines. More speciﬁcally, the acceleration at a point (ct, x, y, z ) will be given by the curvature of the world line at that point.

Consider two events A and B , with coordinates (ct1, x1) and (ct2, x2) (y and z coordinates being same for simplicity) in a reference frame S . Say an ob ject starts at A and reaches B with uniform velocity v in the

direction as in Figure 2. Then

and the velocity of the ob ject v′. From PII we have

or simply, one gets back Galelian relativity. Indeed, practically relativistic eﬀects are signiﬁcant only at velocities of the order 0.5c and more.

Objects with velocity c are special

Suppose the ob ject in the previous section is moving at speed v = c in S . Then evidently,

and v′ = c. I.e., if an ob ject is moving at speed c in some reference then it moves with the same speed c in all reference frames. Ob jects traveling with speed c are treated by space-time with a little added privilege. Hence, the velocity of light in vacuum being c, will be the same as seen from any reference frame, just as several experiments had suggested.2 Indeed, from Eq. (2.4) it follows that an ob ject moving with a speed less than (greater than) c in one reference will be seen to be moving with a speed less than (greater than) c in any reference frame. In fact, the invariance of the space-time intervals allows us to classify them into three types based on their sign: 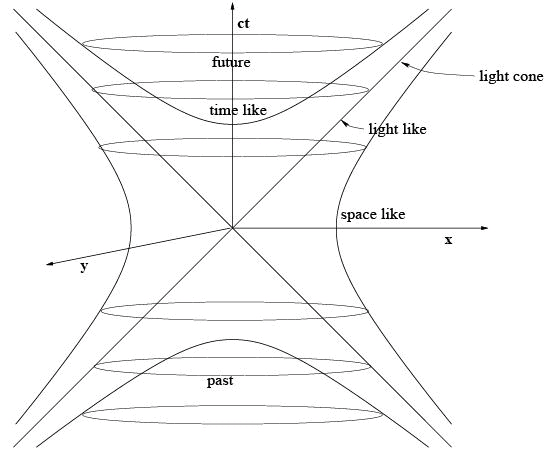 Figure 2.3: The light cone attached to an event in space time (origin). The events in the future fall inside the cone in the +ve t direction. The events outside the cone are space like seperated from the origin and are not accessible. If a future event falls on the paraboloid inside the cone, then in any other reference frame (with the same origin) the event will be some other point in the same paraboloid. The actual structure is 4 dimensional. z direction is suppressed for simplicity.

An important observation with respect to time like and space like separated events concerns their time ordering. Suppose B and A are time like separated, and say t > 0, i.e, A precedes B in frame S . Then in any frame the time ordering is preserved. Causality is preserved if the events are time like separated. However, if A and B are space like separated, then it is possible that A precedes B in frame S , while B precedes A in S ′ or some other reference frame. Event B could be at B 1(see ﬁgure) in one reference frame and B 2 in another. Notice the diﬀerence between Newtonian causality and Einstein’s causality. In Newtonian causality, A and B 1 are causally connected. However, in Special relativity they are not, as in some other reference frame B 1 could be B 2. Figure 2.4: Event B might transform to B ′ in some other reference frame S ′. However, the time ordering between events A and B is preserved (A′ = A). This is true for any two events that are time like separated. But the same is not true for events C and A, which are space like separated.C transforms to C ′ in S ′. Since the time ordering is reversed, A precedes C in S , but is reversed in S′

The ticking of the clock at intervals t1, t2, .. are the events denoted by the dots along the time axis.The space time interval between the ﬁrst two ’ticks’ is given by.

Let S ′ be a reference frame moving with speed v in the x direction with respect to S . The two ticks of the clock in this reference frame do not happen at the same point in space. Let the two events in this frame be

(we do not bother about the y′, z ′ coordinates since they are same as the unprimed ones, the motion being in the x direction). The space time interval in this frame is given by

Since the two intervals are same by PII, it follows that

So, the times shown by a moving clock will be different from the one it shows when it is at rest. It can be seen that

is the time interval between two ’ticks’ in a frame in which the clock is moving. From Eq. (2.13) it follows that