What is Crystal Field Theory?

the net change in crystal energy resulting from the orientation of d orbitals of a transition metal cation inside a coordinating group of anions also called ligands.

Crystal field theory was established in 1929 treats the interaction of metal ion and ligand as a purely electrostatic phenomenon where the ligands are considered as point charges in the vicinity of the atomic orbitals of the central atom. Development and extension of crystal field theory taken into account the partly covalent nature of bonds between the ligand and metal atom mainly through the application of molecular orbital theory.

In order to understand clearly the crystal field interactions in transition metal complexes, it is necessary to have knowledge of the geometrical or spatial disposition of d orbitals. The d-orbitals are fivefold degenerate in a free gaseous metal ion. If a spherically symmetric field of negative ligand filed charge is imposed on a central metal ion, the d-orbitals will remain degenerate but followed by some changes in the energy of free ion.

A summary of the interactions is given below.

When transition metals are not bonded to any ligand, their d orbitals are degenerate that is they have the same energy. When they start bonding with other ligands, due to different symmetries of the d orbitals and the inductive effect of the ligands on the electrons, the d orbitals split apart and become non-degenerate.

Splitting of d-Orbital Energies in an Octahedral Fields: 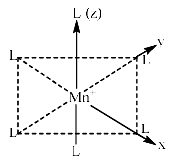 The set of dx2 – y2 and dz2 orbitals is referred to as eg set which is doubly degenerate and the set of dxy, dyz and dzx orbital is referred to as t2g set which is triply degenerate.The separation of five d orbitals of metal cation into two sets of different energies is called crystal field splitting. The energy difference between two sets of orbitals which arise due to an octahedral field is called ∆o or 10 Dq, where o in ∆o stands for octahedral. 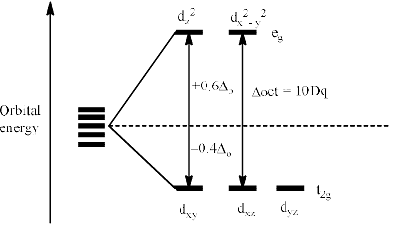 This is calculated as follows: