Splitting of d Orbital Energies in Fields of Other Symmetry 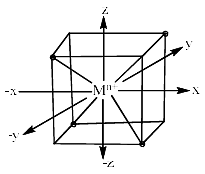 Therefore, the dxy, dyz and dzx orbitals of metal cation experience more repulsion and of higher energy than t hose of dx2 – y2 and dz2 orbitals. After splitting, the dxy. dyz and dzx destabilize (t2 set) b y a factor of 0.4 ∆t and the dx2 – y2 and dz2 orbitals (e set) are stabilized by 0.6 ∆t. The difference in energy of t2 and e set is denoted as ∆t where t stands for tetrahedral. The crystal field splitting in tetrahedral complexes is shown below.

(a) In octahedral there are six ligands whereas in tetrahedral low ligands come to interact with metal ions. Hence the repulsion decreases by a factor of

(b) In octahedral, all the six ligands come along the axes while in tetrahedral they come between the axes. Therefore, again repulsion is decreases by a factor of

To these two factors, the crystal field splitting decreases I tetrahedral by a factor of 4/9 than in octahedral i.e.

The CFSE values for various configurations of tetrahedral complexes are given in the following table.

A square planar arrangement of ligands can be formally derived from an octahedral array by removal of two trans ligands. 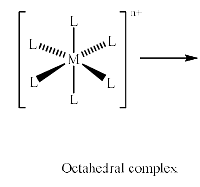 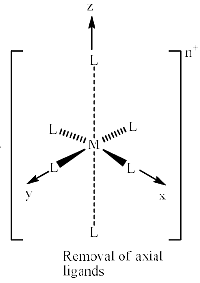 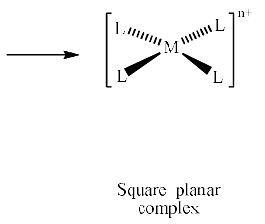 If we remove the ligands lying along the z axis, then the dz2 orbital is greatly stabilized; the energies of the dyz and dxz orbitals are also lowered, although to a smaller extent. The resultant ordering of the metal d orbitals is shown below: 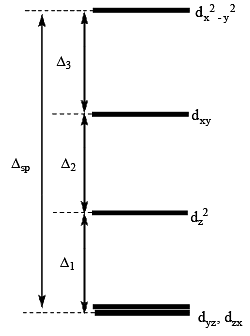 The fact that square planar d8 complexes such as [Ni(CN)4]2– are diamagnetic is a consequence of the relatively large energy difference between the dxy and dx2 – y2 orbitals. 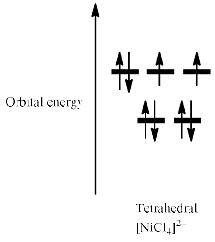 Thus, [NiCl4]2– is paramagnetic while [Ni(CN)4]2– is diamagnetic. Alt hough [NiCl4]2– is tetrahedral and paramagnetic, [PdCl4]2– and [PtCl4]2– are square planar and diamagnetic. This difference is a consequence of the larger crystal field splitting observed for second and third row metal ions compared with their first row congener; Pd(II) and Pt(II) complexes are invariably square planar.

Crystal field splittings for some common geometries with the relative splittings of the d orbitals with respect to ∆o is given below. But this comparison is only valid for MLx type complexes containing like ligands, and so only applies to simple complexes. 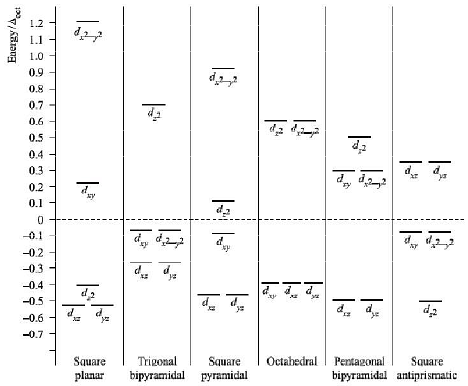