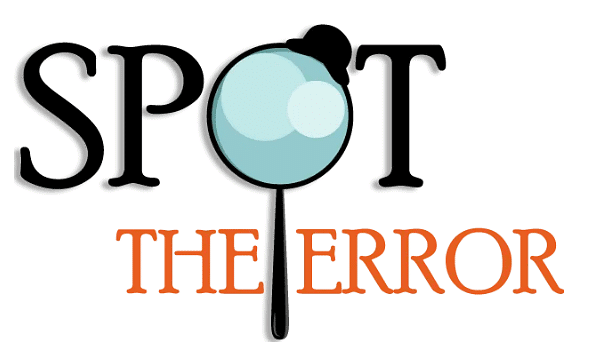 What is Error Spotting?

In error spotting, one has to spot an error in the sentences provided. The error can be anything like nouns, to pronouns, or any other grammatical mistake in the sentence.

Common Errors & Rules to Spot Them

A noun is used to identify a place, person, and thing. It can be singular and plural but the verb used for them differs from singular to plural.

1.5. Certain nouns, especially of the collective category, are used as singular when they specify a unit.Example: Public, team, committee, government, audience, orchestra, company, jury.(i) The public were unanimous in their opinion. (Incorrect)The public was unanimous in its opinion. (Correct)

1.6. Certain nouns, especially of the collective category, are used in the plural when they specify a difference of opinion or class (i.e. not used as single unit).Example: Public, team, committee, government, audience, orchestra, company, jury.(i) The jury was divided in its opinion. (Incorrect)The jury were divided in their opinion. (Correct)

(ii) The resources was divided based on its expertise. (Incorrect)

The resources were divided based on their expertise. (Correct)

Each of the players performed well in the match.(Correct)

(iii) None of the student scored above 90% in boards.(Incorrect)

None of the students scored above 90% in boards.(Correct)

A pronoun is a word that refers to the noun in the sentence in case of possession.

An adjective is a word that represents the specialty, merits, demerits, quality, and fault of a person, place, or thing.

3.1. Instead of ‘who’ or ‘which’, the relative pronoun ‘that’ is used after adjectives in the superlative degree

Adverb is a word that modifies the meaning of an adjective or verb. Some of the adverbs have the same meaning and create confusion in people’s mind.

A verb is an action or state of being in a sentence. Verbs can be expressed in different tenses, depending on when the action is being performed.

Example: Jennifer walked to the store.In this sentence, walked is the verb that shows action. It happened in the past, so it is a past-tense verb.

5.5. Use Present Continuous tense rather than simple present tense, when the recurring action is problematic.

(i) She always hits me without any reason. (Incorrect)

She is always hitting me without any reason. (Correct)

5.6. If, in a sentence, two action clauses are to take place in the future, use simple present tense for the conditional clause and simple future tense for the other clause.

(i) The moment she will enter the room, we will start singing the birthday song. (Incorrect)

The moment she enters the room we will start singing the birthday song. (Correct)

(i) If Jacob would have called me. I would have picked him up from the airport. (Incorrect)

If Jacob had called me, I would have picked him up from the airport. (Correct)

Other Errors & Rules to Spot Them

2. Subject-Verb Agreement: The subject should agree with the verb. For a singular subject, we use a singular verb and for a plural subject, we use a plural verb.Example: A number of colorful glass vases was displayed in the store window. (Incorrect)A number of colorful glass vases were displayed in the store window. (Correct)

4. Modifiers: A modifier is any word or phrase which modifies the subject. The modifier has to be placed next to the subject it modifies.Example: Covered in mud, Mark helped the puppy. (Incorrect)Covered in mud, the puppy was helped by Mark. (Correct)

(i) What type of the books you like to read? (Incorrect)

What type of books do you like to read? (Correct)(ii) What sort of an insect is that? (Incorrect)

What sort of insect is that? (Correct)