Stability of feedback control systemFrequency response analysis is an useful tool for designing feedback controllers. It enables the designer to study the stability characteristics of a closed loop system using Bode or Nyquist plots and also to select the appropriate design values of controller parameters.

It is also worth to study the Bode diagram of PID controller in the following figure.

The PID controllers have the following characteristics:

It is left to the reader to exercise how to arrive at above eqs. Note that the PID controllers ideally have three asymptotes.

with a zero slope.

Bode diagram of Processes in seriesLet us have a control loop with two components, viz ., one PI controller and one first order plus dead time model.

The open loop transfer function is

The above open loop transfer function is a combination of four individual processes in series, viz., pure gain, pure dead time, first order system and PI controller. Two time constants are observed in the series that would yield the location of corner frequencies viz ., 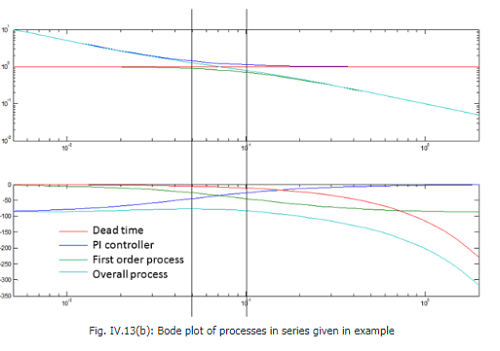 The above figure shows the Bode plot of the open loop process indicated in this example. AR and phase shift for all individual transfer functions as well as the overall transfer function have been indicated along with the location of corner frequencies.

Bode Stability CriterionConsider a simple first order plus dead time process to be controlled by a proportional controller:

The open-loop transfer function for this system is given by

The Bode plot of the above open loop transfer function is given by the following figure. 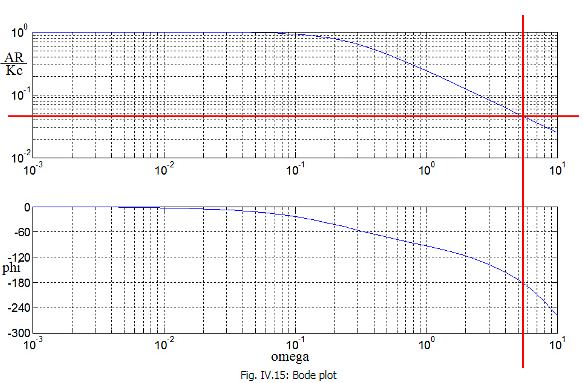 We are interested to know the frequency where the phase shift is -1800. Numerically it can be solved by the equation

and the value of AR/2Kc at

is observed to be 0.0463 which can also be found numerically by,

one needs to set the value of Kc as,

At this juncture, one needs to perform a thought experiment in order to understand the Bode stability criterion. Let us set the value of controller gain, Kc = 10.8 and let us “open up” the feedback loop as indicated in the figure before. Suppose, we vary the setpoint as a sinusoidal function

. As the loop is open, the error will be equal to the setpoint

and thereby yield an output,

•  The setpoint perturbation is stopped

•  The feedback loop is reconnected

Then, the error signal will remain as

. In other words, the response of the system will continue to oscillate with constant amplitude even when the setpoint signal is withdrawn.

Alternatively, if we choose the value of controller gain less than 10.8 , (say Kc = 8) then

If we repeat the above thought experiment, the output signal will take the form

Upon closing the loop and withdrawing the setpoint perturbation, the new value for the error for the next cycle will be

that will eventually yield an output response of

and so on. It is evident that the amplitude of the error signal would diminish at every cycle and eventually lead to zero.

The same thought experiment would lead to ever increasing error signal because the amplitude ratio is greater than 1.

. The output response shows a sustained oscillation with a time period

at this combination. Any frequency,

, will lead to oscillation with increasing amplitude and eventually will lead to instability. Hence, the frequency

is termed as the crossover frequency , the gain value Ku is termed as ultimate gain and Pu is called the ultimate period of oscillation of the closed loop system.

The conclusion drawn from the above thought experiment is the Bode Stability Criterion and can be stated as follows -A feedback control system is unstable if the amplitude ratio of the corresponding open loop transfer function is greater than one at the crossover frequency. The value of controller gain is the decisive factor in order to ensure its stability.

It is further understood from eq. (72) that large dead time leads to smaller value crossover frequency. In other words, even a low frequency signal will be able to destabilize such process.