From the foregoing discussion it may be apparent that a chemical reaction may be carried out in diverse ways by changing temperature, pressure, and feed composition. Each of the different conditions would involve different conversions and heat effects. Thus there is need to define a “standard” way of carrying out a reaction. If all reactions were carried out in the same standard manner, it becomes possible to compare them with respect to heat effects, and equilibrium conversion under the same conditions. In general all reactions are subject to heat effects, whether small or large. A reaction may either release heat (exothermic) or absorb heat (endothermic). However, it is expected that the heat effect will vary with temperature. Thus, there is a need to develop general relations that allow computation of the heat effect associated with a reaction at any temperature.

Consider a reaction of the following form:

The stoichiometric numbers are written as follows:

The standard enthalpy of reaction

at say at any temperature T is defined in the following manner: it is the change in enthalpy that occurs when

moles of A1 and

— Gases: the pure substance in the ideal gas state at 1 bar

— Liquids and Solids: the pure liquid or solid at 1 bar

The conceptual schema of a standard reaction is depicted in fig. 8.1. All reactants enter and products leave the reactor in pure component form at the same temperature T, and at their respective standard states. In the literature, data on the standard enthalpy of reaction is typically reported at a 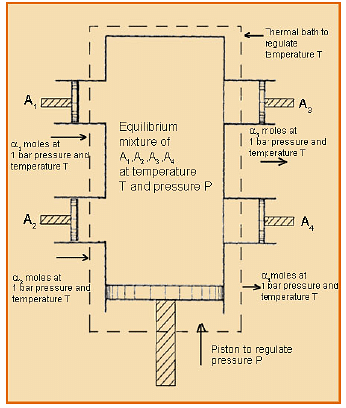 temperature of 2980  K Using the sign convention adopted above, the standard enthalpy of reaction at any temperature T may be mathematically expressed as follows:

is the standard state enthalpy of species ‘i’ at the temperature T, and the summation is over all the reactants and products. For example, on expansion the eqn. 8.2 takes the following form for the reaction depicted in eqn. 8.1

If we further consider that each molecular species ‘i’ is formed from j elements each, an expression for the standard enthalpy of formation results:

In such a case eqn. 1 becomes:

Values of Standard Enthalpy of formation of select substances are shown in Appendix VIII. For simplicity in the subsequent equations we drop the subscript T, but implicitly all terms correspond to temperature T. Now writing H i0 in a differential form:

is the specific heat of the ith species corresponding to its standard state. Note that since the standard state pressure for all substances is 1 bar in terms of pressure, for gases

, while for liquids and solids it is the actual value of the specific heat at 1 bar

Since the specific heat of liquids and solids are weakly dependent on pressure, it helps write eqn. 8.6 in the general form shown. The following summation may be applied on eqn. 8.6 to give:

Since each ξi is constant one may write:

Note that since the standard state pressure is always at 1 bar, for all species one may write the general form of relation for specific heat capacity:

In continuance of the foregoing considerations one may also define a standard Gibbs free energy change of a reaction. As we will see in the later sections, this property is essential to computing the equilibrium constant for a reaction at any temperature. As with enthalpy of reaction (eqn. 8.2) the standard Gibbs free energy change at any temperature is given by the function:

is the difference between the Gibbs energies of the products and reactants when each is in its standard state as a pure substance at the system temperature and at a fixed pressure. Thus, just as the standard enthalpy of reaction is dependent only on temperature (the standard state pressure being fixed by definition), so is the Gibbs free energy change of a reaction. It follows that when the temperature is fixed

is independent of the reaction pressure or composition. Indeed extending the argument, one can define any standard property change of reaction by the same expression; all being functions of temperature alone:

Multiplying of both sides of this equation byα i and summing over all species one obtains:

This may be written as:

If we know the standard Gibbs free energy change

at a particular temperature T0 (typically, values are reported at 2980K the above equation may be integrated as follows: